Most of February has been a bit of a wash-out hasn’t it? I’m talking about the weather of course.

But is it me, or does the weather have a direct effect on how we’re feeling, our energy levels, how much we do and the day-to-day decisions we make in general? I believe so.

There has been a lot of illness going round, people complaining of tiredness and no energy and a feeling of dread as you realise it’s a school day and you have to drag yourself out of bed extra early to get things done before the kids start waking.

It’s February, but I have to say….I’m willing for spring to make an appearance – and pronto.

An interiors company got in touch to see if I’d like to collaborate on a blog post and they gave me full scope to come up with my own post – I love it when brands leave the decision-making up to me as it makes life much easier to fit in with my blog and my voice.

I was also contacted by a men’s clothing company to see if I can put an outfit together for the man in my life. Well, I knew that VIP wouldn’t help in terms of modeling clothes, but I knew another (young) man that would – my 13-year old son, Luis.

He was thrilled about the whole project and would ask me every couple of days when the clothes would arrive. I did say there was a condition to him getting the new clothes – and that was that he’d have to model them for me. I’m thrilled as he hates the idea of me taking photos of him, so I think we’ve reached a compromise. Blog post coming soon!

I also did a social media ad on Instagram for Marbonne teeth whitening strips – you might have seen me grinning to show off my gnashers! I was actually really impressed with the results – so much so that I thought I’d feature it in my January Favourite Finds post.

I didn’t meet a sausage this month (see ‘Out and About’ which explains why), but I have been busy working on side hustles, so I haven’t been overly fussed about getting out.

There are a lot of bloggers or influencers that I’d love to get together with again soon though as it feels like ages since I’ve seen them – Laura from Loopy Lou Laura, Laura from Side Street Style, Alejandra from Alejandra’s Life, Helen on Instagram as Just Helen Marie, Susie from So Happy In Town, Cecilia on Instagram as TamTam1936 and Ana from Faded Spring.

And that’s just the start of them – trust me, there’s plenty more!

I received an email to tell me that my blog had been featured in ‘Top Interior Design Blogs That Rock The Web' on Wow Cushions’ website, which was a nice surprise.

As I took on my biggest project to date this year (more details in my March Blogging Month), a few posts have fallen by the wayside. I expected this to be honest as I didn’t want to bite off more than I could chew.

So actually, although I’m not pushing out that many posts or making headway on the HIBs chart, I’m okay with that.

It was nice to get an email from YouTube detailing my channel statistics. I seem to get these sporadically, but I always think it looks more impressive.

I made 2 videos this month including my visit to Lebanese and Middle Eastern restaurant, Comptoir Lebanais (as they’ve launched a new Vegan feast priced at the very affordable price of £12.95!)

I popped along with Kerry from from Kerry, Life and Loves and we both thoroughly enjoyed the meal.

And the second video was a Home Bargains haul which Girlwrighter joined me in making, which was lovely.

The blog collaborations agreed this month totalled £350, although I won't see the money until March. I also received £100 worth of men’s clothes (for my son) from Jacamo and teeth-whitening strips from Marbonne.

Other income streams in February:
– JustPark £121.52 (I rent my driveway for parking and also use JustPark for when I’m visiting hospitals, town centres, stadiums, airports etc) here’s £10 to get you started!

– Top Cashback: I didn’t buy anything online this month, so didn’t earn any cashback, but this is a great side hustle and it's how I earn FREE cash for shopping online! Check it out for yourself.

For affiliate links (which I’m not doing overly well on at present), I earned £2.45 from Amazon and a few pounds from Viglink which wasn’t expected. It all helps though!

It was a quiet month in terms of getting out and about for the blog this month – the awful weather didn’t help, plus the fact that my daughter was off school for a few days with the nasty bug that was going round – and then when she went back, my son caught the bug and was off for a few days.

We went to Deal in Kent for a short break during half term and I was glad that I hadn’t collaborated with anyone to be honest, as it meant that I could just relax and enjoy a couple of days away.

I got a mention on Twitter from Russell Hobbs a couple of weeks ago – and then engaged in conversation with Primark. I like it when the big brands take the time to get to chat with you on social.

I know they employ people to do this 24/7, but imagine how many hundreds of people they are liaising with all day….must be exhausting! 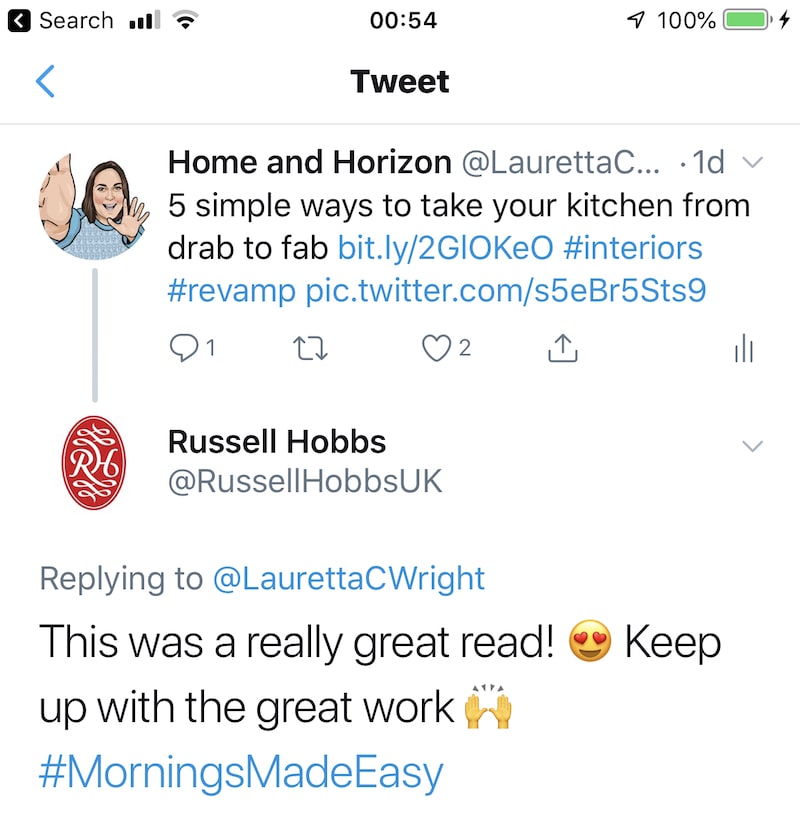 I also received a very nice email from BritMums. I’m their round-up editor for the Shopping Hauls section and wrote a post on how the High Street has changed.

Nadine (who is BritMums’ blog editor) sent me a few nice words….

Thank you first of all for getting your Shopping Haul round-up to me early so I can schedule before half term – it is really appreciated.

But the main reason for my email is to say ‘Well done'!  And I have CCd in Susanna and Jen too so they can see!  I really enjoyed the style you created for your post this month – I think an opinion piece about the ever changing High Street is great and you are perfectly positioned to comment on this.

This is exactly the kind of thing we wanted when we floated the idea of being a columnist a while ago – rather than always doing round-ups each time.  We still like round-ups but we also like these kind of ‘stand alone' pieces and I thought you picked a very timely and interesting subject.

Well done and feel free to think of more like this for the future!

February At A Glance

What was great?  Going to Deal for a couple of days.
What wasn’t? Forgetting to sell more of my Belstaff clobber.
Goals for March: Not to be too hard on myself.

A Pin For Your Blogging Board

Excellent – a great month for you

A good month with lots of little bits happening during the month too. There is so much illness going around, hope everyone is getting better

Hi Lauretta, I’m so glad that my email to you made you happy this month!!
Also, I wanted to ask – you are doing great with renting your driveway…. Do you like near a large city or sporting venue? I always wonder how feasible it would be to make any money doing this if you are just on a typical suburban street….

Apologies Nadine – I didn’t see this until now! Living close to a hospital certainly helps me with renting the driveway, but if you live on a road with parking restrictions, there’s no reason why you can’t rent your driveway out to make money. JustPark works well for things like shopping centres/high streets, train stations etc… it might be worth a go in putting your drive on there…nothing to lose!

What an incredible month it has been for you, YT seems to be doing ok and that comment from Hobbs {and Primanie} just makes it even more special.
Anosa recently posted…Bucketlist Destination Thailand|Phuket Adventures

Thanks Anosa – yes, that was a nice touch receiving the messages from the brands. I’m aiming for the magic 1,000 subscribers on YT so that I can (finally) start monetising my channel. I’m not sure if you get there and then dropped subscribers if they still keep it monetised or if you lose it…one to ask people!

Sounds like you have had a super busy month for sure. Clearly staying focused and good to go for more blogging xx

I’ve been sidetracked a bit lately, but hopefully it’s a minor blip!

Sounds like you’ve had a very mixed month but managed to push through and get a lot of work done. I hardly done anything in February with my blog as like you I’ve had a very poorly daughter.

I somehow don’t know how I managed to do that Kirsty! ha ha. I have a feeling March isn’t going to be quite so productive, but I could be wrong! Thanks for popping by x

Sounds like you had a great month Lauretta. Congratulations on your continued success. I’d love to be one of the people you meet up with one of these days!

Ah, me too Carol – that would be awesome. We’ve known each other for a while now and seems wrong that we haven’t managed to get together! If you do ever come to London, please let me know as I’d love to hook up! I hope you and yours are well Carol x

Sounds like you had a great month. Blog wise for me my stats were terrible but I was on holiday for a good chunk of the month

Thanks Kara. I always find that whenever I step away from the blog for a few days that my stats seem to take a nosedive. Same with social media come to think of it!

Sounds like a good month for you, I think it’s good when brands let you have the choice of what to write about with collaborations x

Yes, I couldn’t agree more Rhian. In fact, I wouldn’t opt into a collab unless I could have free reign on what to write – it just helps keep our blogs consistent doesn’t it?

I love reading these monthly reports of yours, it is always nice to see how other bloggers are getting on.

Thank you Mellissa – that’s lovely to hear. I enjoy doing them and knowing that I’m helping others. Thank you for reading and commenting.

What a great way to track your success and income. I too have let a few posts fallen by the wayside recently, I really need to get back on it!

Thanks Micaela – it’s easier said than done isn’t it?! I find it easier just to focus on one at a time – and write a list of priorities. Good luck with yours!

What a great way to show your progress with your blog. I am currently trying to up my blog income as a side hustle so it’s great to see what others are doing.

Thanks Leah – it’s swings and roundabouts to be honest, but we do what we can do don’t we? Apart from the sponsored posts and affiliate links, some bloggers go on to write ebooks and have digital e-courses to bring in more money, but it’s tricky finding time to dedicate to such things..