5 Things To Do In Dorset On A Whim!

VIP and I ventured on a whistle-stop tour of Dorset where, in just 48 hours, we managed to take in a number of sightseeing locations, ate at some lovely cafés and restaurants and people-watched to our heart’s content.

Here’s a snapshot of the best places we researched or simply stumbled upon, so that you too can enjoy the best of what Dorset has to offer on a micro break…

We were lucky enough to stay at the grade II listed Summer Lodge in the sleepy little village of Evershot (the second highest village in Dorset). And what a night!

The venerable old building and village also has connections with the 19th century author, Thomas Hardy. It's in a great location – away from the life's daily pressures, so it's an ideal opportunity to take advantage of a lazy stroll to the local pub, the Acorn Inn, which is also part of the hotel. 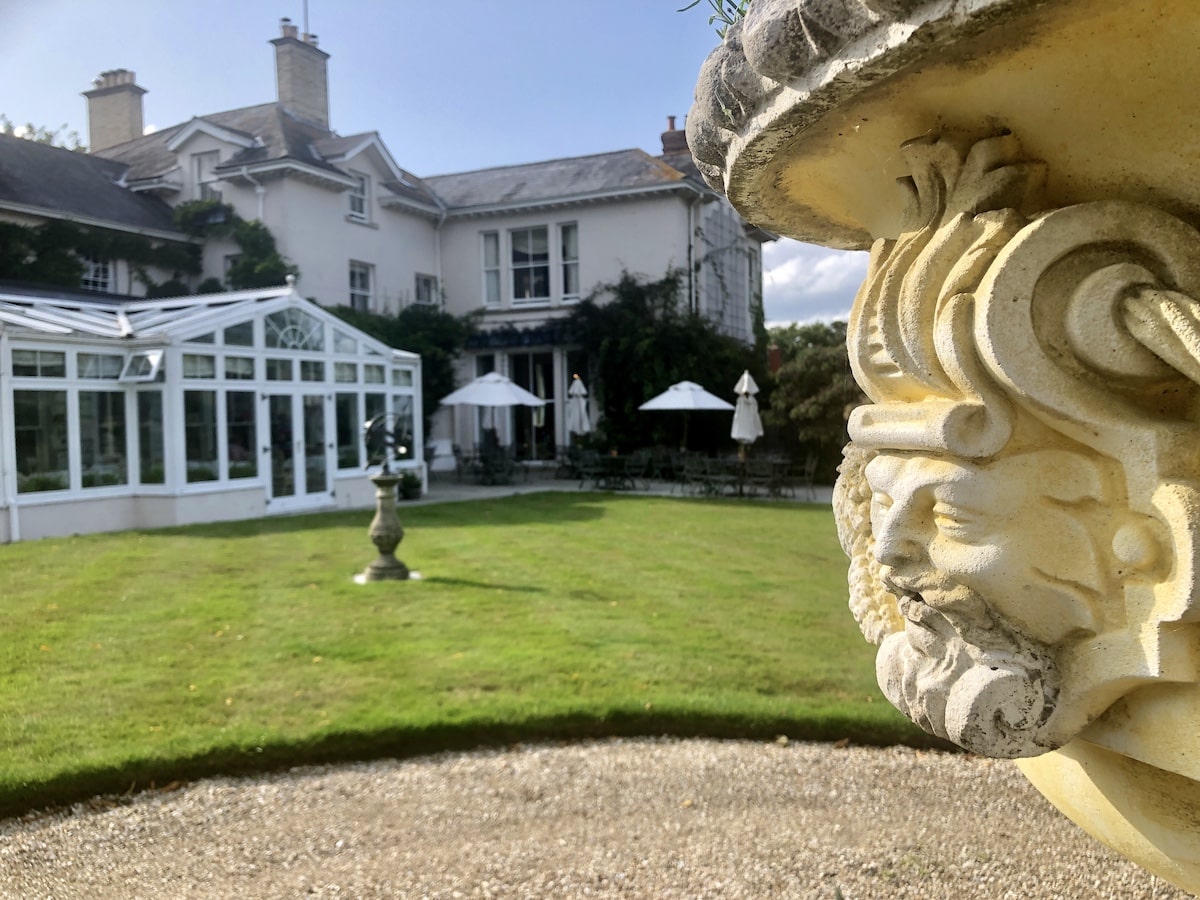 Head to a secluded beach

About 40 minutes south of the Evershot is Chesil Beach – an 18-mile long shingle beach and part of the Jurassic Coast. Designated a UNESCO World Heritage Site, the beach is a great spot for exploring with the kids and is also home to some interesting flora and fauna.

However, as we were sans kids, we ended up going on a stroll along the beach and then treating ourselves with some retro ice creams and lollies at the end of it – the perfect end to an hour's sea air!

The natural limestone arch of the Durdle Door is a Mecca to tourists – hence why I chose this as my main picture for this post – it's iconic!

Again part of the Jurassic Coast, as long as you are feeling fit and have appropriate footwear, the views on the arch are just stunning and, if you are feeling even more adventurous, you can head down to beach level and swim in the beautiful (albeit somewhat fresh) turquoise waters.

A slightly more lung-testing walk is the one to Lulworth Cove. It does get packed in the peak months, but is well worth a visit. You could do what some people do – go halfway on the walk and then sit on the hill to have a picnic, do a spot of people-watching and look down into the valley below – a beautiful sight. 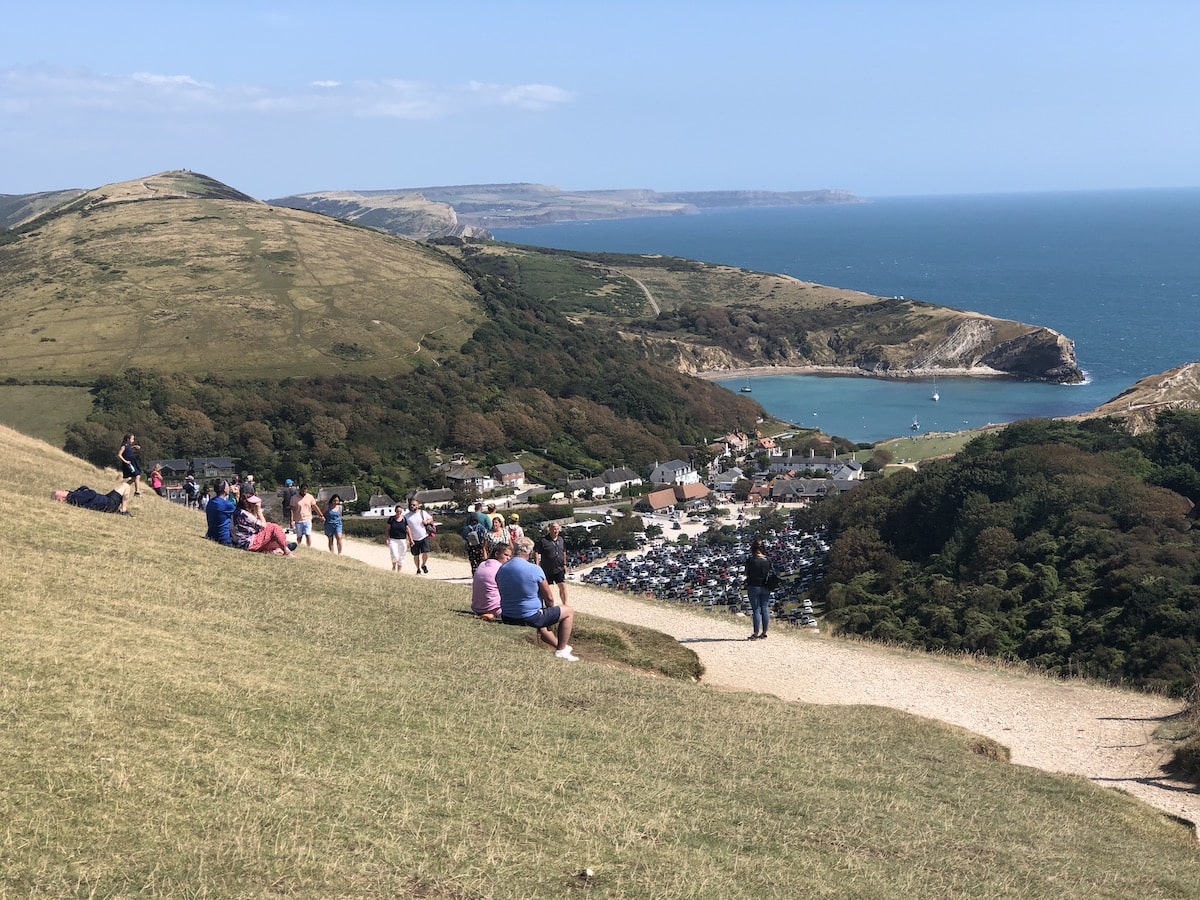 Sitting on the hill admiring Lulworth Cove in the distance

Another thing to do in Dorset on a whim is pop into Poole – it's another half an hour up the coast from Durdle Door.

The town has a harbour replete with luxury yachts and if you have your sea legs, you can jump on a harbour tour. During WWII, Poole was used as an embarkation point for Operation Overlord and a plaque commemorates this fact. 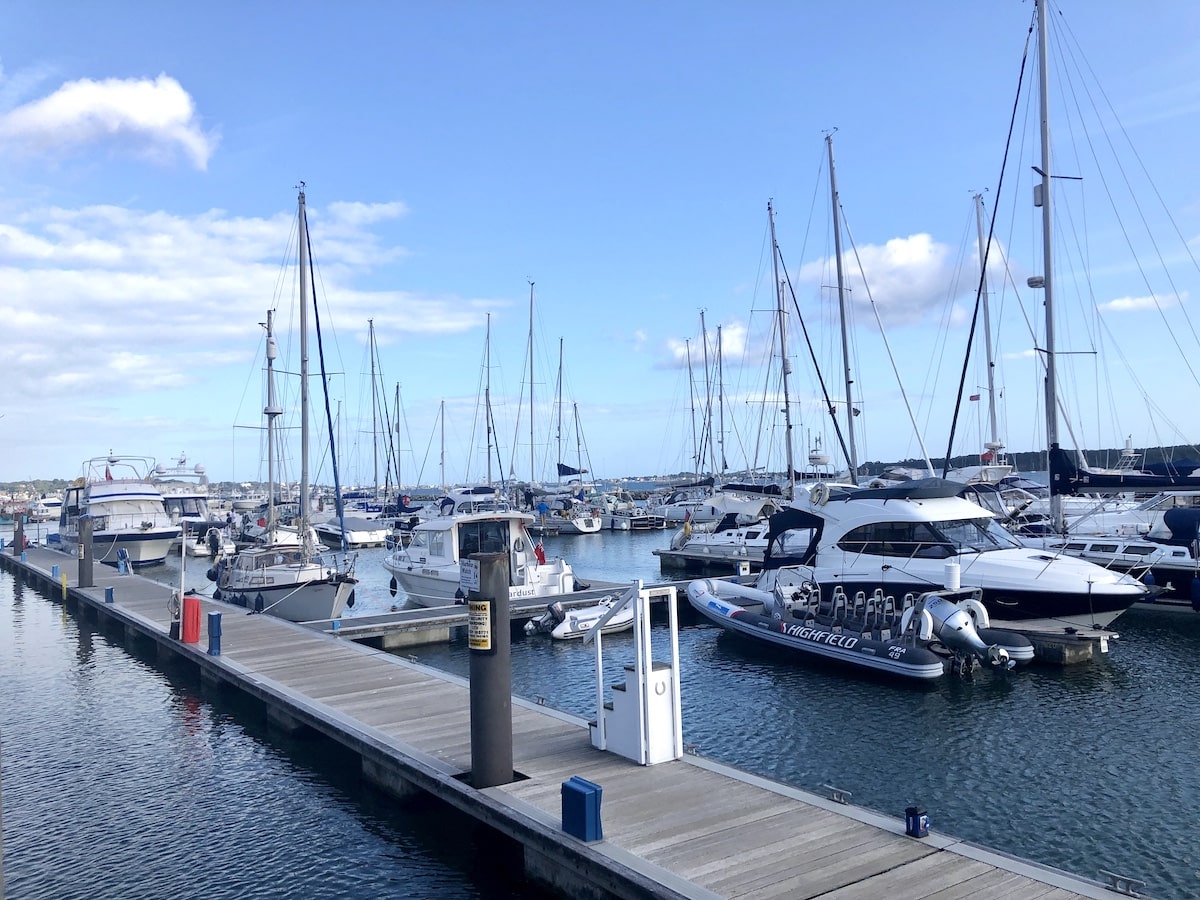 After our excesses at Durdle Door and Lulworth Cove, we found a beautiful little tea shop on the High Street – The Courtyard Tea Rooms – and after having filled our boots (and bellies), we happened to stumble across Scaplen House.

This historical building is a warren of different rooms, each presenting a vignette of times gone-by- we couldn’t help but be drawn to the toys and games and the beautiful walled garden. Definitely worth a visit. 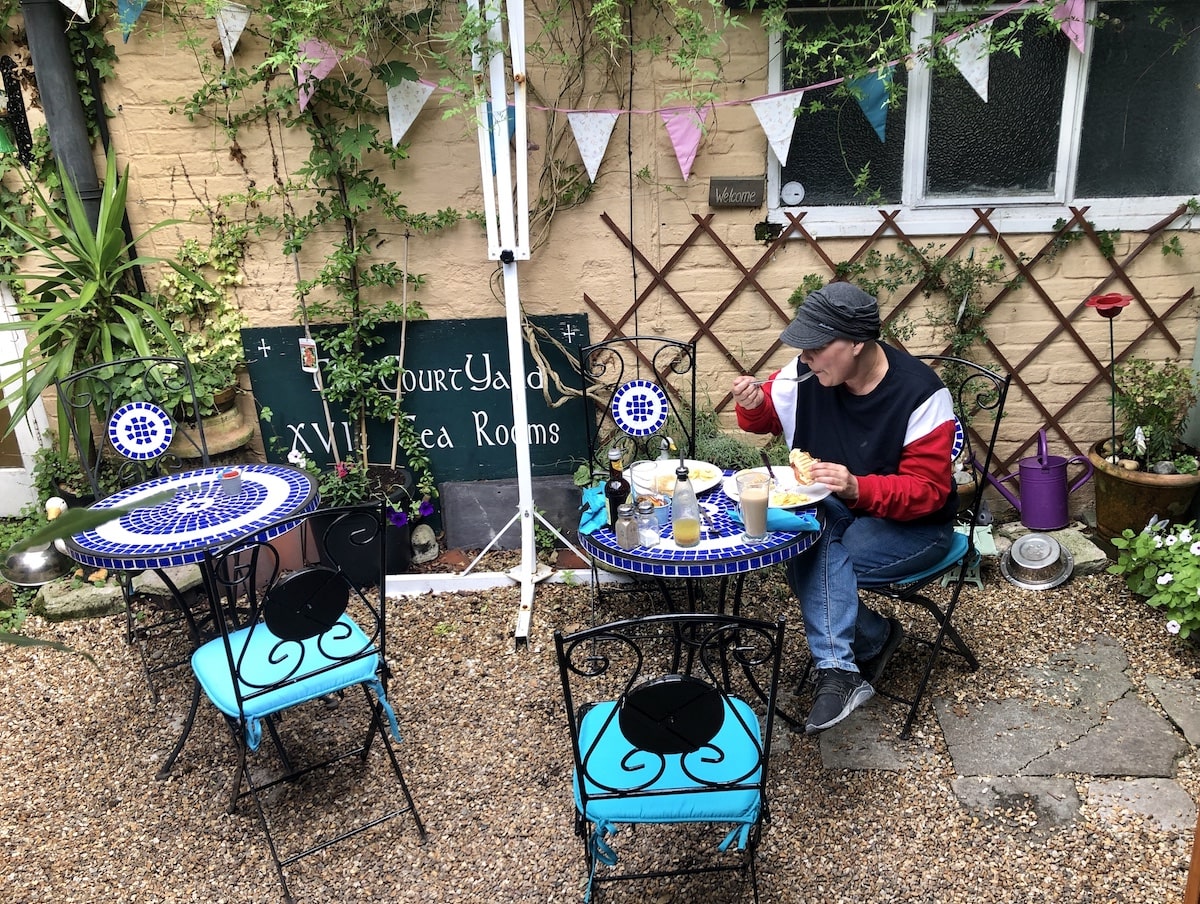 Check out the nightlife in Bournemouth

Leaving Poole by car, you realise quite quickly that it seamlessly morphs into Bournemouth. Bournemouth is a renowned party town, attracting five million visitors every year.

Packed to the gills with bars, clubs and restaurants, our marathon 25,000 + step day was capped off with a late night burger at 63 Million postcards. 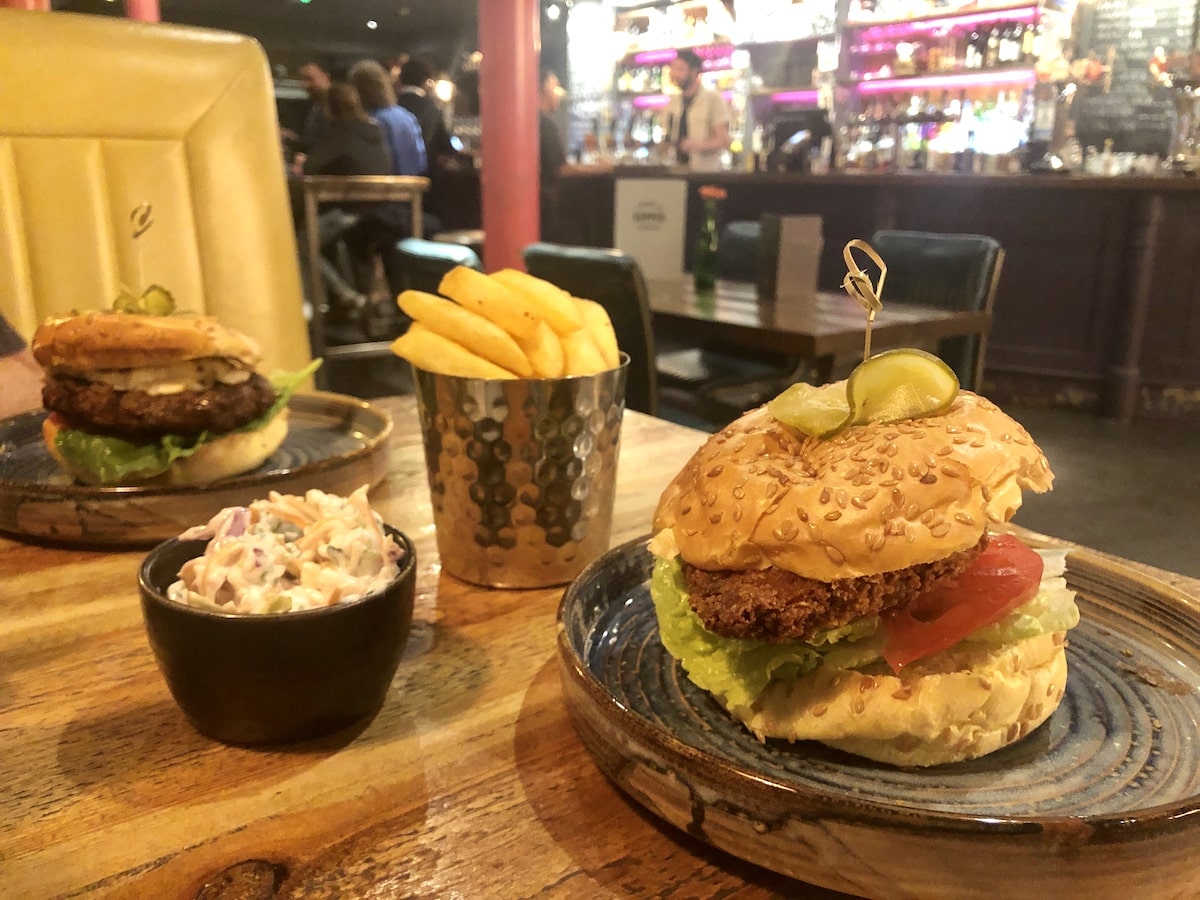 All that was left for us was an Uber back to the hotel, which arrived before we had even closed the app.

We spent just 48 hours in Dorset and managed to do all of the above – and more. But these were the highlights that I'd recommend if you're on a flying visit.

I'd love to return to Dorset one day – especially to the gorgeous Summer Lodge as I quote fancy a dip in their beautiful swimming pool and to take in the views of Durdle Door again – and who knows, maybe next time I'll end up going for a quick dip in that turquoise sea….

Have you ever been to Dorset? What's your favourite memory – or what would you like to do?

I live in Dorset having moved down from London 7 years ago. We love the area, Poole and Bournemouth is a great base from which to explore the beautiful Jurassic Coast and the Isle of Purbeck. In fact, I have a website about the area and my friend has recently written a book entitled ‘111 Places In Poole That You Shouldn’t Miss’. My brother got married at Lulworth Castle in November and it was amazing. Complete Dorset converts!

How lovely that you moved down there and you’re obviously really passionate about the place which is lovely to see Charlotte. I didn’t realise quite how stunning this part of the country is until I visited and I’d highly recommend a visit – I’m sure I’ll be back one day too!

We have not yet ventured to Dorset but was hoping to do so before year end. Thanks for this guide, we will include Poole into our itinerary too

Great if you can use some tips from the post – and I hope you have a great trip Anosa…wrap up warm!

This is so helpful Lauretta! I used to have family that lived in Poole, so we visited a fair amount – I’ve never been to Durdle Door so will add that to my list of places to visit xx

Oh you must Alex – you’ll love it there – very ‘instagrammable’ as well! xx

You packed in a lot! I haven’t been to this part of the country for years, definitely time to visit again.

It really should be on the bucket list – I couldn’t fault the place at all. You’ve just got to hope for nice weather when visiting don’t you?

Lulworth Cove looks like the most amazing place. I can’t believe I still haven’t visited. I was going to go this summer because I wanted to take a trip to Monkey World which isn’t too far away either.

It’s very picturesque Rachel – and feels like one of those places when you feel on top of the world when you’re admiring the views. I’m sure you’ll get to go one day. I’m hoping to return with the kids in tow next time x

It’s surprising how picturesque Britain is. I love all the recommendations and hats off to you for packing in a weeks worth in two days. The views look amazing.

Ah thanks Nayna – I hope the recommendations have provided some inspiration for those looking to venture to Dorset. Sometimes we just stumble upon some nice places don’t we? It doesn’t feel like we were rushing around while we were there but we did squeeze in a lot I guess in the two days x

I spent a couple of days down in Dorset a few years ago but didn’t really get the chance to explore. I definitely want to go back and if I do, I’ll definitely be visiting Durdle Door!

There’s more than plenty to do down there isn’t there Rebecca? I reckon even if you spent a couple of weeks down there, they’d still be plenty to do and see. Really pleased we took the time to go – and I’d wholeheartedly recommend to anyone – couples, families, groups etc

I’d love to explore more of Dorset, I only went to Bournemouth when I was living in Hampshire. I’m back in the Midlands now and regretting not getting down there more!

I’m sure they’ll be another opportunity Hayley! It’s one for the staycation bucket list anyway!

What a beautiful place to visit. We are over in Australia so unlikely we will ever get to venture over to the UK any time soon, but Dorset looks stunning

Thanks Tash – it’s a beautiful part of the UK – very picturesque and you just feel like you can lose yourself there for a few days. If you’re ever in the UK, keep it on your radar!

I think to chill with a view of Durdle Door and Lulworth Cove is awesome! The view is just spectacular.

It really was Cameron – definitely worth going to see. The nice weather helped too of course! 🙂