I’ve always loved a bit of upcycling – you know, doing things up so they look nicer and function for a better purpose.

But I usually stuck to the little things – a wooden box come pincushion here or a picture frame repurposed for a noticeboard there.

It wasn’t until this autumn that saw me take on my biggest project to date – a garden shack upcycle – from a bike shed into a garden bar.

But I can’t take the credit for all of it of course. It was largely the skilled hands of VIP that took this homemade bikeshed to another level.

And I have to admit, although I’m not a drinker, the new bar in the garden looks a million times better than the shack that was there before – it really is a garden shack upcycle to be proud of.

First things first, the kids had outgrown their ‘baby bikes’, so the bike shack was rendered pretty useless.

It had served its purpose for many years and I was super proud of the fact that I managed to find wooden crates around the back of my local Toby Carvery – and even happier when they said I could have them for free!

It took quite a few car journeys to get the 12 wooden crates back home (the boot space in my Kia Soul is pants!), but it was great to see them put to use in housing the kids’ bikes. 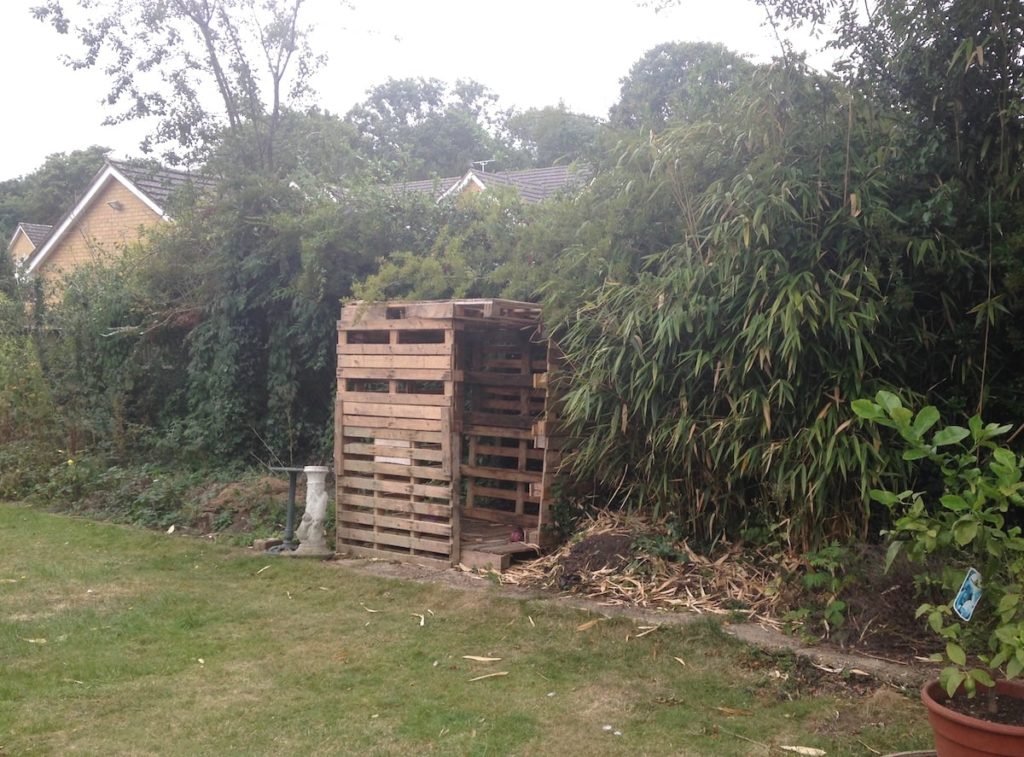 That was about 5 years ago. Now the shack was beginning to look a bit sorry for itself – the kids bikes had long gone – donated to charity or sold on eBay and rather than just knock the structure down, we thought it would be nice to upcycle it into something that was useful for the garden.

But what? And then VIP had an idea – a bar in the garden! When he suggested it I couldn't help but laugh – that's him all over, but I liked the social aspect of having a bar in the garden (even if I wasn't a huge drinker) – and it would look a million times better than an old bike shack that was rendered useless!

And so the decision was made.

First thing was designing the bar – and this is where I largely came in. I knew I wanted a roof as the British weather is so unpredictable – and I knew that I also wanted a wide serving shelf to put drinks on.

VIP cut windows in the side of the structure, leaving the struts up in each corner so that it had a roof.

Then with the extra pieces of wood that he had cut out, he used these to nail into the bottom of the bar; previously it had gaps all the way round, but we needed a bar that looked like a bar – minus the gaps around the bottom!

With the extra pieces of wood left over (and decking offcuts), we turned them to good use by making a counter shelf that ran all the way around the bar – to rest drinks on of course!

Next came the roof and we bought two panels of black bitumen corrugated roofing sheets – again from B&Q – which cost around £17 each. 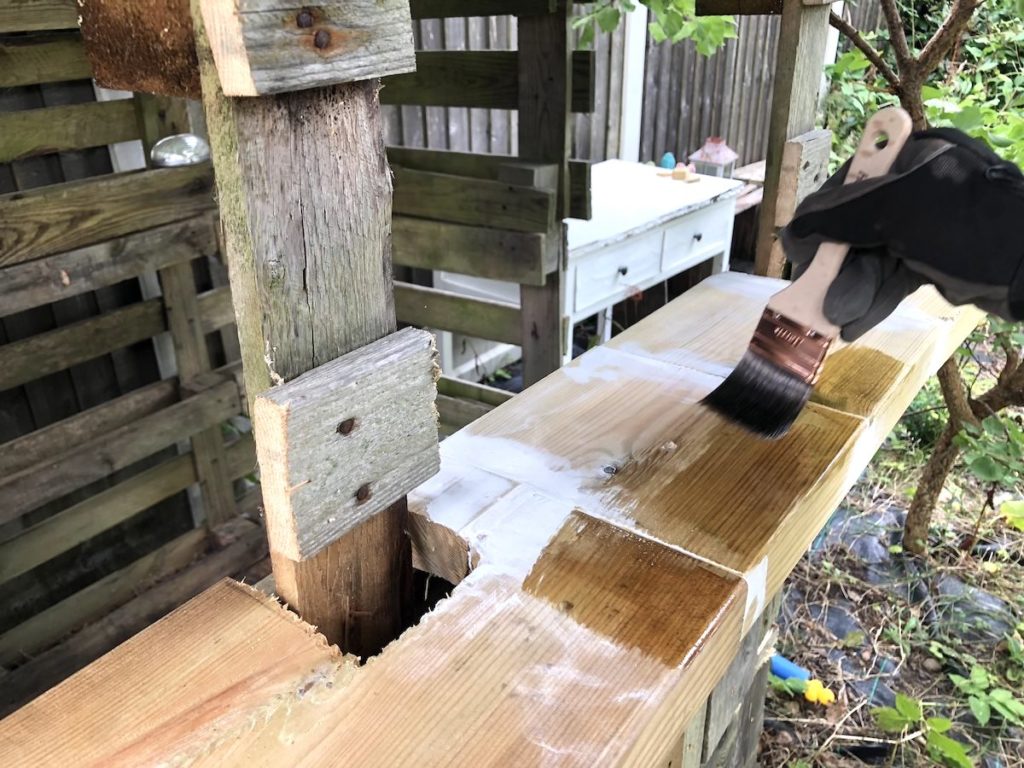 Last but not least was to give the new shed shack come garden bar a spruce up – after 4 winters with no real TLC, it certainly needed it.

We gave all the wood a good sanding down (an electric sander really helped here!), then brushed off the excess dust with a stiff brush.

I was considering painting the different slats different colours, but thought that it might look more like a beach hut than a garden bar if I did that, so I decided to preserve the wood instead by using an outdoor wood preserver (we used this one from B&Q which costs from £13 for 1 litre and did the job well!)

And of course, I used my trusty Harris Brushes, which have helped with a variety of projects in and around the home including updating some of the smaller details in my office. 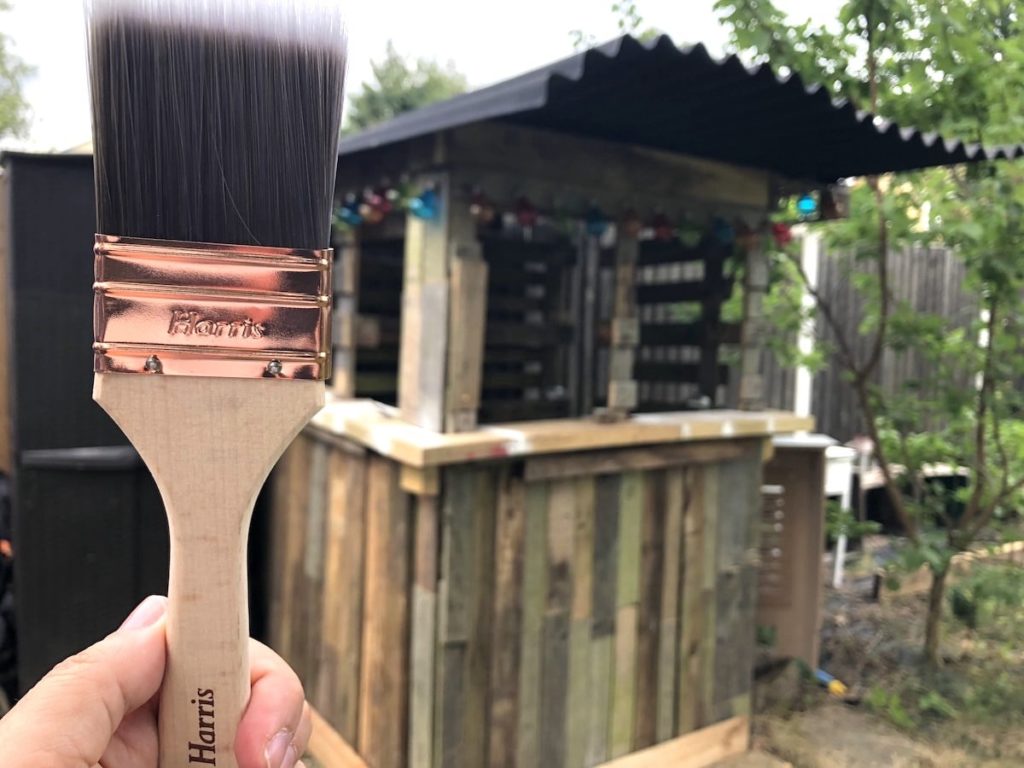 What I love about them is that they’re great quality so you know you’ll get a professional finish for whatever job you turn your hand to, with minimum bristle loss too.

And I think you’ll agree with me when I say that the garden bar project has turned out to be a big success.

Now all I need is for spring to hurry up so that I can entertain friends in the garden and make sure the bar is put to good use – cheers!

Super cute idea!! I love the colored lights around the top, I bet it looks amazingly festive and inviting when they are lit!

What an awesome idea!

Wow what a fab project and transformation well done

Wow what a fab project and transformation well done

Thanks very much Margaret, I appreciate that!

I love this! My shed is falling down, probably because whenever one of my dogs gets a phantom pregnancy she digs bigger and bigger dens underneath it. I could quite fancy a bar, once I’ve worked out where to put the contents of the current shack.

Ah, thanks Elizabeth! You could always get an incinerator and burn them – then pick up some free pallets to build a bar – maybe make sure the dogs stay away from it though! ha ha…

That is a really awesome project! I bet it will really come into it’s own in the summer, lets hope for another scorcher and lots of garden parties at your house
Zena’s Suitcase recently posted…I’M A GIRLY DOLL REVIEW (AD)

I’m definitely up for the great weather – and lots more entertaining for family and friends…we’re on the home stretch to spring now!

Kenneth Green – What a brilliant idea, just perfect for lazy summer evenings or Bar-B-Q’s with friends.

Thanks Kenneth – great to have inspired you! 🙂

This is such a clever upcycle idea. I seriously love it! I bet you can’t wait for the warmer weather now

Thanks Kelsey – and yes, I’m willing summer to arrive if i’m honest!

Wow, this is really fantastic! What a great idea. Bet it will be great in the summer.

Cheers Hayley – I think it will be getting a lot of use in the summer!

I love this,what a brilliant idea! I’d love my own bar in the garden!

It wasn’t too difficult to achieve – and if you can get hold of some free pallets – even better!

Well, Lauretta, I will be your first customer. I’m coming over for a drink. haha – love this idea. xx
Anna nuttall recently posted…Happy Christmas 2018

Ah, that’s lovely to hear Anna – come on over for a drink! You’re very welcome 🙂 x