The Top Four Rides at Phantasialand

So when it comes to theme parks we aim for the fastest, tallest, scariest rides possible.

Having had the opportunity to visit Phantasialand (we were on a weekend trip to Aachen in Germany) and knowing that we only had 3 hours there, we did our research before we went.

It's always good to be prepared and, as Einstein said, knowledge is power! In three hours we went on four rides because we knew exactly where to head to and how to get there.

Over the years we've found that the most productive way of navigating theme parks is to go to the furthest ride away from the entrance and work your way back to the front entrance. Most people stop at rides they come across as they walk, meaning that by the time they've reached the top of the park, the queues have built up.

However, if the park has got two entrances – one main one and one ‘at the back' as some of them do, it's always best to enter the park from the second entrance as you can start plotting rides nearest you. Sometimes these ‘secondary' entrances are linked to theme park hotels – again, it pays to do your research before you go.

Phantasialand has a back entrance adjoined to its hotel, so you're more likely to be dropped off at main entrance, so on walking in (and aim to get there nice and early!) here's where to go and what to do…

When you come in through the main entrance, grab a map and walk straight forward, heading for the Mystery Zone. Taron is number 400 on the map (in purple).

The ride was awesome – and I can't think of a better word to describe it! In fact, it's one of my favourite rides of all theme parks – of all time! Despite not having any loop the loops, It has more twists and turns than you can shake a stick at. Halfway through the ride – just when you think it's going fast enough, it accelerates even more. So you go super speed! The adrenaline rush is amazing – and, just for a second, I thought the ride had broken because of its super speed. As soon as I got off this ride I desperately wanted a second go. I was even willing to forfeit all other rides for a second go, that's how much I loved it. Turns out the family loved it too. When we first arrived, the ride was a 10 minute wait – and by the time we had got off it had jumped up to a 40-minute wait, so it's worth heading to first to get first dibs!

Top ride tip for Taron: Put your head back in the chair before the ride sets off – it accelerates from 0 to 70mph in a split second. Also, there is a single person queue so if there's a long waiting time, it might be a good idea to join this queue if you're in a rush. Sadly there's no fast pass.

As you're already in the Mystery zone it's worth visiting Mystery Castle, located directly behind Taron, for a ride (if there's a short queue).

The ride starts full of promise – there are four seating zones arranged in a square facing each other – and it starts promptly and really quickly by whisking you up high. Once at the top, all the lights go off and you free fall down in your seat in the pitch black.

It's a great experience – and all you can hear are screams from all around, plus it feels like you're falling for a long time.

The ride stays in the dark for its duration, but you can feel yourself rising and falling. But sadly, in the blink of an eye, it's all over.

If they repeated the first part of the ride a few times this would take this ride from being great to being epic. If there's a long wait for the ride, give it a miss, otherwise it's definitely worth a quick thrill.

Top ride tip for Mystery Castle: Be prepared that the ride doesn't climb slowly up – it accelerates upwards really quickly, so brace yourself beforehand.

From the Mystery Zone, head back towards the front of the park towards the Africa zone, which is where Black Mamba is located.

This was my second favourite ride – and this one allowed fast passes so if you have them – use them to get straight on. Be aware if you do this though, you're not allowed to get on the front row of the ride as there's a separate queue for that – one that's not available to fast pass holders. 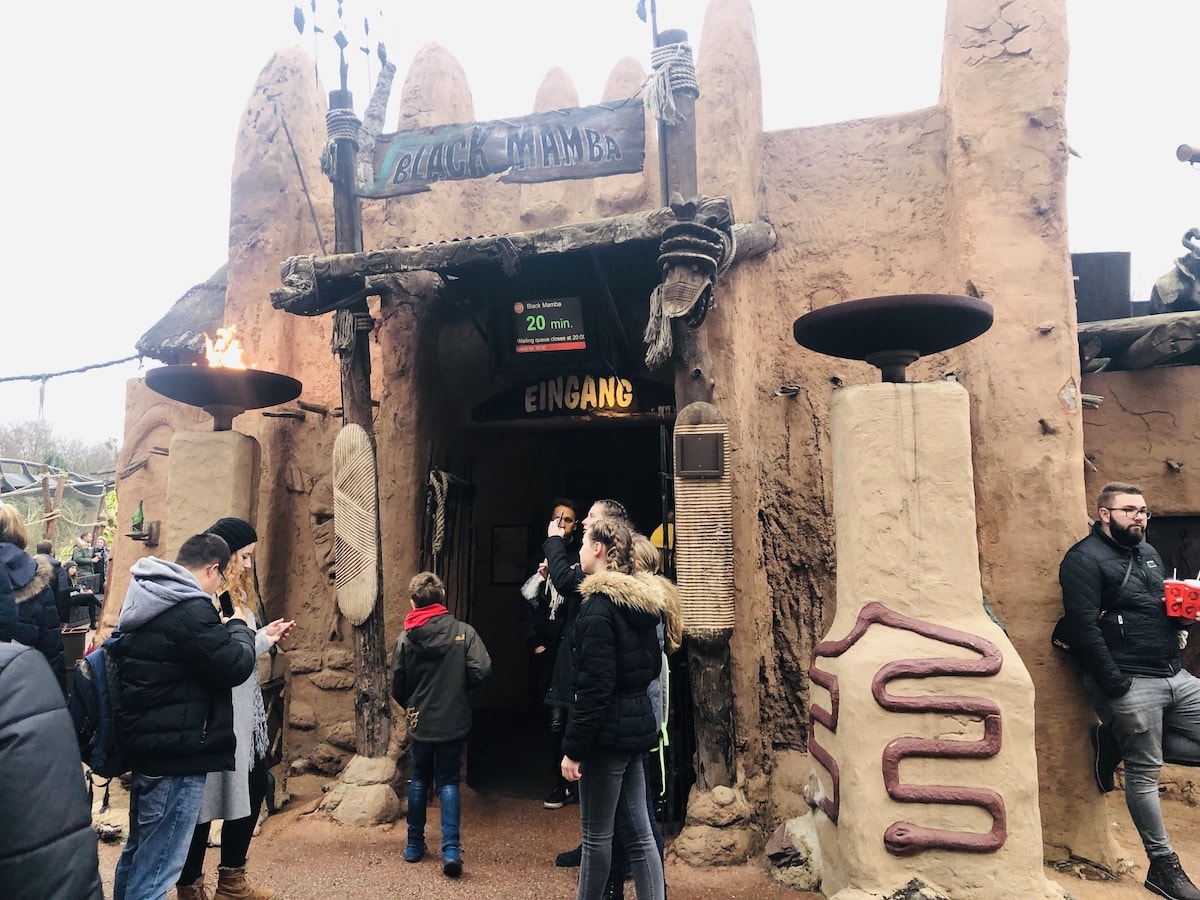 The ride did a loop the loop, was super fast and had loads of twists and turns. It reminded me of the Vampire ride at Chessington World of Adventures as your legs are suspended. The kids loved it too and we'd have gone on this a few times if we'd had the time.

Top ride tip for Black Mamba: If you can get a seat with a view do it! We were right on the back row and all I could see was the seat in front of me. It was still a very thrilling ride and worth a go.

Winja Fear (and sister ride Winja Force) are located in Wuze Town, which is all indoors, so if the weather's not great, it's worth heading to.

Don't be fooled by this childish looking roller coaster (and its alliteratively named counterpart); after being terrorised by the more obvious thrill rides like Taron and Black Mamba, the cutesy carts looked no threat at all.

However, no sooner are you on the ride when the cart is lifted up to another level and you are shot forward with some venom and met with super tight twists and turns and (sick bag alert) pirouettes as you approach the end of the ride.

Perhaps if we'd not just eaten lunch prior to the ride I would have enjoyed it more, but it's definitely worth a go.

Top ride tip for Winja Fear & Force: Don't eat just before you go on this ride and be prepared for the spins.

Phantasialand is a great theme park in terms of its aesthetic appeal. They've also got a great choice of eateries, particularly in the Berlin zone, plus some nice gift shops.

Things I particularly liked about Phantasialand:

The detailing that goes into each of the zones is amazing. The Germans know how to do theme parks!

I also liked the impromptu displays and entertainment – it was a nice surprise to come across various things happening in between the rides like dancers and music.

Things they could do better at the theme park:

Two words: sign posts. They need more maps in the park and more sign posts that indicate the way to the rides. There were hardly any, which means if you're trying to find your bearings it makes it really difficult.

We also got caught out by a couple of the rides as the signs for the Quick Pass were so tiny we missed them. Typically, you enter the Quick Pass queue by going through the exit of the ride. It took us a while to figure this out though.

There's no WiFi in the park which is a little disappointing – or if there is, it didn't pick it up on my iPhone.

There is an app that you can download of the park first though – I didn't try it so I don't know how good it is, but if it allows you to navigate your way around it's probably worth getting due to the lack of maps in the park.

Overall, we had great fun at the park, made sweeter by the fact that it was raining up until we arrived, stopped raining as we exited the coach, and then absolutely tipped down the second we got back on the coach to return home. I mean, when does that ever happen?

I wish the park has more thrilling rides, but then again, if you're only there for a few hours like us (and it's just the adrenaline rides you're seeking), then it's probably not a bad thing as it means you get to try them all out.

What sort of theme park rides do you like? And what's the best theme park or ride you've ever been on?

A Pin For Your Travel Inspiration Rollercoasters are a massive no for me. Despite me trying them multiple times, I think I’ve drawn a line under them now – although I do love the majority of the rides at places like Disney. Thank you SO much for the great tips – I do have 3 thrill-seekers in my family and anything that can help to get them on more rides and cut-down waiting times is super helpful. You were so fortunate with the weather, weren’t you!

And there’s me thinking they’d be right up your street Alex ha ha! Great that the tips might have helped a few members of your household though… 🙂 xx

I’m a total wimp when it comes to rides! I’ll try the semi-fast ones, but only if I don’t have to queue for ages otherwise I get super nervous lol. This park looks great and my hubby and kids would love it!

Ah thanks Sam – that’s the trouble with most of the big rides….you have to wait ages to get on them. What it must be like to be famous and have places close down for you eh?! ha ha..

I agree with your tip on starting at the back – that’s often worked for us. Phantasialand sounds amazing – we’ve never ‘done’ a German theme park, and I know my adrenalin junkie son would love it there.

Thanks Nell – the Germans really know how to put the detail into their theme parks – they’re very impressive. I hope you and your son get to go to one soon!

Looks great!! I do love a fast pass, but when the park don’t have them is a bummer. Did you had a place to stay to visit this park? xx

Thanks Alejandra – no, we were only on a day visit there and then mid-afternoon we left to come back home on the shuttle. But in the 5 hours we were there we managed to get on the rides, shop around, have lunch and stop for a waffle!

4 rides in 3 hours is awesome! I’m not a thrill-seeker at all, so the big rides leave me cold! Mich x
michelle twin mum recently posted…Put Your Home in Order – Useful Tips

Ah thanks Mich – I can appreciate why you wouldn’t like the big ones. To be honest, anything too spinny can make me feel disorientated and dizzy – not a pleasant feeling, so I’ll avoid anything like that, but if it kind of goes in a straight line and has lots of drops and surprises on the ride, then I’m all in! ha ha

Ahhh Lauretta these sound fantastic! The Black Mamba sounds like my fave. I love rides with speed, and even heights. I cannot do rides that spin. What is it we love about being scared!

Ah thanks Kerry – it’s just the adrenaline rush isn’t it? It makes you feel really alive! I love it. You would love Black Mamba, but Taron was my fave – that unexpected rush as it went super sonic speed – what I wouldn’t give to see the kids faces when that happened! ha ha..