How to make a garden pub area

Way back when, VIP had the idea of creating a den for the kids; made out of pallets stacked on top of each other and lashed and screwed together, it languished for years, unused, save for acquiring old kids’ bikes and various other bits of garden detritus.

A few years ago, armed with a jigsaw, an impact driver and a dream he transformed this festering pile of timber into something resembling a Tiki bar (see link) which soon, however, began collecting its own detritus; this time flower pots and seat cushions as well as the odd bag of rabbit hay.

The problem was the location- far enough away from the house to make it a bit of a mission to visit and perfectly placed to accumulate the various off cuts of other garden projects. The area had also become the landing ground for the delivery pallets that my magazine comes on. Stacked haphazardly amid bird doings-encrusted paving slabs, VIP’s bar area was now more nightmare than dream.

The garden pub: reinvented due to lockdown!

The Easter break and COVID 19 enforced lockdown combined to mean that the fate of the area might now take another turn. An altogether more photogenic one. One bright but windy day saw him shifting the pallets around, seemingly aimlessly.

As it transpires he was preparing the ground near the bar. Uneven from having been at various points in its history a flower bed and a base for a greenhouse, any development of the area would need a little TLC. Fished from behind the summer house, a few off cuts of weed suppressing membrane covered the area and some abandoned slithers of paving slabs and deck boards, judiciously placed, made the area a good deal more level.

Four pallets arranged ‘landscape’ formed the skeleton of the decking that was to come. He had a plan and the two or three remaining pallets that had been sitting in the garden were now noisily harvested for their boards, much to the disappointment of the neighbours. 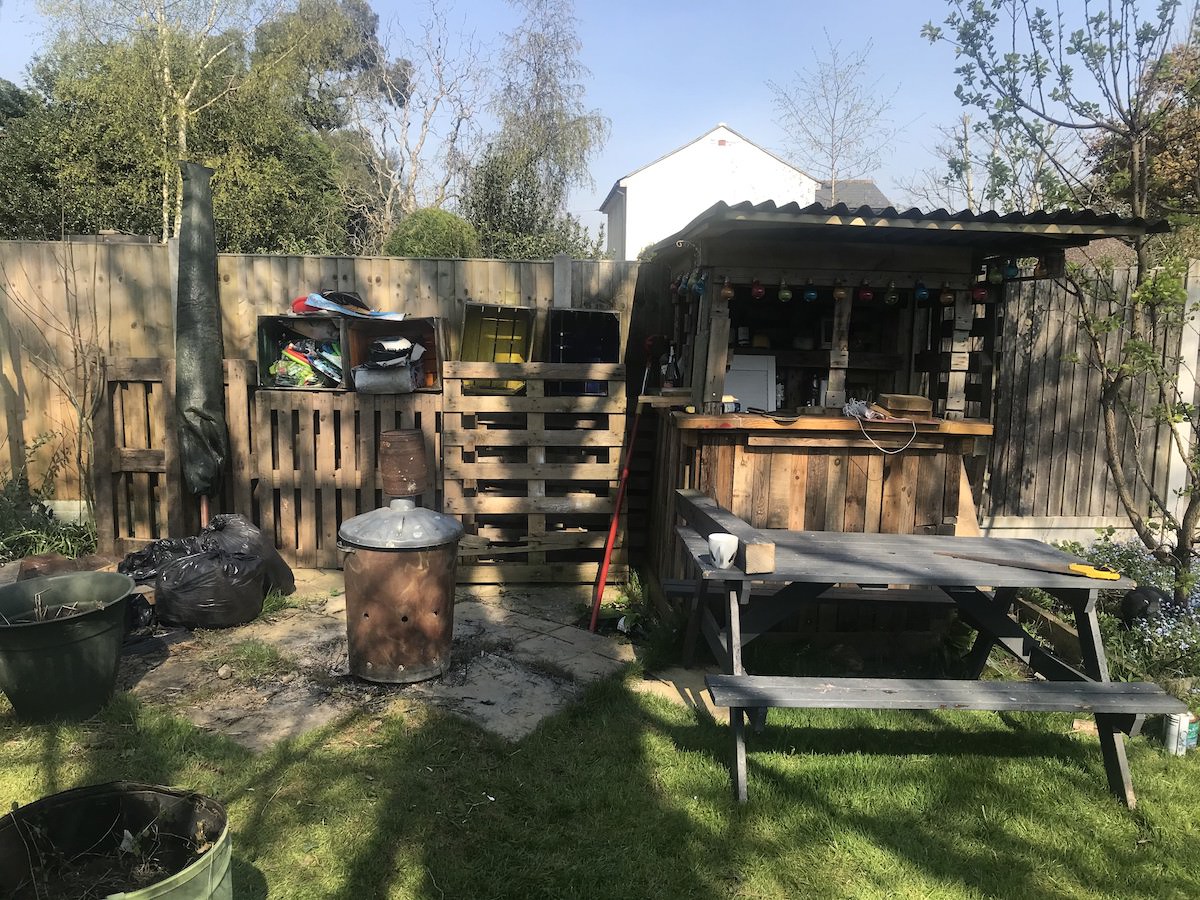 The area before the garden pub area got built

The rest of the plan

Once more armed with a jigsaw and impact driver, each of the boards was mounted on the frame to create the deck itself. Some deck boards patched up the gaping holes at the sides. It looked….vaguely presentable. That is except for the fact that the deck was an island in a sea of overgrown grass and clods of earth. As the weather warmed up, VIP proceeded to hack and chop at the earth around the deck and barrow after barrow of earth was ferried to a far-flung corner of the garden so that the site around the deck was also being levelled.

A garden games spray was used to delineate the outline of what would become the ‘pub garden’; a teardrop-shaped swoop that continued the line of a raised bed that led up to the summer house. More scrounging meant that next door’s soon to be abandoned 4-inch fence posts were chopped into 36-inch lengths and sunk into the ground at one metre intervals around the site – and yes, we have nice neighbours.

These were concreted into the ground and would soon be followed by an eBay order of 10m of 20mm rope that would loop in between the posts. The kids helped dig out the outline of a curved path that ran from the existing path to the new area. It was starting to take shape. Understandably, online orders were taking a little longer than usual, but soon the rope was joined by a delivery of 10m of weed suppressing membrane, a dumpy bag of 20mm Cotswold buff stone and another dumpy bag of sharp sand.

Using a makeshift tamper formed by attaching a block of wood to a sledgehammer, the area was made flat and the earth compacted. Now it was time to fight high winds as the membrane flapped around before 40mm of sharp sand was deposited on the area. 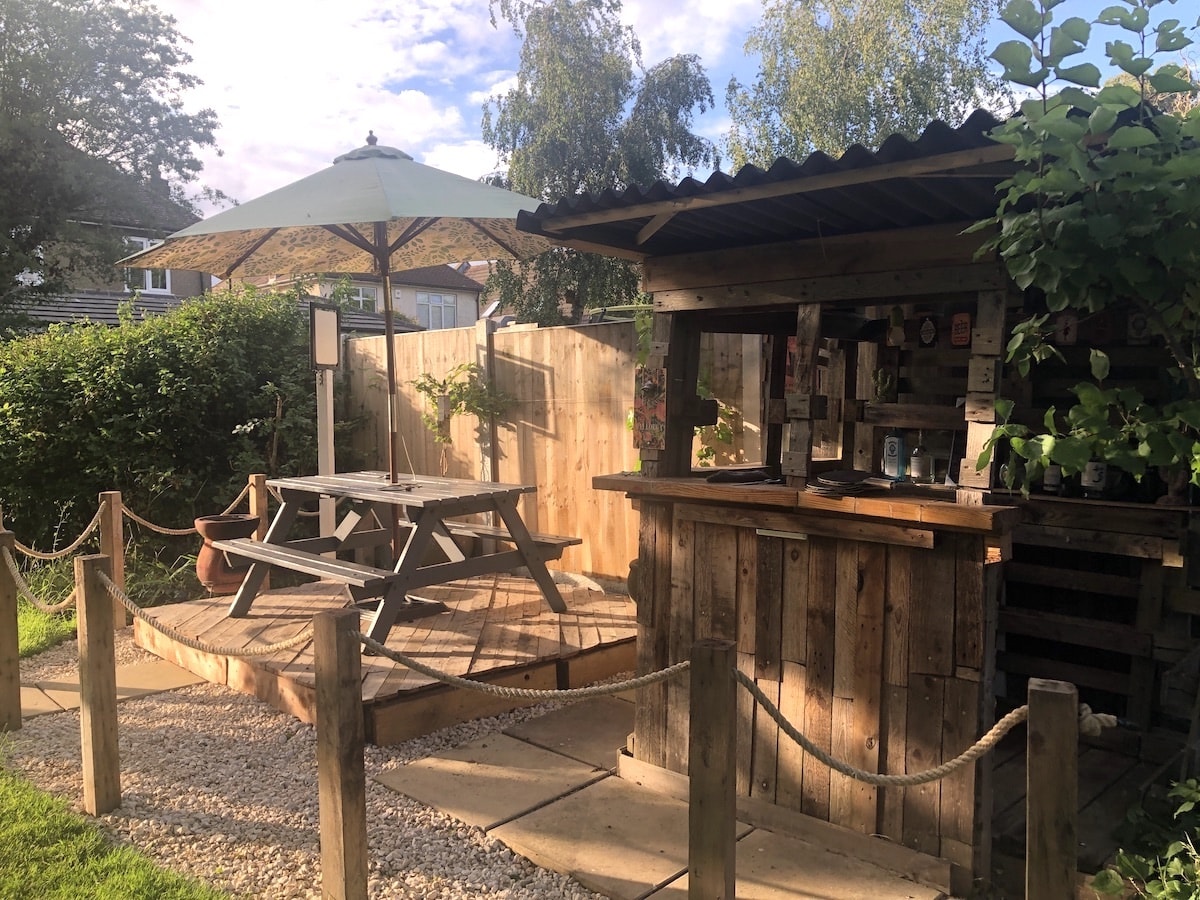 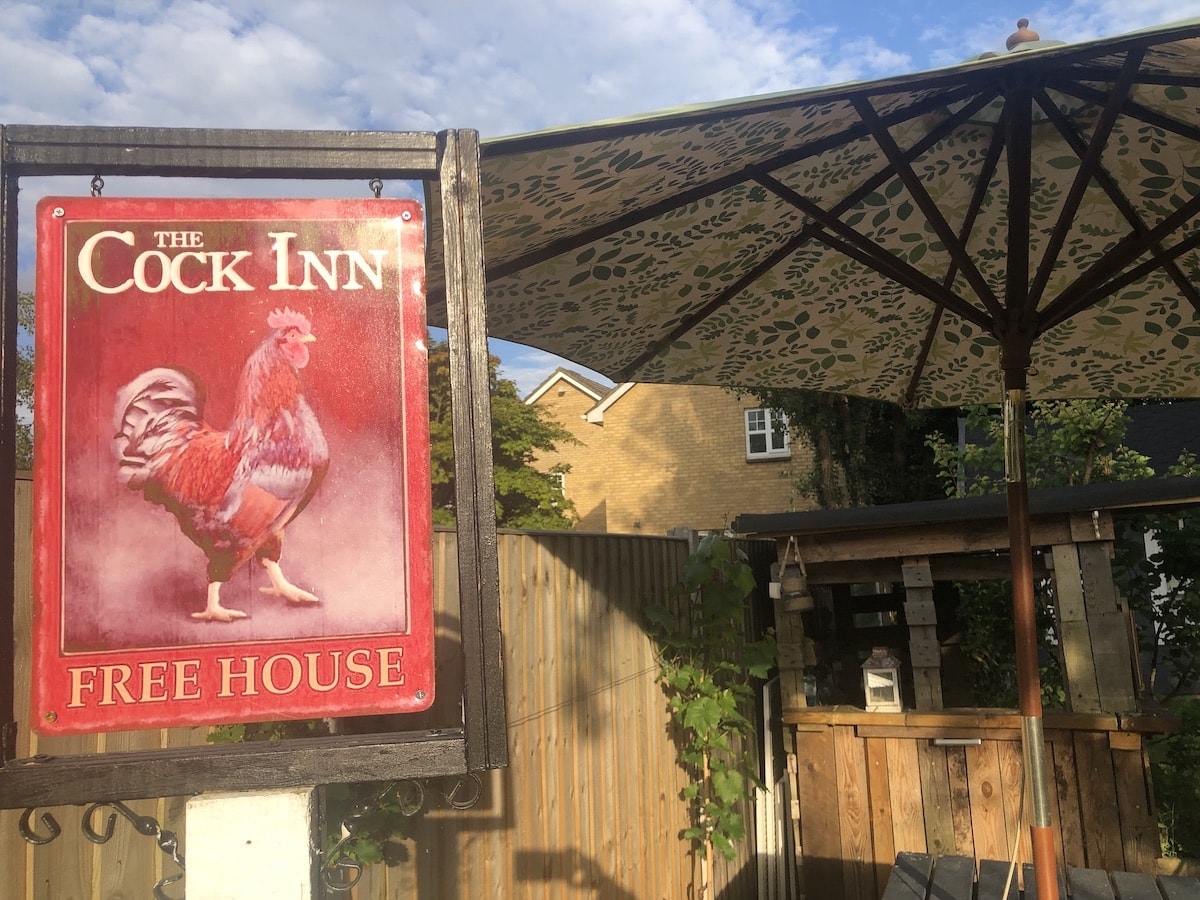 And then it was time to dust off the doings encrusted paving slabs. They would form the entrance path and the perimeter of the bar. A loan of an angle grinder meant that the stones were cut to size and then rubber malletted in place with a dry mortar.

The next step was to drop the stones in place and to rake them out flat. VIP and I moved the pub bench so that it now sat on the deck and he threaded the ropes through the pre-drilled holes in the posts.

The area was pretty much a finished one. Finishing touches would include the addition of a couple of grape vines and 10mm decking lights that would provide accent lighting for the area. Oh, and we had to give the pub a name of course. And no, I didn’t choose it, VIP did under the pretence that I refer to him as said name. Just for the record, I don’t. But it’s something close.

I’m proud of VIP for having the vision for his garden pub area AND following through in turning it into a reality. Yes, the garden pub hasn’t had many visitors due to lockdown, but hopefully it will come into its own over the summer. Here’s hoping!

Pin For Your Garden Projects 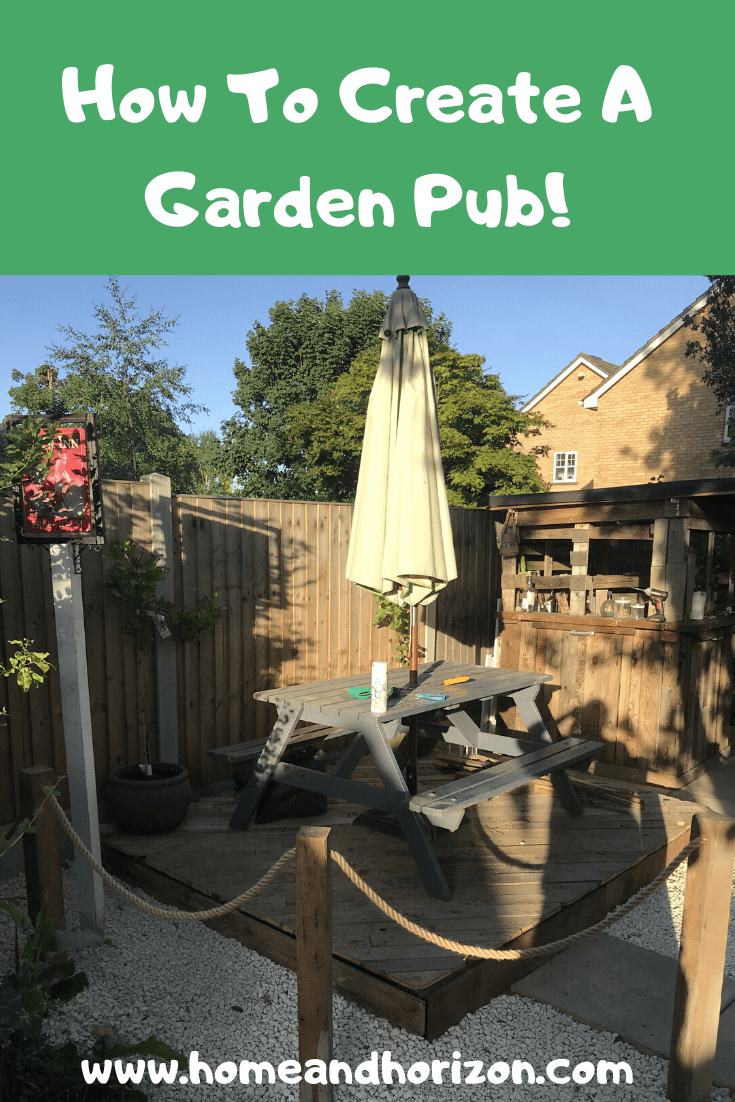 This looks brilliant. I hope you have many happy memories in your new outdoor space!!

This is brilliant, you’ll have so much fun using that area, and I’m loving your new header too, very clever. Mich x
michelle twin mum recently posted…Enjoying the Parkland at National Trust Sheffield Park during Lockdown

This is amazing Lauretta! WOW. Can imagine just how much fun you’re going to have this summer in your lovely pub garden.

Thanks Kirsty – it’s nice to have a couple of seating options in the garden. God, I sound like an old woman saying that! ha ha..

What a wonderful place in the garden and perfect for this lovely weather!
Nikki – Notes of Life recently posted…Family History: Accidental Death

It is ideal when the sun comes out – thanks Nikki. And the best bit is that that area of the garden catches the last of the sun’s rays.

Oh my god Lauretta I LOVE it! Do I get to have my own glass behind the bar and everything hahaha! What a fabulous job VIP has done. It looks brilliant. Not sure I would stray to far away from that particular public house…..

Well, you’ll just have to come over and see for yourself! It’s an open invite – come whenever! And bring Nik too! x