I was both excited and apprehensive about going to the BritMums' #BML17 event, which was held at the very impressive County Hall on London’s South Bank at the end of September.

You see, this was my first time at the event and of the handful of bloggers that I knew to speak with, most of them were not going to be there. So I was on my own – and about to be chucked in the deep end.

Well, on my tube journey on the way there I saw Alison from Not Another Mummy Blog (who I recognised from her YouTube videos). As we alighted at the station, I caught up with her to ask if she was who I thought she was (I didn’t want a random stranger thinking I was a complete weirdo!), and fortunately she was the real deal.

I hope she didn’t think I had been stalking her when I told her she must have made the exact same journey as I had as we lived in the same town. She was probably wondering how I knew where she lived, but it does have her location on her Twitter bio and you tend to remember people if they live in the same area don’t you?

Anyway, Alison and I walked and talked on the way to the event (which was relatively easy to find) and it was nice to have some company on the way there. It sounds silly but I somehow felt braver for having some company, plus Alison knew where she was going which helped!

Once inside we walked down a long corridor into what turned out to be a huge room (with separate rooms branching off, which I later discovered were the session rooms).

I turned to talk to Alison but she had disappeared. I fleetingly wondered if I had remembered to put on deodorant that morning, but then I told myself to stop being paranoid – and she had probably just spotted a friend.

I felt a bit self-conscious standing there on my tod, but then I spotted a table where some smiley people were handing out name badges, so I gravitated towards that to collect my badge. Then I spotted another table with room map sheets and details of the session timetable, which I nabbed.

As I turned to face the main room, loads of people were stood chatting merrily away to one another. Wow – where do I start? I wondered. As it was early morning, I decided I needed a big injection of caffeine to get me going, so I followed the coffee smell. 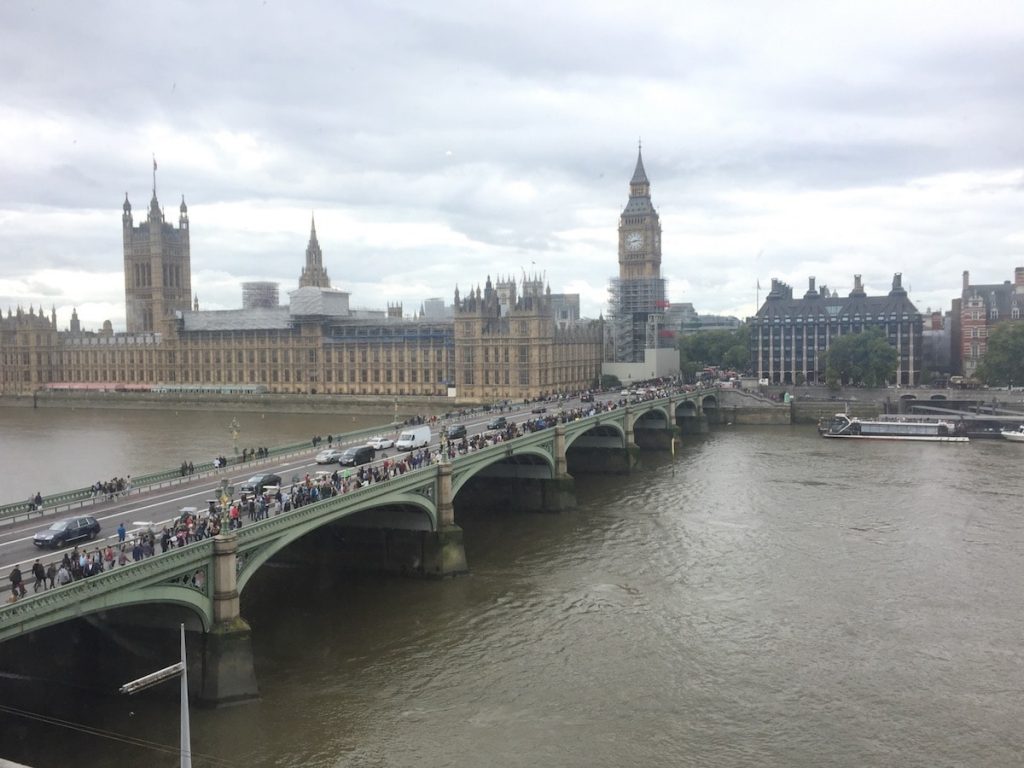 The wonderful view from the main room

Now the coffee machine is actually a great place to spark up conversation with people – either you find yourself looking for something with others (the milk) or, in my case, helping point out which pot was the hot water and which was the coffee…

And once I had spoken to my first, second and third fellow blogger, I couldn’t stop nattering away! And suddenly, I had regained my confidence and didn’t need hand-holding – turns out most of the bloggers were first-timers like me and they all felt a bit apprehensive too.

Okay, there were one or two who were pros at the game, but the majority were relieved to find like-minded bloggers keen to discuss topics that were important to us. And it felt good to chat about things that would ordinarily have my family rolling their eyes.

After a while stood chatting, I spotted Aby from You Baby Me Mummy. I think most bloggers have an idea of who Aby is – she helps bloggers meet their blogging goals, with plenty of tips and tricks – and comes across as a very nice person indeed.

Although we had ‘made friends’ over social media – and I had even taken a couple of Aby’s courses (and liked what I learnt!), I was a bit in awe of her. She has achieved so much in the time she has been blogging and I really wanted to meet her. After what seemed like half an hour (but was probably a few minutes), I finally plucked up the courage to go over and say hello.

It’s funny how you imagine people to be isn’t it? Aby was much taller than I expected (mind you, at 5’1” everyone is tall to me!) but she’s exactly how you see her ‘on screen’ – chatty and friendly and just my cup of tea. Oh, she loves her tea too – I know that much!

We talked briefly about the session she was running (which was fab – I’ll be publishing those tips soon!) and her move to France, and then I thought I had better leave her in peace as there were a lot of people standing around with her (including Alison – so that’s where she had got to!), but I still didn't pluck up the courage to ask Aby for a selfie – maybe next time.

Soon it was time to decide on which sessions we were all going to – and the crowd started to disperse. The bloggers I were with at that time were all heading to different sessions, but I managed to arrange with them to swap notes following the sessions.

This was definitely a godsend. For example, I was torn between the SEO side of things and going to the Deep Dive YouTube session, but with new-found blogging buddies doing the SEO and me doing the YouTube, we could swap tips afterwards – a win-win!

Leah from Roots & Toots kindly took some notes for me

If I were to suggest any improvements to the event it would be to have one session at a time so bloggers can attend all of them; easier said than done of course, but I would have liked to have gone to most of the sessions rather than have to choose between them.

I suppose the only way around this is to run the event for longer – two days perhaps – to give everyone the chance to see all of the sessions. Nonetheless, the event was very well organised and structured, but a shorter lunch break would have meant another session (maybe a repeat session?) could have been squeezed in.

So as I mentioned I managed to meet and chat with loads of different bloggers and vloggers at BritMums 17 – and this for me, was definitely one of the highlights.

In particular, I’d like to give a big ‘shout out’ to these lovely guys… 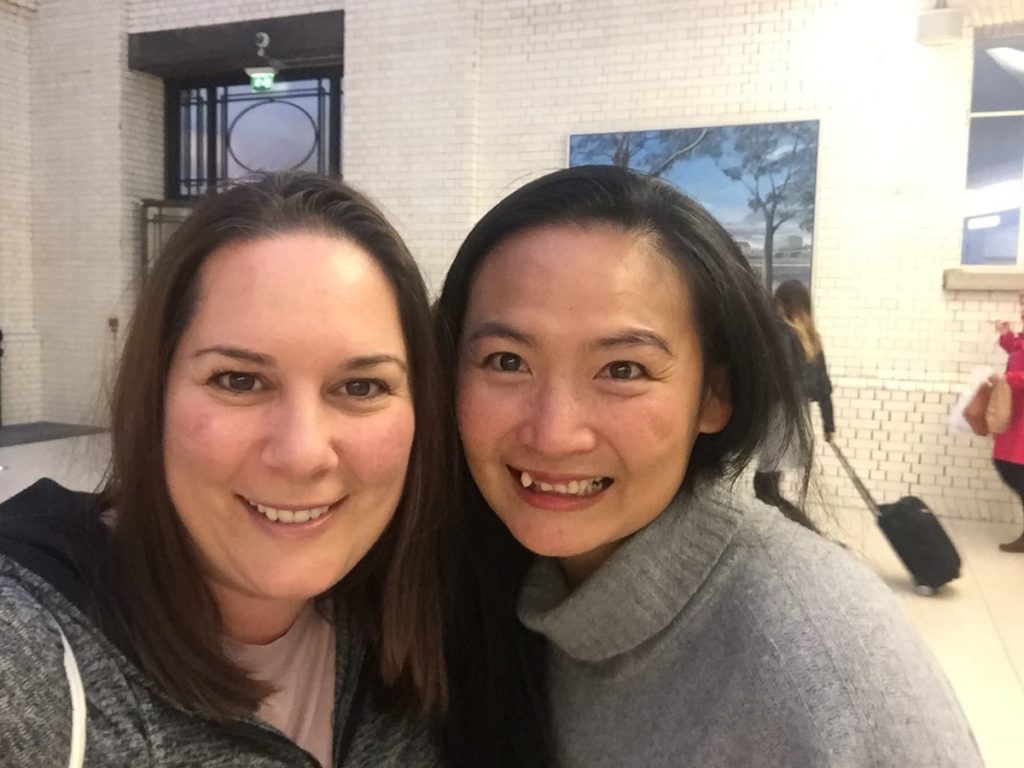 So, the questions that remain are…did I enjoy it? Did I find it useful? and would I do it all over again? And the answers are yes, yes and YES.

The people I met were all very friendly and happy to chat away and swap stories (and session notes); the sessions themselves were inspiring and full of information (some better than others of course); there was plenty of buffet food – and it tasted great; and finally…I’d definitely be up for going again.

There would be a few things I’d tweak about the sessions – namely the session clashes as it was soooooo hard to choose which ones to attend when I wanted to hear them all!

And I’d maybe run a small speed networking session for bloggers to meet and exchange cards with other bloggers over lunch (speak to me BritMums as I’m a pro at organising these…I was once an events facilitator for speed networking events!).

In the space of a day, I had laughed a dozen times, cried once (at the Keynote session listening to heartwarming stories from other bloggers) and I felt an enormous sense of belonging once I got chatting to like-minded bloggers.

These were my people; they too shared the same worries and dilemmas along with an abundance of enthusiasm and excitement at the prospect of learning new things.

We were being inspired together and it really felt good to feel part of this world. I just hope I'm in it for the long run as it really feels like I’ve found my purpose.

A Pin For Your Blogging Board… 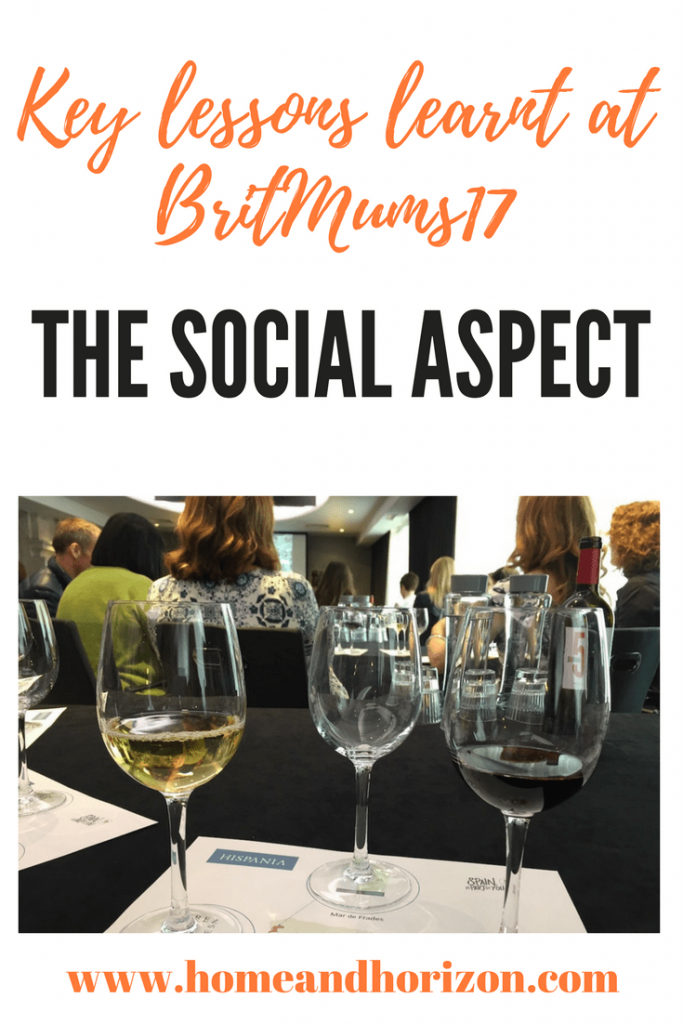 It was lovely to see you again Lauretta. We had a laugh (& tears) didn’t we. Thanks for the shout out. 🙂 xx

We most certainly did Su! Was lovely to see you X

Haha! Thanks for the lavatory shout out – I still laugh when I picture the surprise on your face… betcha you thought I was kidding when I said I recognised you!!! 😉 I still need to do my round-up post, so I can reciprocate your fab notes. xx

I did think you were kidding when you said you recognised me – but I was so chuffed that you did! Look forward to reading your round-up post. Am planning to do another one on the business side of things – it’s finding the time isn’t it?!

I would love to go a conference one day. I have made a couple of friends through blogging but have never seen any.

Thanks Victoria – it’s a bit surreal when you end up meeting people you chat with online – surreal but nice!

Sounds like a great event, so glad you met so many lovely people. I’m sure I would feel really anxious at something like this – I’ve lost so much confidence since not working in the real world. I was holding my breath as you were describing being left alone and looking around wondering where to go next! I’m sure lots of people are in the same boat though.

Ah thanks Cal – I think if you’re someone who is prone to feelings of anxiety (and who isn’t sometimes?), then I’d definitely say to arrange to meet someone before the event. But yes – you are right….most of us probably felt apprehensive about going. Just glad it turned out to be a great event – try and come next year?

Ah glad you had a good time, I’ve yet to make it to a blogging conference but will change that soon I hope!

I think once you go to one, you’ll then want to go to them all!

I love the idea of swapping notes as it’s a shame there were schedule clashes. Looks like a lovely event to meet new people x

Sounds like you had a great time. I would have liked to have gone but I have terrible anxiety about these kind of events!

This looks like a great day out and a fun social event for mum bloggers. Glad you got to meet so many new people

Thanks SarahJane – I’ll hopefully be posting up another link about the conference with all the main topics that I learnt about!

So glad you had a good day, it was ace to meet you and glad I came across as helpful. Mich x
Michelle Twin Mum recently posted…Taking my Sight for Granted on World Sight Day #WSD2017

Thanks Michelle – definitely very helpful and was lovely to meet you and have a brief chat before Aby’s session. x

Thank you for the shout out – it was so good to meet you! Kaz x

You too Kaz! And I forgot to say – what great names you’ve chosen for your new household additions! 😉

It was definately all about the social for me.
Working from home can become mind numbing so i do apologise if your were chatted at too much lol
Clare nicholas recently posted…Making Your Home as Child-Friendly as Possible in Time for Christmas

Thanks Clare – I loved the chatting – I even think they should introduce more chatting with speed networking sessions! 😂