What’s it really like at ‘Dinner by Heston Blumenthal’?

Heston Blumenthal is well known for his novel experimentation with food and his obsession with the science of cooking, including ‘food pairing’ which basically means the matching of often unconventional ingredients but which share molecular ‘similarities’ (such as caviar with chocolate etc.) 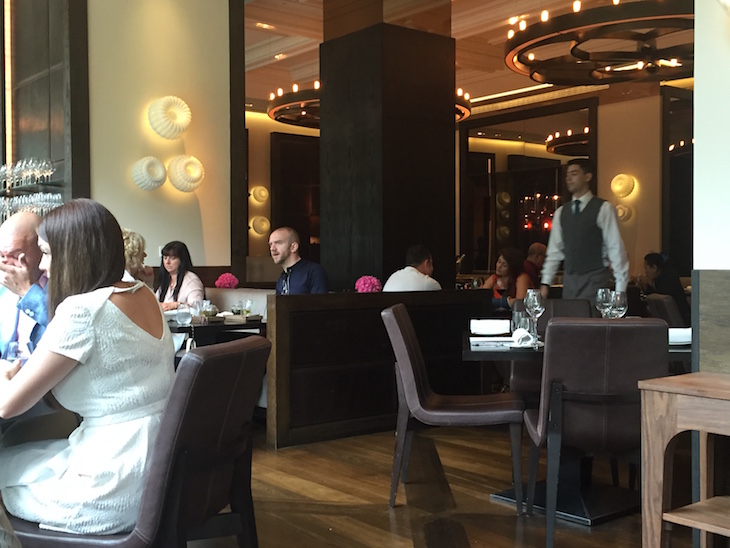 It was VIP’s 40th birthday, and a few months prior to the big date (while watching a cookery programme featuring Heston on the telly), he mentioned that he wouldn't mind eating at one of his restaurants. Being a dutiful wife of course, I made a mental note to do some research.

There was only one London restaurant of Heston’s – Dinner at the Madarin Oriental in Knightsbridge. Very lah di dah dahhling.

I reserved the table 3 months earlier (the earliest you can book) as I wanted a nice table and a fuss made of him. He's my VIP after all.

As we passed through the opulent entrance into the hotel, we were promptly directed to the restaurant at the rear of the hotel and received a warm welcome from the front of house who showed us to our table (overlooking a corner of Hyde Park).

A brownie point straight away as I had asked for a nice view and they'd remembered despite booking this ages ago.

The restaurant offered a relaxed yet sophisticated atmosphere and was relatively busy, but not heaving. 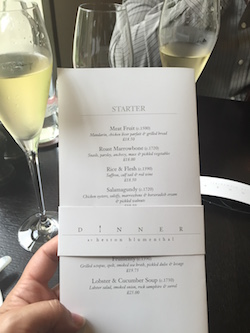 The waitress brought out two menus which were wrapped and sealed by a cardboard ‘cummerbund’ and then she wished VIP a happy birthday – another brownie point and I thanked her for this.

The concept of the restaurant is that the dishes have been inspired by some of the most lavish recipes throughout the centuries and the menu was created in consultation with historians.

And actually, a nice touch was that the menu provided additional information on the dishes’s origins, for those interested.

Then a different waiter came over and suggested we start with a glass of Champers to celebrate.

I'm not much of a Champagne fan (nor alcohol for that matter), but as we were celebrating a milestone birthday I decided to go with the flow. I'm glad I did – it was actually the nicest Champagne I've ever tasted.

VIP had a look through the wine menu and chose a Chilean Cabernet Sauvignon.

After a couple of minutes some sourdough bread and salted butter came out (the portion of butter served on a small slate square – very cute) and the waiter was ready to take our order. 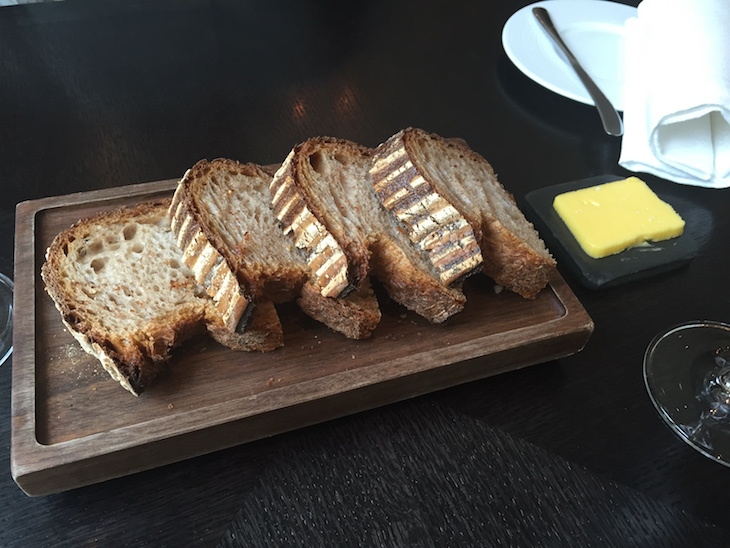 I decided to skip on the starter and have Chicken cooked with lettuces (with a side of mash potato) for the main, while VIP chose the Meat Fruit, the iconic dish made up of chicken parfait and foie gras, but which looks absolutely identical to a mandarin orange. 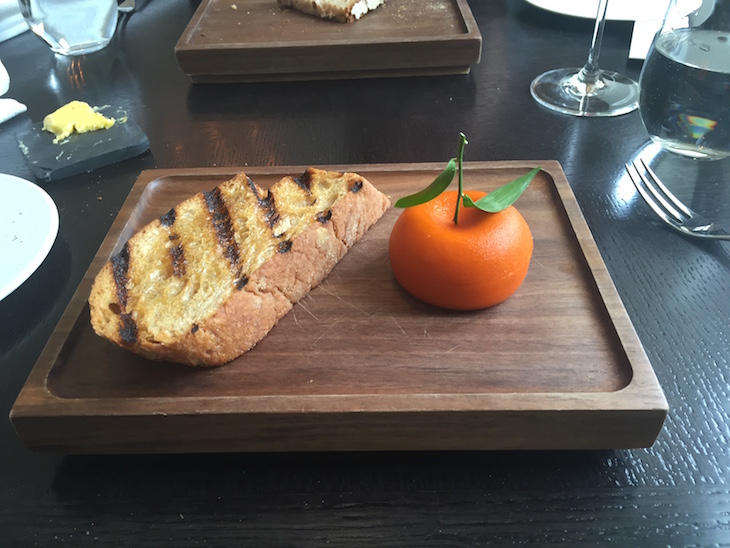 During the main meal I saw an ice-cream trolley (a vey posh one) being wheeled to the table next to us.

Except this was no ordinary ice-cream trolley – this was a liquid nitrogen ice-cream fancy Dan trolley – yes, they literally made ice-cream at your table – pretty amazing!

It was very theatrical with lots of smoke and had most of the restaurant watching. More on this later!

The main meals were absolutely scrumptious. The mash potato served with my chicken was the creamiest, smoothest mash potato I've ever tasted – heaven knows how they made it!

My chicken was accompanied by lettuce, which tasted of smoked walnuts – it actually made eating lettuce fun! 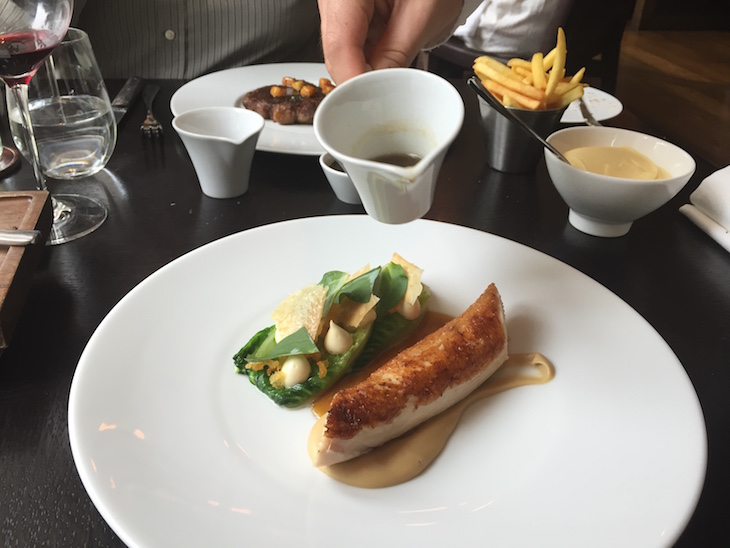 And VIP's meal consisted of a perfectly cooked Ribeye (Hereford Ribeye) and some extra crunchy fries, accompanied by a diddy dish with mushroom ketchup. 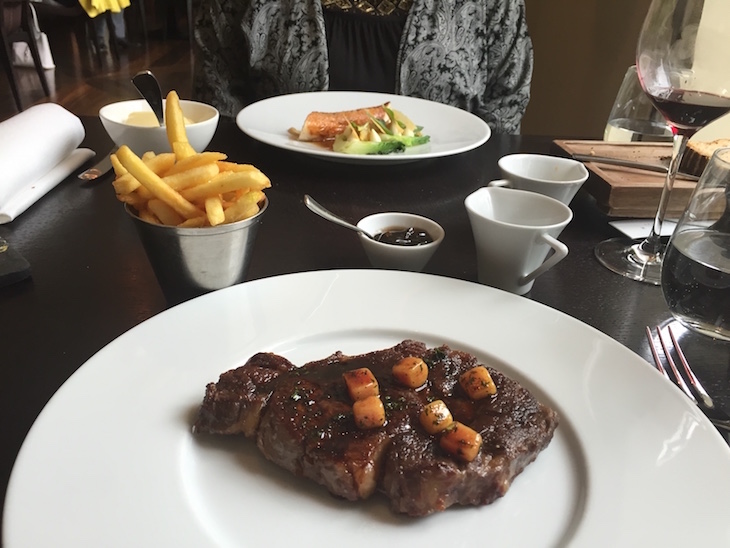 After clearing the table, the French waitress (who always seemed to be smiling and cheery) asked if we were ready for the best part of the meal. Now there’s a girl after my own heart!

For me the dessert IS the best part of a meal. That's an easy conclusion for me to reach as I have a such a sweet tooth.

But having seen the dessert menu and the ice-cream trolley, I couldn't decide on which one to have. So I did what any other girl would do with this dilemma – I went for both.

Well, actually we shared something called a Sambocade, which consisted of a goat’s cheese cheesecake with roasted figs and smoked candied walnuts. 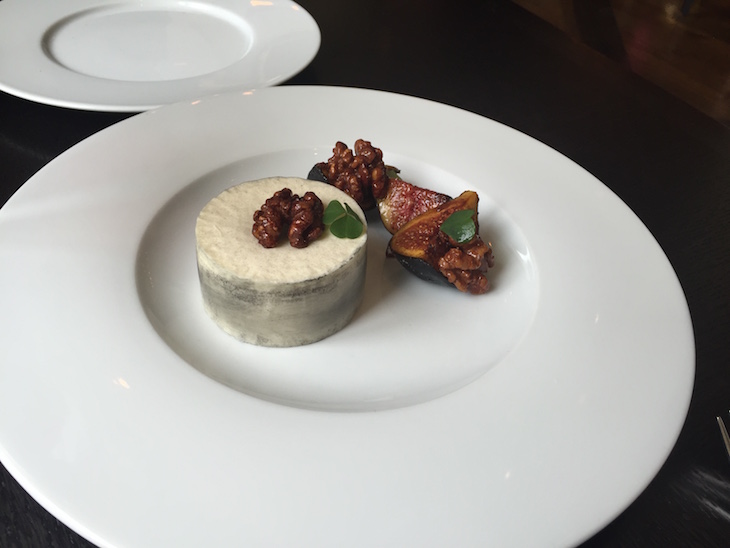 The cheesecake was made to look like a miniature cheese wheel and tasted absolutely divine.

Then it was our turn to have the ice-cream trolley – here's a video of them making it!

The toppings we could choose for candied fennel seeds, chocolate and walnut, freeze-dried raspberry and popping candy 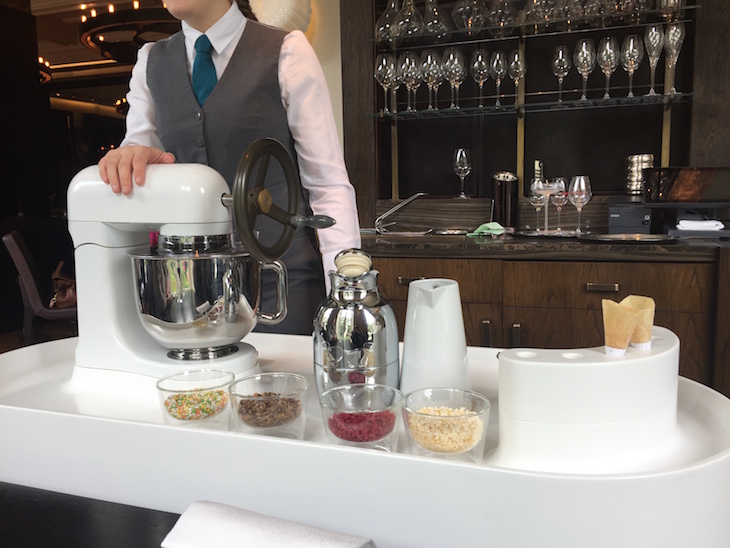 VIP opted for the fennel seeds and raspberry while I chose the chocolate/walnut and popping candy. Even the cone tasted like something out of this world. 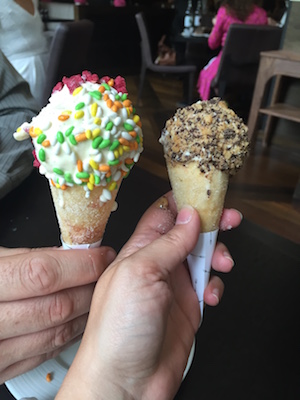 One of things that really struck us was the attentiveness of the staff.

It was a bit surreal to be honest; every time we needed something they were there right next to us without having to call them over – it was as if they had a sixth sense.

But the great thing was, we didn't feel like we were being watched and we didn't have anyone standing over our table. These guys were pros!

VIP went as far as testing the attentiveness of the staff by taking two huge gulps of his wine and lo and behold the waiter was there within nano seconds filling his glass.

I only had the quarter glass of wine (as I was driving later that day) and I appreciated that they removed it so that I wouldn't have to sit there staring at an empty wine glass.

Also, every time I went to the loo (twice if you were wondering…yes they were very nice!), I'd return to the table to a folded napkin. 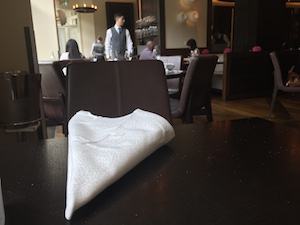 Service was second to none – the best I've ever experienced – and always with a smile and polite chit chat which was the icing on the cake.

The other thing that struck me about the staff was that they were all sorts of nationalities (mixed in with British waiters) – including French and Italian who all had a hand in serving our table.

I actually got talking to one of the waiters who said that he really enjoyed working there as the company treated their staff really well.

He told me that they had something on a Tuesday called Tasting Day, where the chefs showed the waiting staff how the food is prepared and what ingredients are used, so that they are better equipped to advise customers. And of course, they get to taste it too.

I asked him if Tuesdays were his favourite day at work. He gave me a knowing smile.

Let's just say it was three figures and north of a couple of hundred – quite a lot north. You can get more of an idea on prices by checking out the menu.

So of course we both thoroughly enjoyed the meal. We were made to feel extra special – as if we were the only couple in the restaurant as all the staff were so attentive and happy to chat without being over-bearing. All of this certainly helped to make the experience much more memorable.

In terms of expense, it was the most expensive meal I’ve ever had (and paid for), but it was also the best I’ve ever had.

It was also the type of restaurant that VIP and I would only ever eat in a handful of times in our lifetime. Well, probably just a couple of times – unless we happened to win the lottery of course.

What I also really enjoyed about the experience (apart from the food of course), was the opportunity to do some people watching.

Now, I’m a bit crap at spotting celebrities, but I did clock some people who had possibly never dining there – and a really young couple whom I suspected starred in some reality show. 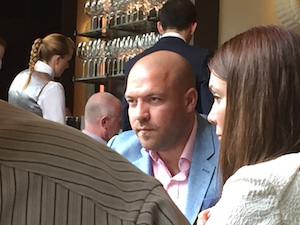 And in the unlikely chance that you happen to know him, I have to say that he seemed like a very nice man indeed; he apologised to VIP when the steam from his ice-cream being made wafted over to our table – see, these posh types are really nice after all.

Oh my goodness, what a wonderful experience. I have never eaten in a posh restaurant before, will have to drop some big hints

It looks amazing there I really want to go sometime.

It was pretty amazing – best get saving! ?

That looks awesome and very original! and like a lot of food! lol x

Ha.. Yes it was a lot of food… I certainly filled my belly that day! ?

Wow restaurant looks really nice. Good to know you all had a nice time.

Thank you! If only we could do that every month…

Wow that was spectacular! Actually, your food didn’t look nearly as ‘weird’ as I expected it to! Glad your hubby had a great birthday treat.