What’s Big In Japan For Families?

Now that my kids are firmly in their tweens, with one about to enter his teens, I can afford to be a bit more adventurous when it comes to choosing family holiday destinations.

VIP and I have always been intrepid when it comes to exploring; in our 20s we both did the whole round-the-world backpacking thing – and 20 years later that adventurous streak is still there.

As if to prove we’re not afraid of long-haul, last year we flew to South Africa and this year we ended up in the States. We try to make a point of not taking the kids to the same destination year-in, year-out because we believe that experiencing different traditions, customs, history and cultures really does broaden the mind – and we’re also trying to instill that sense of adventure in our kids.

One place (amongst many) on my agenda is the Far East; I’ve already been to Thailand and Malaysia, but I’ve long had a fascination with Japan. To me it’s one of those mysterious and intriguing destinations – and that’s enough to whet my appetite to visit.

So what springs to mind when you think of Japan? For me it’s Tokyo, Cherry Blossom, bullet trains, Hello Kitty (yes, really!) and the song ‘Big In Japan’ by German band Alphaville (1984) – hence the title for this post.

But I know that there is so much more to the destination than the aforementioned – and if I’m to one day get there with the kids, then I’d need to be a bit more clued up on what’s on offer.

So here’s what I’ve discovered… 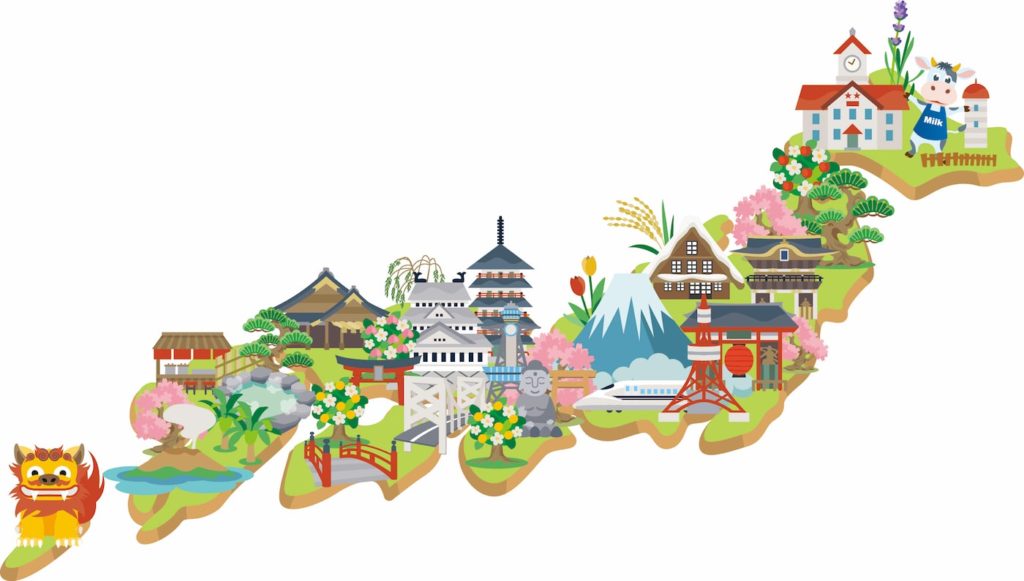 Japan is in northeast Asia and is roughly the same size as California. The destination is made up of thousands of islands (6,852 to be exact) including the four main ones – Hokkaido, Honshu, Shikoku and Kyushu.

It’s also a land of forests – and these cover about 25.12 million hectares (or around 66% of the country’s land area – who knew?!) – plenty of trees for hide and seek opportunities then!

Japan is nine hours ahead of GMT, and although the official language is Japanese, Brits won’t have a problem being understood as most residents can speak some English.

The currency is the Yen and although it’s known to be an expensive destination (the cost of living is around 13% higher in Tokyo than in London according to Numbeo), if you plan ahead it’s possible to do Japan on a budget – even with kids.

In terms of getting there, direct fights normally take around 11-12 hours (around the same time it took us to get to South Africa) and average return fares start from around £580, with the three main airlines being All Nippon (ANA), JAL and British Airways. 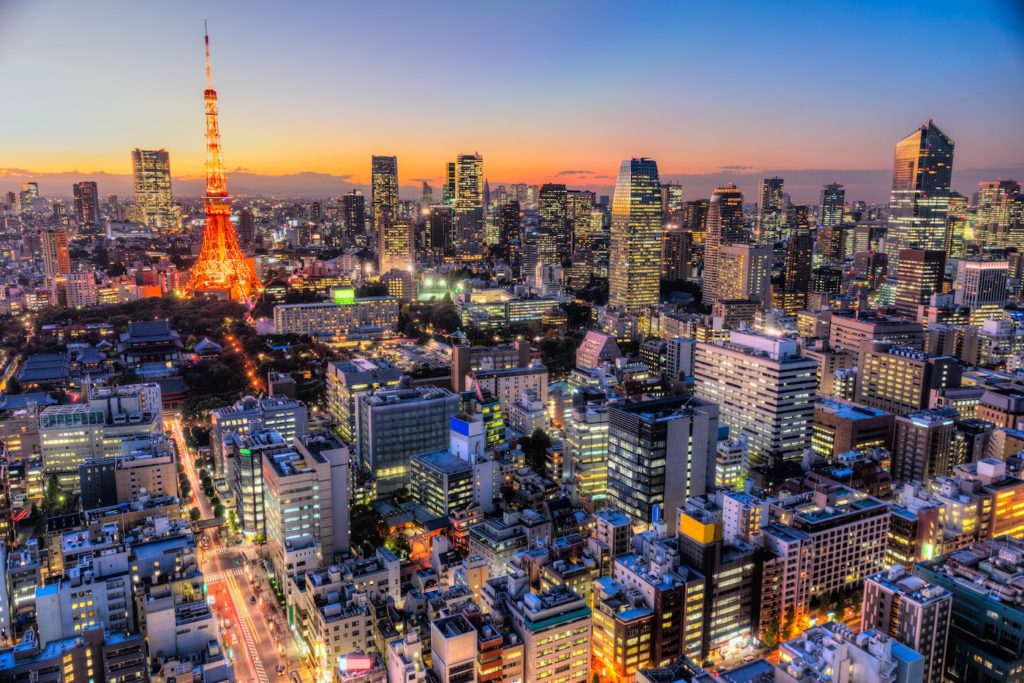 If I were travelling to Japan I’d definitely have to factor in a visit to Tokyo (or another one of Japan’s big cities), just so that I could get the ‘been there, done that’ T-shirt.

Attractions like the 333m-high Tokyo Tower, which resembles the Eiffel Tower, are a must to take in the bright lights of the city. It’s also affordable at around 900 yen for the main observation deck (around £6.40 per person).

But don’t discount other big cities in Japan. Kyoto, which is located centrally on the island of Honshu, is steeped in history and houses around 20% of the nation’s cultural treasures, meaning that a visit here is sure to be an educational one.

The Historic Monuments of Ancient Kyoto were designated a UNESCO a World Heritage Site in 1994 and the city also contains roughly 2,000 temples and over 30 museums.

Plus many of the city’s attractions are free, which is great news for families on a budget.

Venturing off the beaten path

Bearing in mind that Japan is a land of contrasts, it makes sense not to fixate on just visiting the big cities.

In fact, it would be a crime not to venture a little off the beaten track given the plentiful parks, museums, mountains, hot springs, gardens, temples, markets and galleries the destination offers.

If you’re unsure where to start and how to make the most of your visit, it might be a good idea to seek the advice of the experts – a reputable tour operator – to help you out on this.

One of the companies I’m familiar with through my job as a travel journalist is Japan Experience tours, which has been helping people plan their trips to Japan for more than 30 years.

The company doesn’t just cater for those looking to join a tour – it also helps with things like car rental, activities, flights, accommodation and rail passes, and can also put together bespoke itineraries depending on what you’re looking for – a one-stop shop basically!

While checking out its website I came across this 12-day family-friendly tour ‘Capitals and Treasures of Japan’, which costs from £1,759 and includes pretty much everything to get you and your family out there and see some fantastic sights.

What I recently learnt was that a ‘Travel Angels’ service is also offered. These are English-speaking natives living in Japan who are ready to welcome you and introduce you to their home.

They can be contacted by phone and email during your stay to provide information and help you out. Now why can’t every travel company offer this type of service…? It’s a great idea!

Whether or not you’re in a big city or taking a detour to explore the stunning scenery, Japan caters really well for kids, with activities, attractions and events aplenty year-round to suit even the most demanding of youngsters.

And it’s also a very safe destination with an historically low crime rate, which is reassuring to know. For more information on the destination as a whole, it’s worth consulting foreign travel advice though. 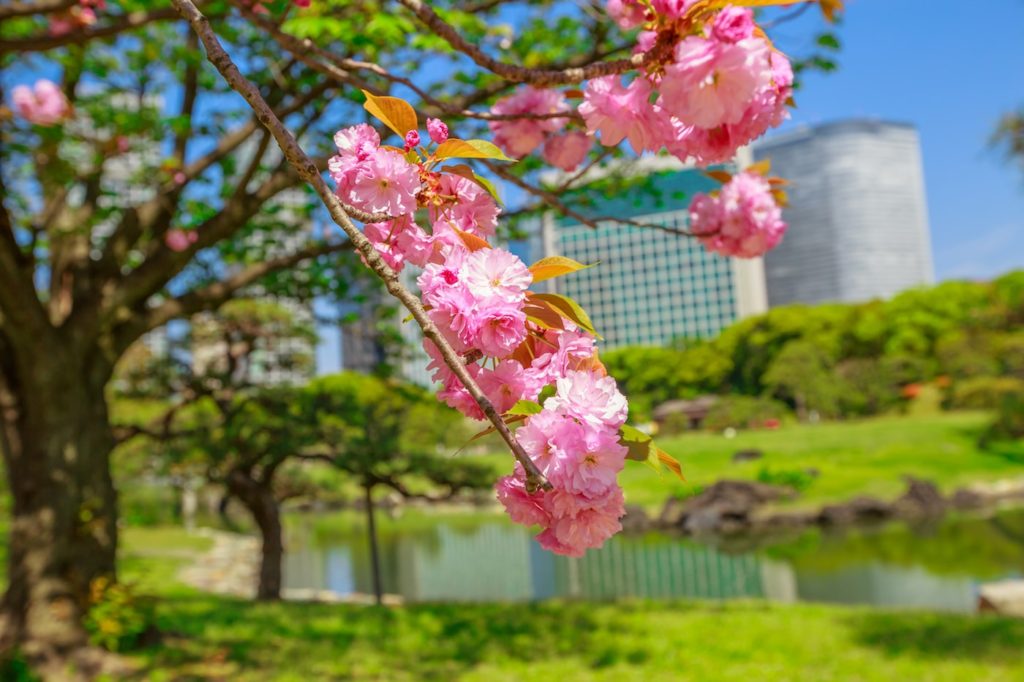 Try getting off the beaten track in Japan – it's a land of contrasts!

There are plenty of ways of getting around Japan – including internal flights, trains (the network service is pretty amazing), buses and of course private vehicles like taxis, although the latter are pretty expensive, so avoid them for long journeys if you can.

Again, by planning ahead and getting things like transport passes and sightseeing discounts well in advance, you’ll be doing yourself a favour in terms of saving money.

Alternatively, a great way of seeing any country is by train and the Japan Rail Pass offers discounted travel on nearly all services of the extensive JR Transportation Network – including the bullet train (Shinkansen). And who wouldn’t want a go on that?!

Long distance buses and train service are other low cost options to bear in mind when you’re watching the pennies.

The best of the rest (and a recap)

With these tips in mind, planning a trip to Japan on a budget with the family needn’t be tricky to master; and hopefully I’ve inspired you enough to want to ‘Nippon’ a plane and discover the ‘Land of the Rising Sun’. 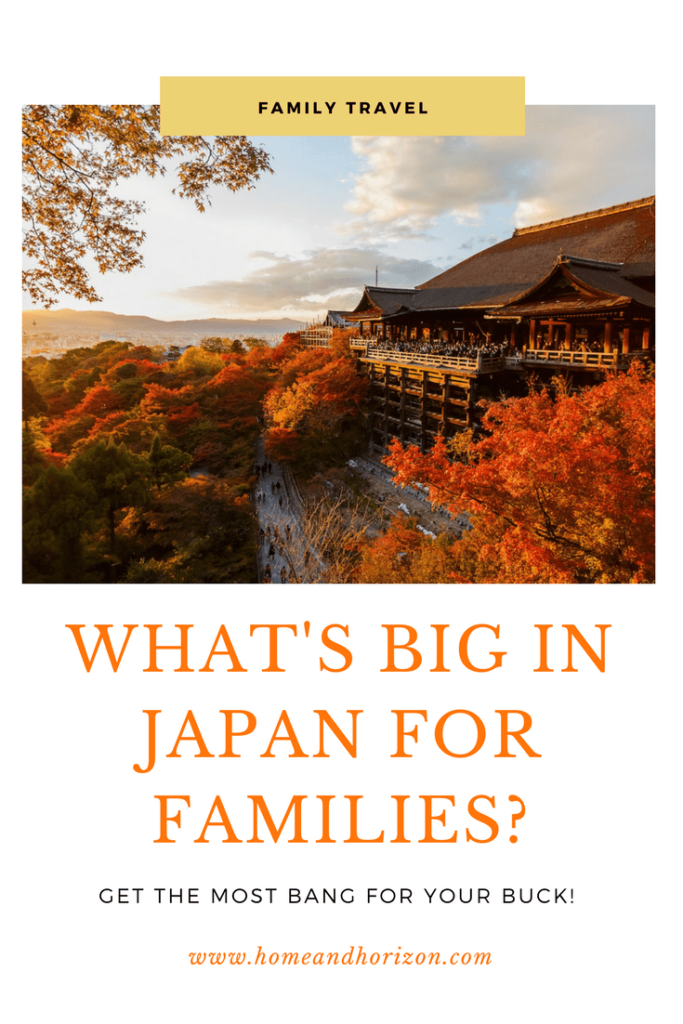 It’s my life goal to get my partner and his girls to Japan for a lonnnng, full adventure one day – might be a while saving up but!

Thanks Lucy – I’m sure it will be worth the wait when you finally get to go!

I would absolutely love to visit Japan, it’s definitely on my list. I find their culture so fascinating. Great tips!

Thanks Caroline – it looks like a fantastic place doesn’t it?

I just went to Japan and visited Tokyo, Osaka, Kyoto and Nara! All fantastic cities 🙂

That’s fantastic Laura – bet you have some great, long-lasting memories!

I really want to visit Japan. It’s one of those places that has always fascinated me. When my toddler is older, I will definitely look at booking

You and me both Jenni!

I would also love to visit Japan one day, it would be amazing. When I have children I also plan on taking them on holidays to different places too 🙂 I think it’s good for them

Japan is absolutely on my list of places to go! From the culture to the amazing cities and countryside it sounds like such an awesome experience.

It would be one of those holidays you never forget wouldn’t it?!

i always enjoy posts about japan , theres so much to do and see , it really is a wonderful city with so much culture and things to be amazed with

Absolutely! I haven’t even covered a tiny fraction of what there is to do there!

I love reading about Japan because one of my oldest friends lives there with his family. He loves it there and we’ve vowed to reunite next year. Reading this has given me a preview of the type of activities I can do when I visit.
Jacqueline recently posted…Positioning Statement? What Is That? Why Do I Need One?

Ah that’s lovely to hear – have fun if you do end up going!

Japan is on my bucket list too! It just strikes me as a place I’ll never experience anywhere else x

Japan isn’t somewhere I’ve ever really fancied going, I have to be honest – I always seem to favour tropical rainforests and beaches in the Caribbean/South America. That said, I love the sound of the Tokyo Tower, and it’s a bargain price to get up to! Plus all these pictures are absolutely gorgeous! x

I’d absolutely love to go to Japan, it just looks like such an amazing place, and I’d love to go during cherry blossom season. It’s great that you’re not afraid to take your kids to further afield destinations x

Thanks Rhian – although they’re not so keen on the long haul flights they have got such a kick out of seeing lots of great places. I think many of us (me included) want to tick Japan off the list!

I love that you holiday to somewhere different each year and like you I do feel that it is important to experience other cultures! I would love to go to Japan x

My children have never been on an aeroplane! Id love to take them around the world! Japan sounds incredible!!
Lucie Aiston recently posted…Baby is 4 Months Old

I have never been to Japan before but have always wanted too! Sounds like an amazing place

I would love to visit Japan, there is so much to see and do! Sounds amazing!!
Lilinha recently posted…Garlic and Mustard Marinated Lamb Steaks Recipe @SimplyBeefLamb #LoveLamb

You and me both Lilinha!

I’d love to be able to say I’ve been there too.

Japan is very much on my to do list, I’m not sure I can wait until my kids are older. I really really want to go!

Japan is on my list of places to visit. I think the whole ambience would just be amazing!

I would love to go to Japan one day! This post is so helpful and full of really great ideas for everyone that wants to travel to Japan! Whenever I go anywhere I always need to know how to get from one place to another, so having your advice about the all day metro ticket is something I’m sure many people will remember when they go travelling to Japan! 🙂

Thanks Lily – if I can just help one person that’s good enough for me! Thanks for your kind comments.