From toddler to tween: a little girl’s bedroom overhaul

We’ve lived in our current house now for eight years. We like to call it our ‘forever’ home…well, until VIP and I are empty nesters that is – and then we might have to downsize.

One of the very first things we did when we moved is was decorate the kids’ rooms; we wanted them to settle in quickly and have their own space – and this was the quickest way of doing that.

Five-year old Luis got a Fireman’s bedroom, complete with a real pole to slide down from his bunk bed, plus little fire buckets that he kept his pens and pencils in.

And three-year old Nadja got a pastel blue and green bedroom based on fairy cakes, inspired by her window blind.

Last year we updated 11-year old Luis’ room to a Minecraft theme, but Nadja – who is nine years old – still hasn’t had a bedroom overhaul.

As is usually the case, something always seems to get in the way of decorating, but Nadja had gone from toddler to tween (in the blink of an eye it seems) and was desperate for a new look.

So when I heard from Inspired Wallpaper, a modern designer wallpaper company, to see if I wanted to try out their range I jumped at the chance. Well, I couldn’t let the girl down now could I?

The company let me loose in their online shop and I really enjoyed browsing the site and checking out their unique designs.

They seem to have so many choices – from damask wallpaper for that timeless sophisticated look and modern geometric designs through to understated floral options and even bang on trend glitter designs – yes, really.

What’s handy is that you can search by colour scheme, room type or style. They also have some well know brands on there including Coloroll and Crown – and a brand which sounds very posh (Vymura) but I can’t pronounce.

She’s got the look

But I knew exactly what kind of wallpaper I was after – and when I saw it on the screen, I knew I had to make it mine (or rather, Nadja’s).

It’s gorgeous. And more to the point, it’s very apt, almost as if they has made it especially for her.

It’s called ‘It’s a Dogs Life’ and, as the name suggests, it’s a dog-themed feature wallpaper. 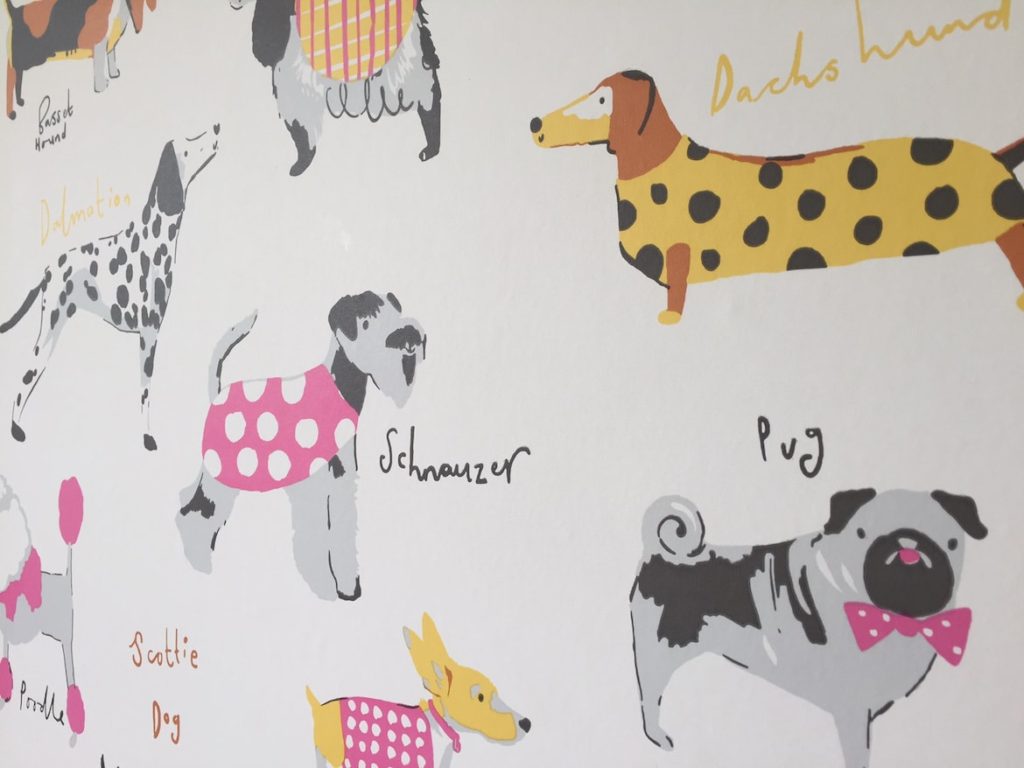 Now if there’s one thing Nadja is mad on, it’s dogs – especially pugs (watch this video for proof!), so I knew she would have picked this herself if she could. Us mummies just know don’t we?

But I wanted the room to be a complete surprise for her so I kept schtum about which wallpaper I had picked!

The before and after shots

It’s easier to get an idea of how much effort went into the update if you see the ‘before’ and ‘after pictures’, so here are the before ones… 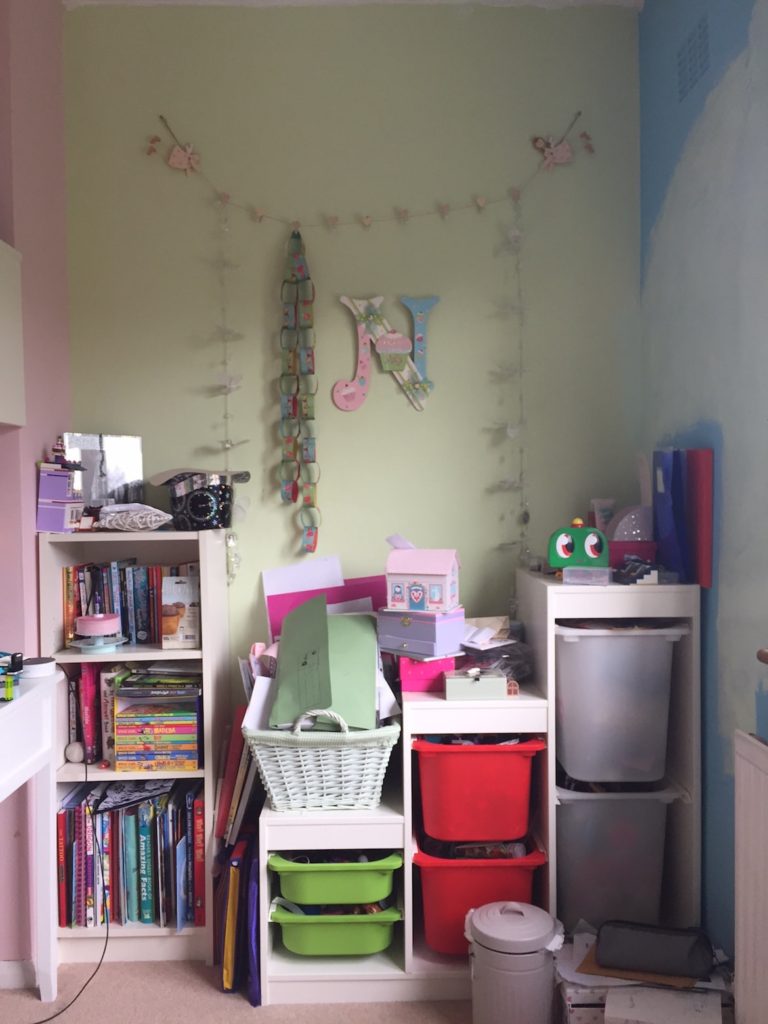 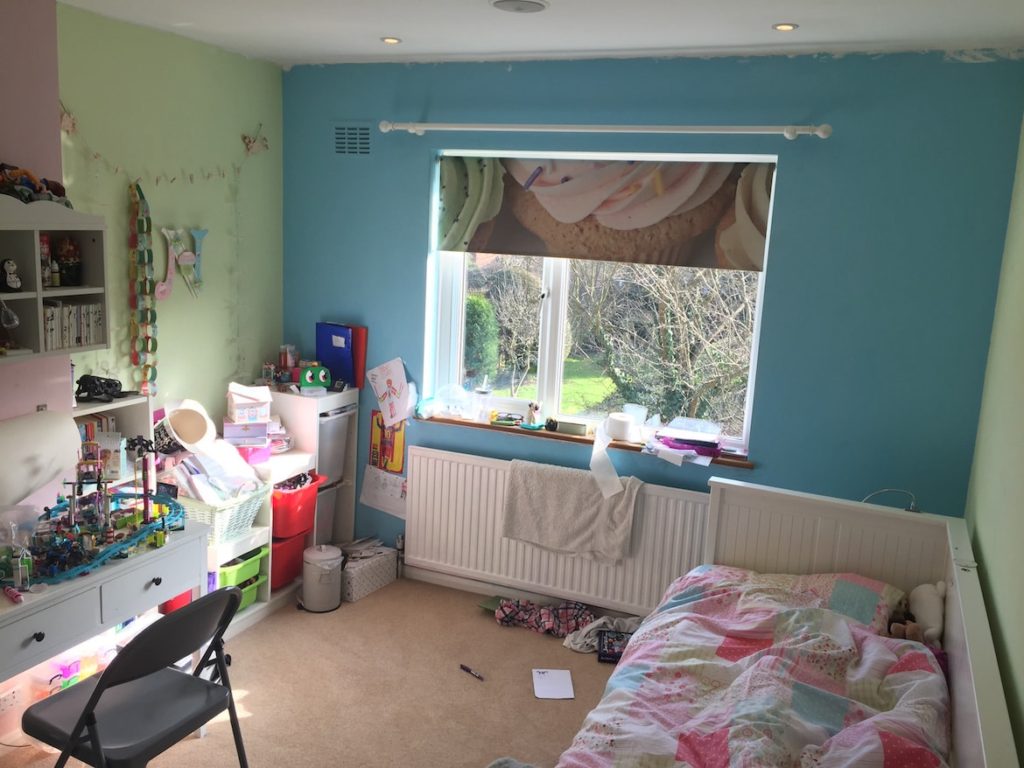 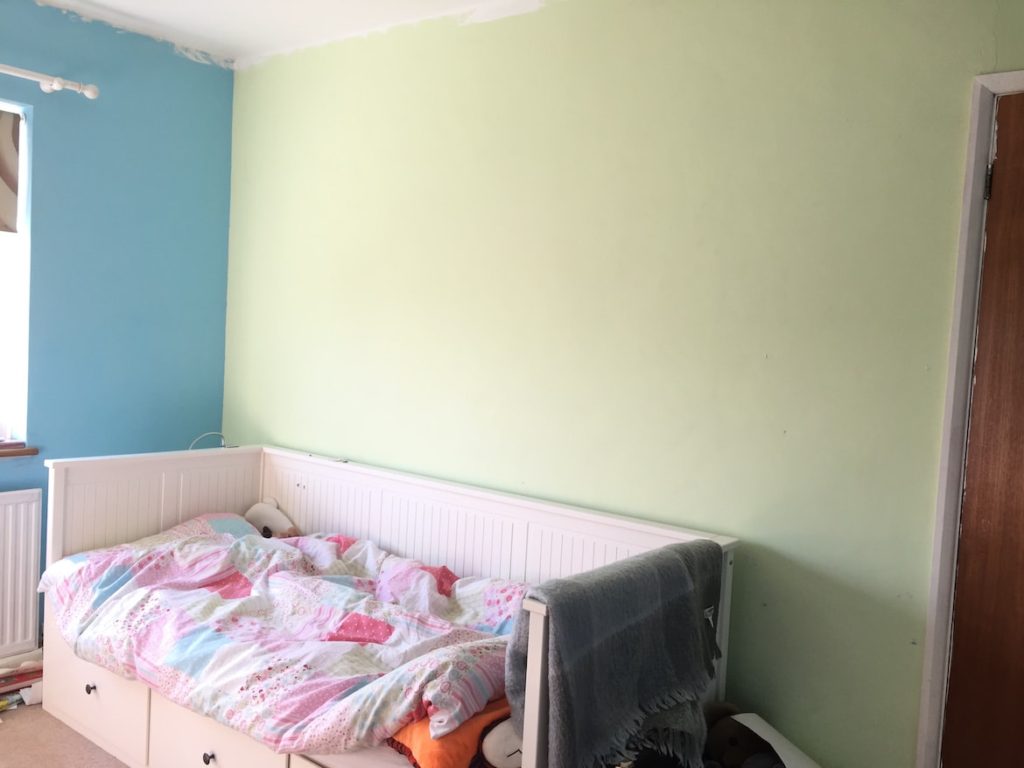 The blank wall with the green paint has been replaced by this unique, feature wallpaper. Plus it has been a bit educational as Nadja now knows what all the dogs are called – she had never heard of a Dachshund before! 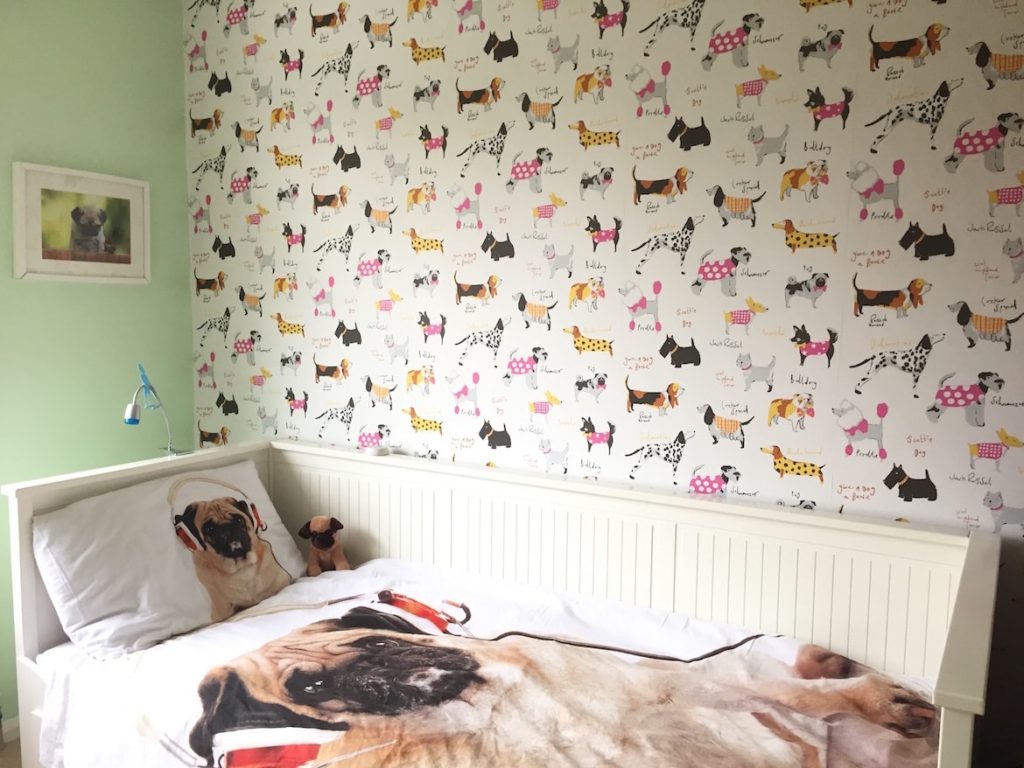 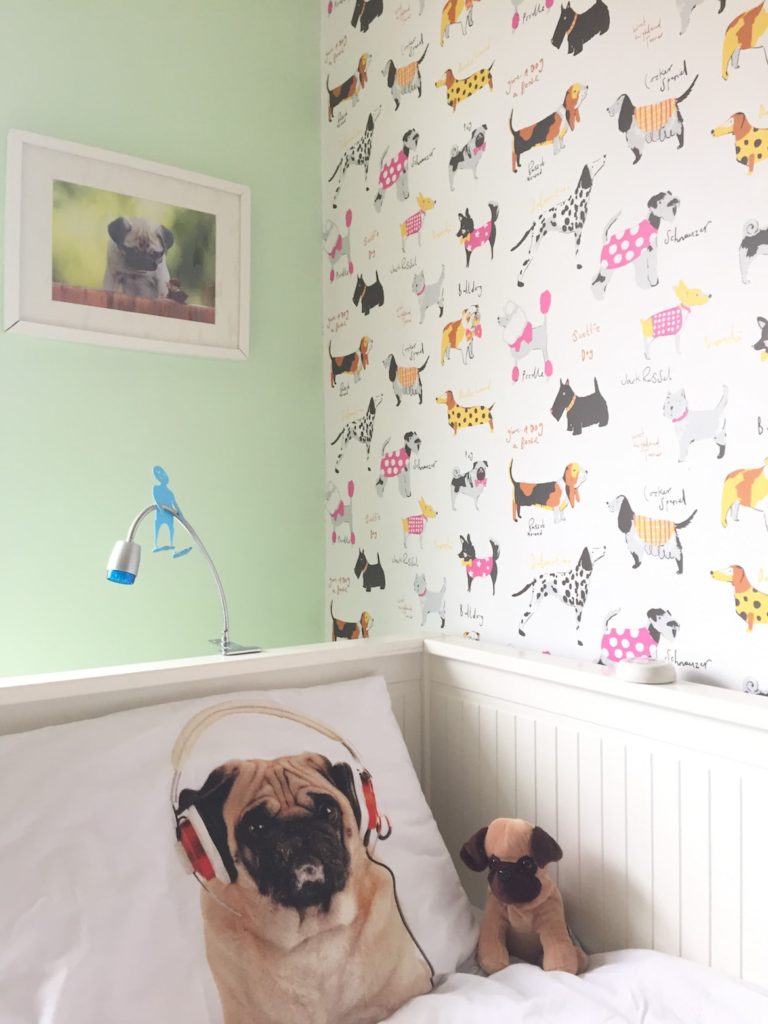 The cubby hole has had an update with a inspirational quote and a tidy up. 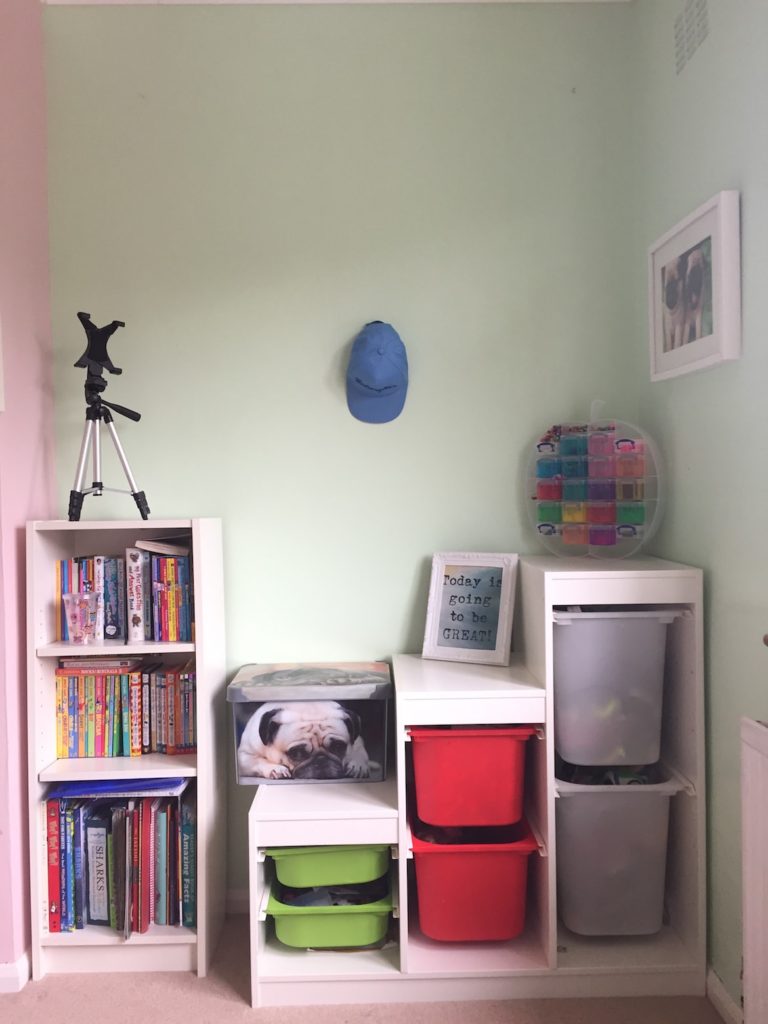 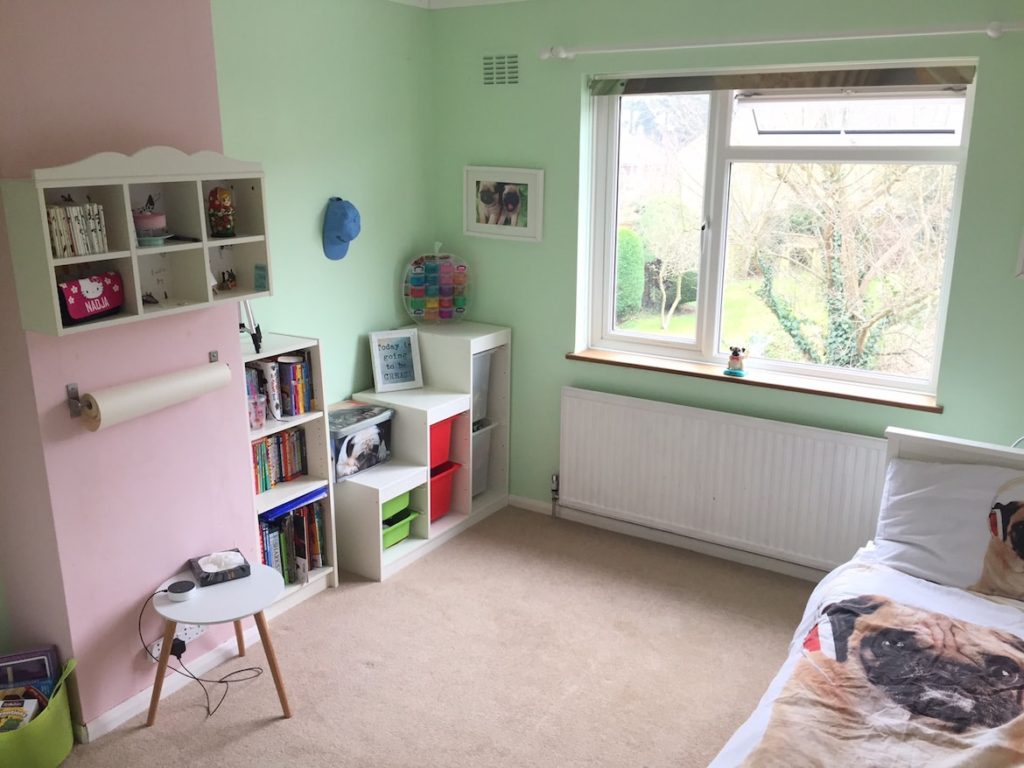 The wallpaper was by far the most impressive update for her. Well, it had to be – it was a feature wallpaper and it really pops on the wall next to her bed.

Fortunately, it was a cinch to hang (and match) and, because of its quality (it was really thick), we didn’t experience any tears or wastage.

In fact, I even had some left over paper to be able to upcycle my daughter’s cubbyhole wall cabinet. I’m so pleased with the result as it ties the look in all together. 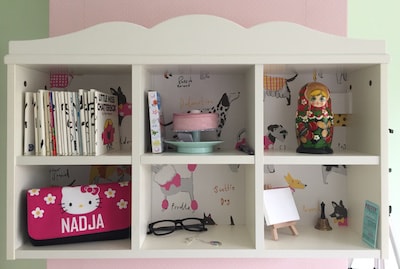 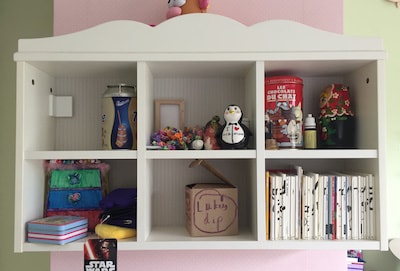 As my daughter is mad on pugs (did I mention that?), I decided to push the boat out and buy her some pug-related accessories to complete the transformation.

A pug cup from Peacocks for £4 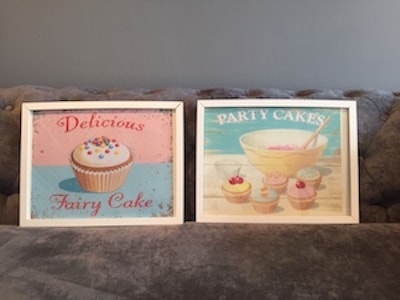 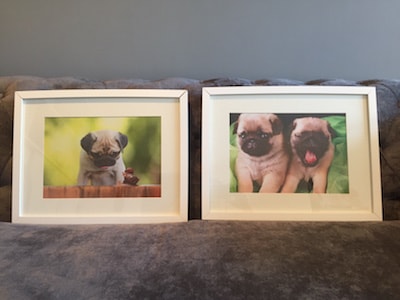 Nadja is of course absolutely delighted with her new ‘tween’ bedroom. In fact, she’s so proud of her new space that she’s insisting on having her best friend over for a sleepover this weekend to show it off! Can’t blame her really….

It reveals…
– What the room looked like before (a complete mess!)
– How easy it was to put up the Inspired Wallpaper (even for amateurs like ourselves)
– The finished ‘toddler to tween’ bedroom
– Nadja’s reaction to her new room

*Inspired Wallpaper offered me the wallpaper to use in return for an honest review.

I love transformation videos! The theme really ties in well with Spring coming up & when the Summer sun shines through I bet it’s going to be so lush!

Great makeover, the room looks so good I love it! I am in the middle of doing a makeover on my sons room but I am so picky I keep changing my mind. Glad your daughtr is pleased with her new room

Ohh, you have a talent in decorating! The output is so nice! Now I have an idea for my room make-over.

Wow, what a lucky girl Nadja is! That looks gorgeous and clever you hanging the paper by yourself. I know I’d end up looking like a character in a slapstick comedy if I tried anything so fiddly. Gary is good with most DIY but even he asks for his bro’s help when it comes to hanging wallpaper. Great result! x

Thanks Tania – VIP did most of the wallpaper (I did the advising – oh, and the painting) but as it was good quality it was easy to apply…

wow you did a great job on this bedrrom. Love the wallpaper. R

What a great design lift! Loving the doggy wallpaper

Her new room looks so much better, I love the dog theme and the dog wallpaper is adorable! love the colour scheme as well x

Thanks Ana – she had her friend over at the weekend and now her friend wants the same thing in her bedroom!

I absolutely love it and I adore the wall paper, it is brilliant and a perfect transformation x

Wow, what a fantastic job you’ve done! The wallpaper is adorable, I’m not surprised that Nadja loves it. The pug accessories are so cute and Such a clever idea to use the wallpaper on the the wall cabinet too.

Yes I’m glad I had some leftover wallpaper to be able to do that… a bit different! Thanks Caroline x

This has to be the CUTEST wallpaper I’ve even seen!

I love it as well – I just hope she doesn’t change it for at least a few years!

This is sch a cute decorating post, hank you for taking the time out to share this. Happy Monday 🙂 x