To paper or not to paper…?

I’m quite partial to wallpaper. Not so much the designs that feature flowers or garish patterns, but more the textured wallpaper that looks (and probably is) rather pricey; the kind that you are more likely to find in a five-star establishment or a posh restaurant than in a B&B in some dodgy town.

I also quite like Damask wallpaper – of the subtle kind. In fact, that is what’s featured on my kitchen wall. For some reason it just works – and I’m quietly confident that I won’t need to be changing it anytime soon.

Although wallpapering is always going to be more of a hassle to do as opposed to painting, the extra effort is worth it if you get it right. A wallpapered feature wall, for example, can add depth to a room, as well as a feeling of warmth – quite important when you live in Britain!

And the great news is there’s such a plethora of choice out there, there’s bound to be something that is just the ticket – just take a look at wallpaperdirect.com – a site where you find it impossible to take ‘a quick look’…30 minutes later and I’m still drooling over some of the fabulous designs.

As a wallpaper fan (not every wall, mind), I was interested to hear that Graham & Brown (one of my favourite designers) is marking its 70th anniversary this year by announcing its ‘Wallpaper of the Year’ – Marbled Charcoal and Rose Gold. I didn’t even realise it was common practice for companies to announce their best wallpaper (or is this a first?).

Apparently, the winning wallpaper (below) combines two key trends identified by the Graham & Brown design studio for 2016, Marbled Charcoal and rose gold to create a luxurious designer look. I can’t say this would be my first choice of wallpaper because….well, it just wouldn’t, but I admire the fact that it’s a striking design and I can just see this in a cigar room of some five-star establishment. 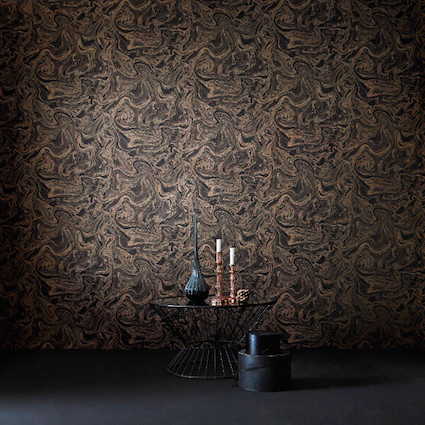 Paula Taylor, the company’s colour and trends specialist, puts it better: “Our Wallpaper of the Year draws inspiration from the natural simplicity of marbling in stone, complemented by metallic embellishment in blushing gold hues for a glamorous, handcrafted aesthetic.”