The Perfect Bathroom: What I Chose & How I’m (Nearly) There!

I’m halfway to creating my perfect bathroom; it’s already a functioning bathroom which I’m over the moon about, but aesthetically it’s missing a couple of key features, namely a door and a mirror.

When funds become available, it will be completed of course, but that hasn’t stopped me from using my (nearly) perfect restroom. So let me tell you how I chose it, where I bought it, who I used to install it and most importantly, what it features.

Back to (bathroom) basics

I desperately needed a new bathroom. Actually, I needed two new bathrooms (the main family bathroom is yet to get an overhaul), but with the ensuite being the worst of the two (and the least functioning at the time), we decided to tackle that first.

The previous owners of the house had, for some bizarre reason, tiled on top of wallpapered walls. As a consequence, by the time we bought the house, half the tiles were either missing or half hanging off the wall. Did they really think tiles would stick to paper?

Other problems we faced were a leaking loo, mould-covered walls and the most impractical bathtub that we’d ever seen! The thing was clearly a made-for-two ‘lovers’ tub, but looking at the size of the thing you could probably fit a horse in there too. Boy, did we struggle to get it out of the house; at one point we thought we’d have to start removing windows.

Not only that, but the whole bathroom suite was an avocado colour – not uncommon in 1960s décor I’m sure. Perhaps if we’d waited another 20 years it might have come back in fashion. So you can see why we were desperate for an upgrade. 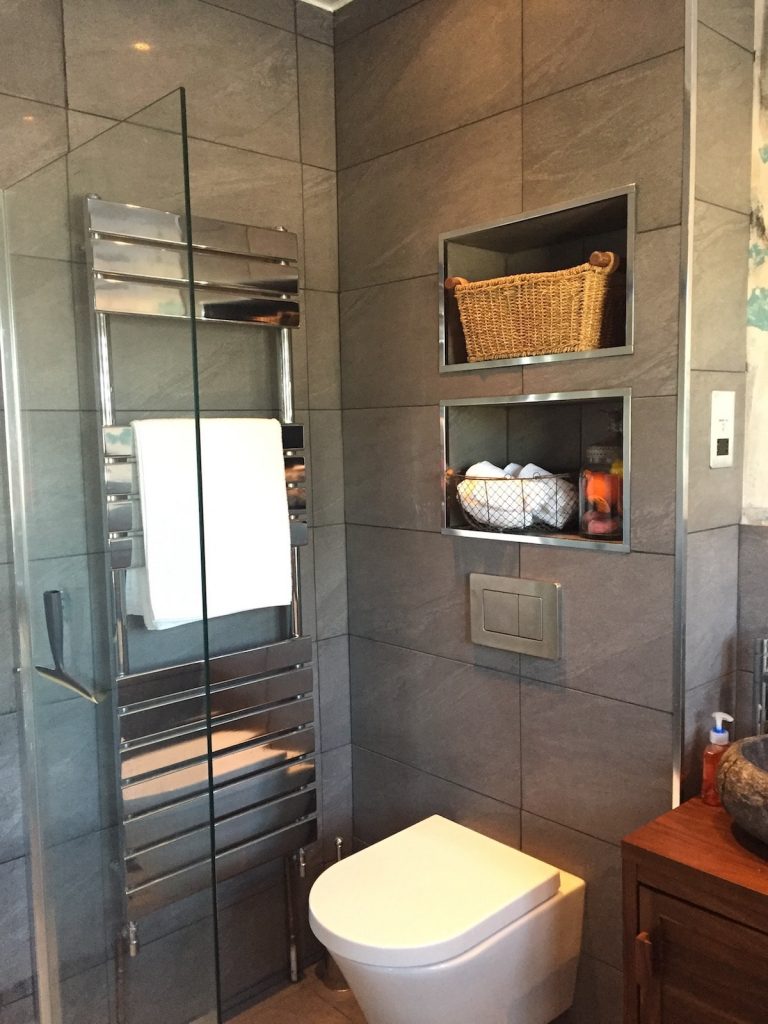 From tramp to vamp

As far as I was concerned, my bathroom needed to be taken from ‘tramp’ to ‘vamp’. I knew I wanted something completely opposite to what I’d lived with for the last six years.

So I decided on a relaxing ‘spa-themed’ creation featuring unusual textures, sophisticated décor and practical, but classy fixtures. Something reminiscent of what you’d expect in a five-star deluxe hotel perhaps. Except I needed to do mine on a budget.

My planning was meticulous; I’d researched where I could get great quality suites for less, and I managed to design the room in such a way that I could fit in both a walk-in shower and a bathtub. Had I known about products such as walk-in baths from the start, it would have made my life a lot easier, but I got there in the end!

So what did I go for? Well, in terms of décor I chose dark grey tiles for the walls and floor (from Tile Mates), with one of the walls highlighted as a feature wall (from Topps Tiles). 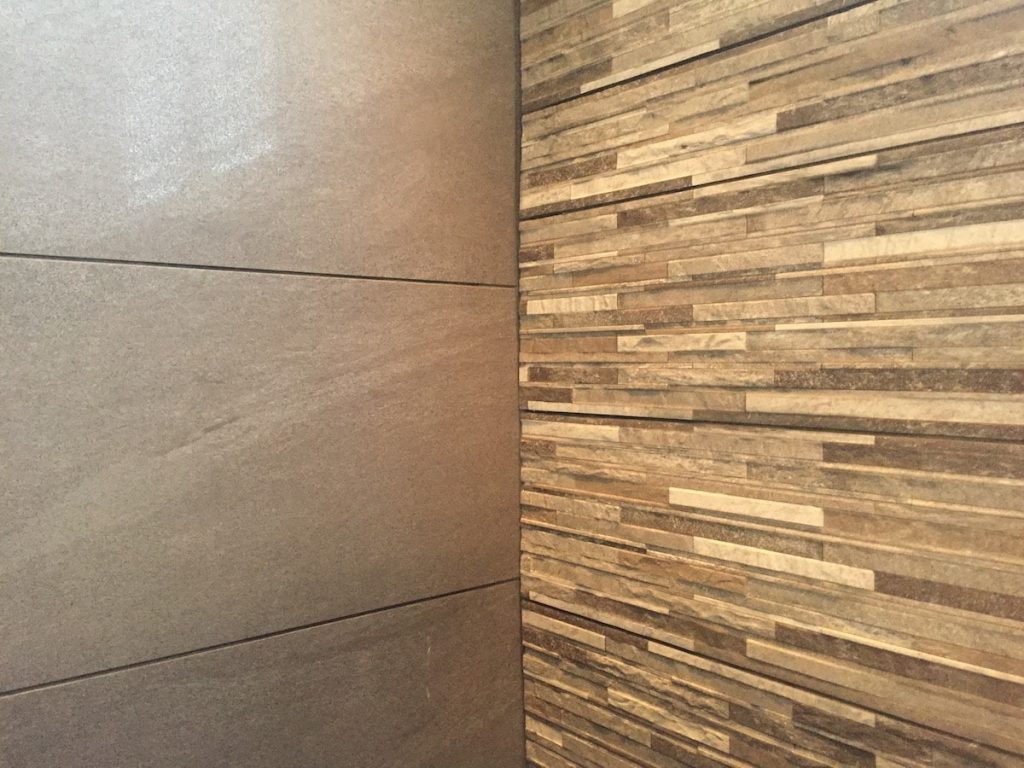 I initially wanted something called split-face tiles for the feature wall (they look stunning), but everyone I spoke with said that I couldn’t have them as a backdrop to the bath because if they got wet behind them, then I’d be in a lot of bother.

Instead I went for a feature tile that replicated the look of a split face tile, which meant that I didn’t have the hassle of worrying if it got wet or not. I’m thrilled with the look – but what do you think?

For the bathroom suite, it had to be the classic white. It would look great against the dark grey and white, as they say, goes with anything! I’ve also used subtle pops of colour (orange) to add a bit of contrast, making sure that even the small details (the bath foam I keep) is in an orange bottle (or decanted into one!)

The great thing about using colour as a highlight accessory is that it can be changed really easily – even from things like shampoo bottles and hand towels to soap dishes and picture frames, just changing the colour of these to match each other really pulls the whole look together – and it’s so simple to chop and change.

The other thing that was a ‘must’ for my perfect bathroom was underfloor heating. Being a seasoned traveller, I’ve stayed in many an establishment where there has been luxurious (a very fitting word) underfloor heating – and it’s just so…comforting is the right word. 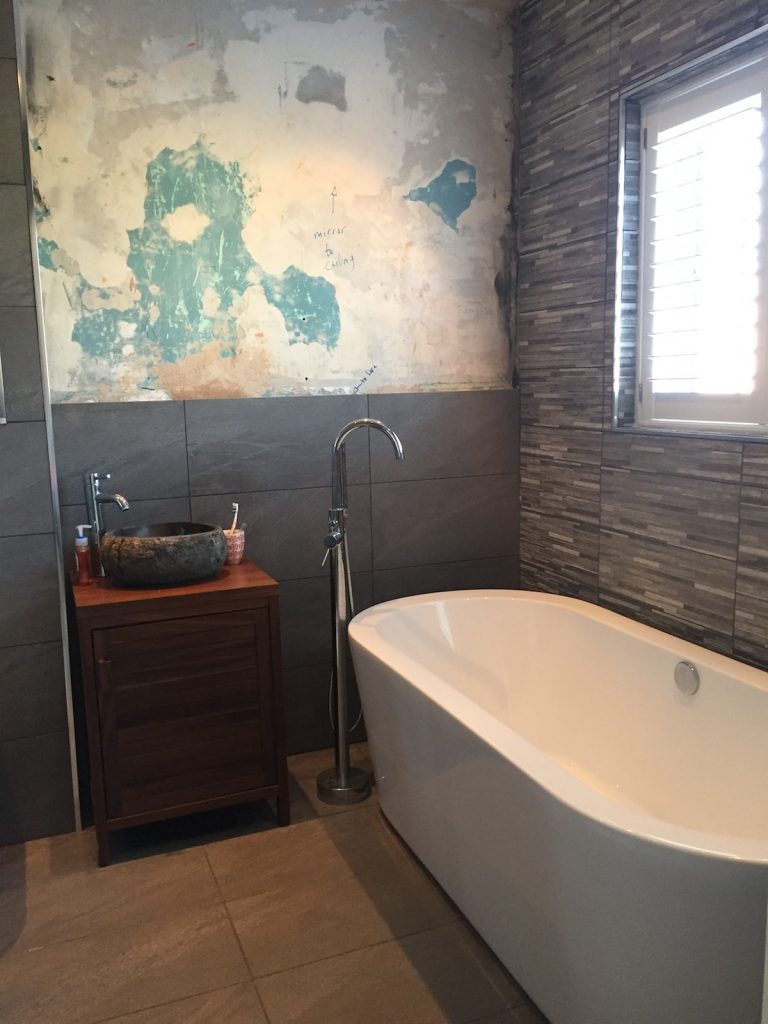 I remember my dad saying to me at the time of designing the bathroom not to choose underfloor heating as I wouldn’t use it. But this is where men and women differ when using the bathroom.

Men go in, do their business and leave (unless they get stuck on the loo with the paper or a book – why?) Women, on the other hand, like to linger and pamper themselves. I for one relish in taking my sweet time; it’s therapeutic and hanging out in a spa-like bathroom offers perfect ‘me time’.

Plus if I get to relax while enjoying all the comforts of underfloor heating in the process, it’s a win-win! So no, I don’t regret getting the underfloor heating. I use it all the time and I’d recommend it to anyone.

Finally, I decided that I needed a statement piece for my bathroom (apart from the mirror that is yet to be arranged), and that was to opt for something reminiscent in a spa. And it had to be a stunning natural stone sink – with the obligatory white flannels in a basket (like you see in posh five-star hotels).

Yes, I stole the idea from the plush hotels, but if you’re going to steal, then steal from the best I say. And I think you’ll agree – you wouldn’t mind washing your face and mitts in this sink…. 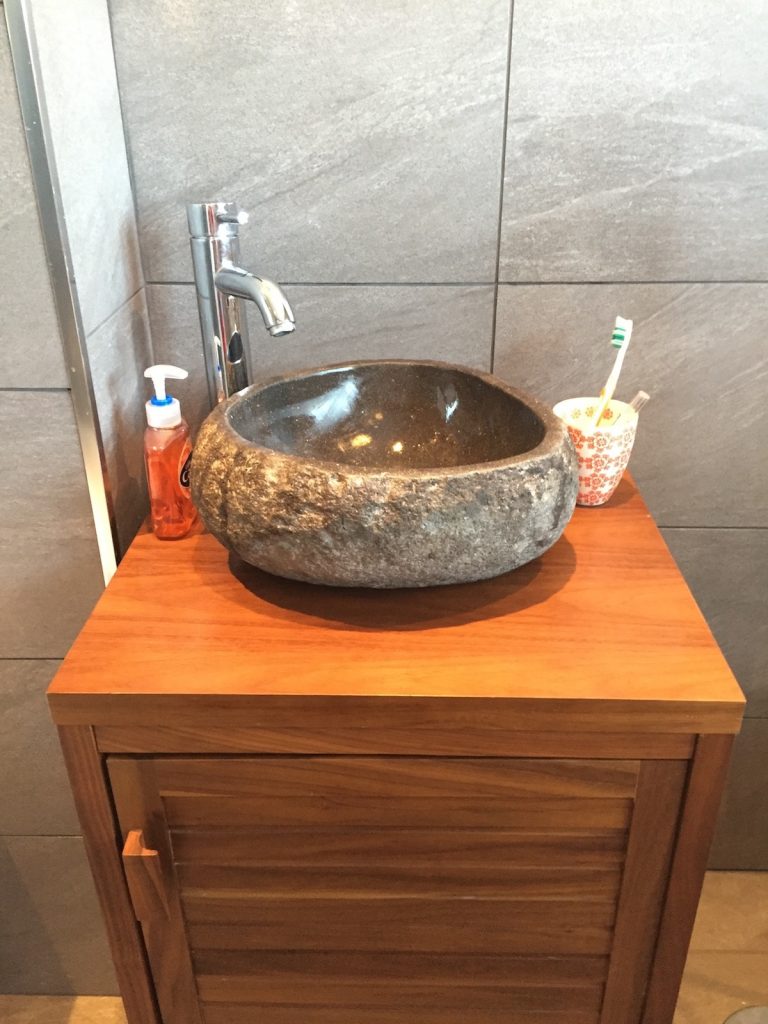 As I mentioned earlier, being thrifty I enjoy finding great deals on good quality products, but it takes a lot of dedication and researching to find the best tools for the job as it were.

I was lucky to find most of what I was looking for online – either from places like popular auction sites (eBay!), through to online shops, meaning that my small budget wouldn’t be stretched too much.

The only unfortunate situation was that I had to endure six months (yes, SIX months) of mess in my bedroom. This is because I chose builders who could only work at the weekends (they had other jobs in the week) and the revamp would take much longer.

Obviously, I wasn’t banking on it being a six-month project, but when I’m soaking in the bath surrounded by bubbles and candles and thoroughly enjoying myself, it seems like a distant memory…

So you see, I’m lucky enough to have been able to design, create and enjoy my (nearly) perfect bathroom.

If you could design your perfect bathroom, what would you make sure it featured? 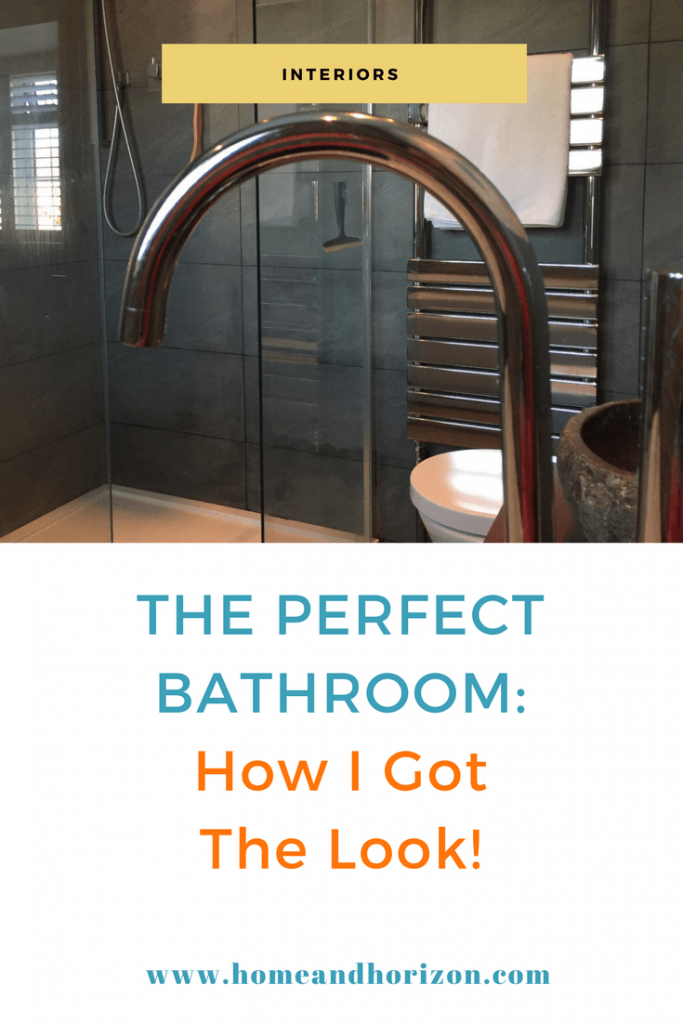 This is really, really lovely. Upon first glance I thought the missing tiles above the bath was a map of the world!

I could have passed it off as that couldn’t I? What a great idea ha ha

The Perfect Bathroom
Amazing what can be done with a little bit of money. Great work. Fantastic effort.

Thanks Sharon – looking forward to getting it finished!

Your bathroom is amazing, I love the underfloor heating and it’s going on my wish list, the bathroom is really beautiful.

Thanks very much Sue – I’m planning on getting it finished this year!

It looks gorgeous. Our neighbour has just re-done his bathroom and en-suite and has underfloor heating in both. He absolutely loves it.

Thanks Hazel. Underfloor heating is amazing. I could just stand there for ages..!

I think once the mirror is added this bathroom will be even more perfect that it is now, I love the flooring as well as the tub, i so need a tub
Anosa recently posted…{Fashion Monday} Skinny Ankle Grazers

Thanks Anosa – with the kids still young I don’t get to use the tub as often as I’d like, but it’s getting easier 🙂

Oh wow this is a very stylish bathroom and I bet you will be over the moon when it’s all finished. Ours is also nearly there but not quiet finished.

Thanks Laura – it’s tricky getting those last funds to complete it, but I’m sure we’ll both get there!
xx

Oh that is one nice bathroom! I love all the little bits that tie in, and the free standing tap is amazing!

We thought it was quite la-di-dah! Thanks Stephanie 🙂

That’s just stunning! I wish ours looked anything like that. Beautiful!

Thanks so much! Feeling very lucky of course 🙂

Love it Lauretta! That statement sink is stunning and I love the tiles. Enjoy soaking in that gorgeous bath tub 😊

Thanks Caroline! I certainly – with a glass of wine!

Your Your bathroom looks amazing. We had ours done a couple of years ago but it is more practical than stylish

Thanks Kara – practical is good as it means it should last you years! I’m definitely going for practical over stylish when I come to do the main bathroom..

Oh I love this! I am so jealous, we’ve been doing ours since earlier this year but constantly had set backs due to issues with our neighbour an the drainage system!

I love this! The grey compliments the textured tiled wall perfectly. I love the round sink, it really breaks the room up and helps it to flow really well. Good luck with the rest of the project!

Thanks Emma! I love the natural stone sink too – definitely gives it a spa feel 🙂

What an absolutely stunning bathroom! I can only dream of underfloor heating – that would be so lovely, especially during the colder months 🙂

Thanks Helen – I got mine on eBay and it works a dream – it wasn’t that expensive. It’s worth shopping around.

This is gorgeous, not everyone gets lucky to design, create and enjoy a perfect bathroom as yours. Aesthetically i think i would be lost without the help of professionals but you’ve made it look very easy 🙂 Kudos!

Thanks very much…I enjoyed shopping for it, I know that!

That is a beautiful bathroom I love your sink. We recently did our bathroom on a budget (there’s a post on my blog) and tbh I love it all. Like you the previous owners were a nightmare so it was just so much better
Pinkoddy recently posted…Why Ready Brek is the Only Breakfast you Really Need!

Apart from the kitchen it’s really expensive to do up a bathroom, so I tried to stick to a budget – just have to save to get the other one done now!

Lauretta it looks just gorgeous! I love the design features you have used. I totally agree about us girls having time in the bathroom, we just need it! You have done a fab job of your bathroom, well done xx

Thanks Kerry – once the door is on and the mirror is in, it will look even better! x