Marriage counselling: is it worth saving your relationship?

One of my good friends, Jo, is a marriage counsellor and every time we get together we tend to have a good old goss – as you do with great girlfriends.

We regularly discuss our relationship stories, along with how to deal with teenagers, and I’m always curious as to the types of situations she has to deal with at work.

Being a professional, Jo never reveals details of her clients, but she has described scenarios where she’s had to mediate between the two parties.

And as far as I can tell, a large part of her job is based on her ability to listen, process the information and then ask questions – as opposed to just dishing out advice. How wrong my preconceptions about marriage counselling were.

Apparently it's better that couples come to their own conclusion on why they can’t see eye to eye – and also work out (via Jo’s suggestions) on what they can do to help resolve matters.

Makes complete sense when you think about it – reaching a mutual agreement on how to take things forward is a far better conclusion then trying to follow a set of someone else's rules – which would probably go out of the window in the heat of a barny.

Jo also revealed that the reason most couples end up choosing marriage counselling is so that they can say what they really think and get their point across without being shouted down.

Counsellors typically act as a mediator for couples who want to communicate with each other without resorting to uncontrolled outbursts.

If I wasn’t doing what I already do, I would have liked to have given this type of profession a go myself. Helping people is what comes naturally to me – and the idea of ‘fixing things’ or making them better is equally appealing.

At one stage I even started a degree in psychology, but all the terminology (and the fact that we had a crap lecturer) convinced me to switch degrees.

Back to Jo….we spoke about a few things the last time we saw each other – I asked her if she had ever watched the TV series ‘Lie To Me’, which is all about reading micro expressions in people’s faces and being aware of their body language – she hadn’t and seemed really keen on watching it.

We also chatted about what's narked us off – husbands included – and how we've handled certain situations.

And this is the part that gets interesting from a behavioural point of view. Divulging a little of my own experience here, most arguments with VIP are born from discussions where:

(1) One of us feels unappreciated/taken for granted which leads to an argument when criticism comes into play.
(b) We have totally different ideas on how to deal with a certain situation and both of us are adamant that our way is the right way.

There are other things too of course, but these are the main reasons we argue.

Fortunately, we never argue about money (which, interestingly, is one of the top causes of arguments for most couples) and we don't argue about general day to day things that are petty or meaningless. And because of that we very rarely argue.

Whereas VIP has a laid back personality, he's also very opinionated about well, pretty much everything.

I'm more highly strung personality-wise, but I only have strong opinions on a handful of topics that I really care about or mean something personally to me.

And where VIP would tackle an argument head on, I'm definitely the worst type of arguer, preferring to run away from any sort of conflict.

If we argue I'll say my piece and then hole myself up in the bedroom, silently cursing him as I get emotional out of frustration. To me, having an argument suggests that we're not compatible.

But I couldn't be further from the truth. Occasional arguing in a relationship means that it's healthy and thriving and you're both able to let off steam (and opinions).

Fortunately for VIP and I, our different personality types mean that it somehow works – 99% of the time. 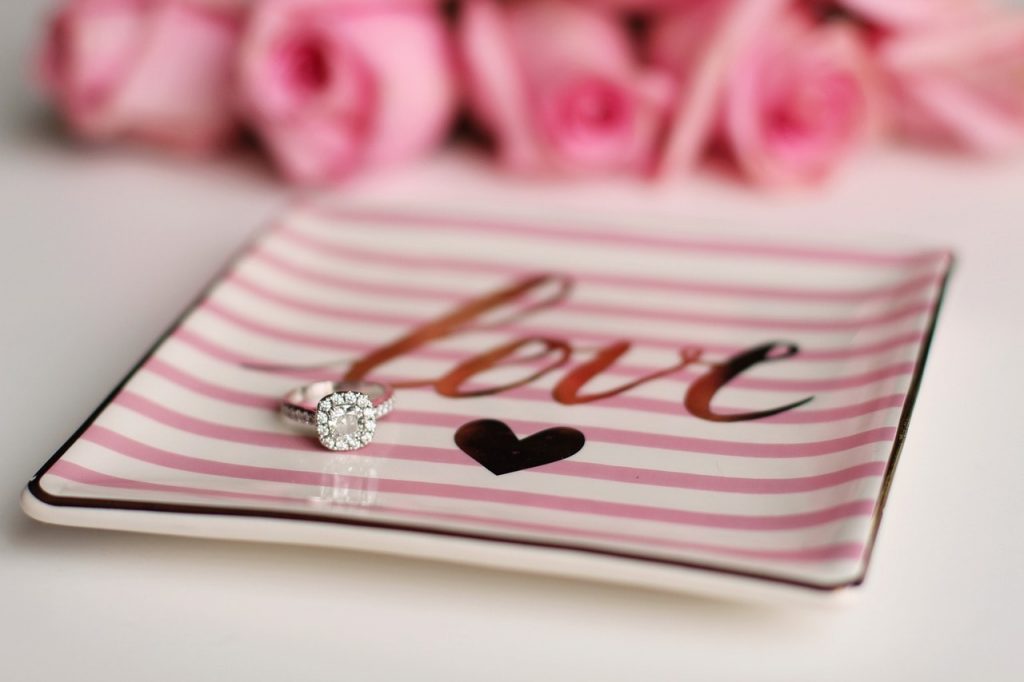 But it's when those arguments start becoming more frequent and over smaller issues that it's time to question the reasons it's happening.

I know of couples that argue every single day. First of all, I don't know where they get the energy to do so and secondly, could you be bothered – really? It's stressful and their blood pressure must be through the roof!

Some couples thrive off this and it works for them. In fact, one couple that we know even have full on blown arguments in front of us.

It starts off by being mildly entertaining, but by the end, we don't know where to look.

But they are cool with it – and neither of them take it to heart. In some ways, I admire that.

I think I'd die if VIP sparked up an argument with me in front of people. But I think he knows me far too well to do this anyway. If not, I'd shoot him ‘dagger eyes' and he'd soon get the message.

Is marriage counselling for you?

There's a lot of stigma about seeing a marriage counsellor to revive a relationship, but I'd have no qualms about using one myself.

If you've invested so many years, energy and emotions into a relationship why wouldn't you want to try to see if you could make things better – for the sake of your own sanity if nothing else? This makes even more sense when there are kids involved of course.

From what Jo tells me, people come away from marriage counselling sessions with a new-found respect for one another. They are able to talk, listen and discover how the other person really feels.

Couples learn to see their relationship as an equal partnership – and one where they might both have to compromise to make it work. And there are no grudges in doing so.

And they'll also learn that it's totally okay to have different opinions and viewpoints on things – it's what makes life exciting.

And in recognising this, when there is some conflict in any given situation, they can learn to keep calm and logically argue their case.

You don't need to go hell for leather, firing on all cylinders to get your message across. You also don't need to patronise or talk down to your partner to be ‘heard'.

Finally, Jo has three pieces of advice for couples wondering whether to try marriage counselling:

1. Ask yourself if you REALLY want to save your marriage. Sometimes, a couple will turn up and you can tell who is there because they believe in the relationship. The other one will be there to say that they've tried, but deep down they aren't concerned about it working out.

2. Is it a violent or abusive relationship? If so, you're trying to get help for the violent partner rather than save your marriage. Let me save you the cost of marriage counselling: get them the help that they need first.

3. Are you hiding anything from your partner that is causing you concern? If saving your marriage means that you'll have to live the rest of your life suppressing things that you really want to do, you need to ask yourself if it's worth it.

And if you do decide that it's something you could try, there are plenty of options out there – have a further read of how marriage counselling can work for you.
Last but not least, I'll leave you to ponder a quote from Robert C Dodds.

“The goal in marriage is not to think alike,
but to think together.”

I'd love to know your thoughts on marriage counselling – would you try it if things got too much to handle? Or would you rather try and work things out for yourself – then walk away if you were unable to?

A Pin For Your Lifestyle Board… 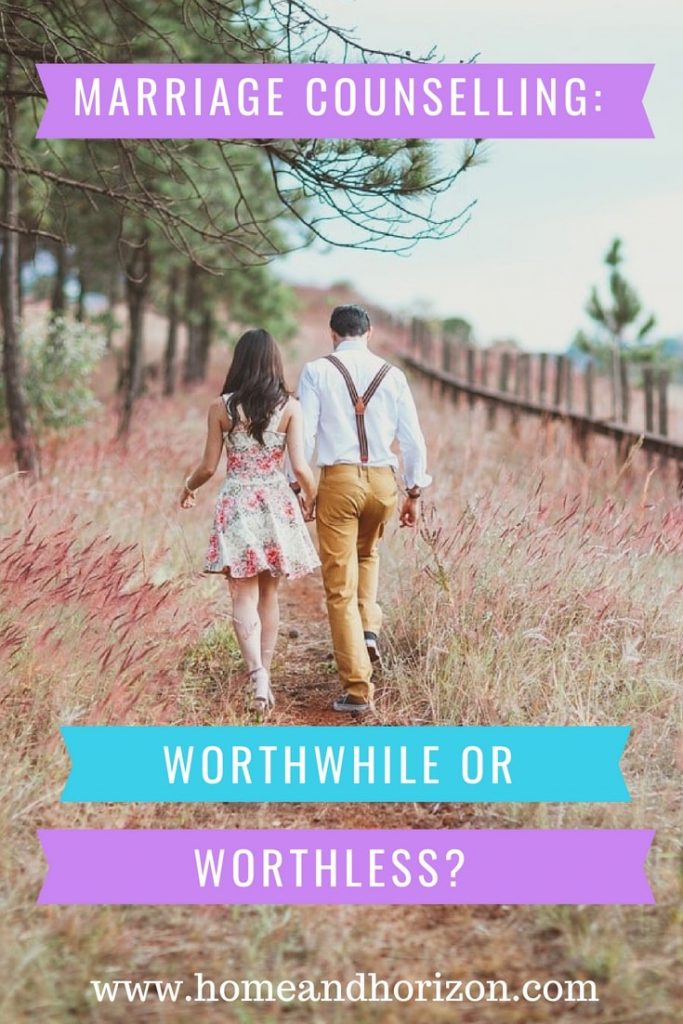 I think it is worth it. There’s referee for games, and in terms of conflict between two people, the input of a third party helps.

This is some really good information about marriage counseling. It is good to know that it would be smart to try to find a mediator. Having someone who can help control the conversation when things get heated.

Yes – that’s it. Having a situation diffused must be better than getting worked up and feeling your blood pressure rising!

You just never know what would have happened do you? But I’m sure you made the right choices for you at the time Becca.

I think sometimes marriage is entered for a need rather than for anything else such as my first marriage where we got married because we had to if we wanted to live together (thanks for thank uk military) I don’t think any amount of counselling could of kept us together as we got older we became different people and while he preferred to sleep around and beat me I wanted to focus on our home and my own goals. For counselling to work you still need to have that passion for each other and if both people don’t have that then it’s just a waste of time and money.

Really good point Jade and you hit the nail on the head. Both parties have to want to be there and want to make it work. I’m sorry to hear about your previous experiences – thank goodness you are out of that relationship now – and probably much stronger for it.

Yes – that’s very true. Divorce has been made much easier in the last ten or so years – and I do think people go into marriage for the wrong reasons sometimes.

I think so many people give up on their marriage without really trying. You have to try everything possible, including counselling before you give up on it. Mich x

Yes – totally agree Mich – I think (at least for the sake of the kids) that I would try everything possible IF I really wanted it to work.

Great information here. Marriage counselling is a good thing to go for if a marriage is in trouble.

I definitely think marriage counselling is an avenue to communicate but it’s ultimately up to the couple if they really want to stay together. I do wonder though if couples actually tell the truth when there’s someone else in the room.

Marriage counselling can definitely help relationships where there are communication issues, I feel. It’s good that it’s an option if folk need it, that’s for sure!