Like most bloggers & vloggers, there are few places that I go without either my iPhone or my Macbook – but I’m usually with both.

In fact, the only time I can think of when I’m not within a few feet of either device is if I’m swimming or in the bath.

Much to VIP’s annoyance, I appear to be glued to my devices 24/7. So much so, that even when I’m on my way to the office (commuting from Kent to London), by the time I sit down at my desk the battery on my mobile is down to around 17%.

But as they say…needs must – and growing a blog/vlog needs some serious commitment and I make the most of the spare minutes I get.

However, when I’m on the move I need a backup plan. Why? Because when my phone goes below the 50% charge, beads of sweat start to gather.

Yes, I panic. I guess it’s a sign of being addicted to your mobile! But I also know that once I go under the halfway charge mark, I haven’t got much phone time left – it almost seems to speed up!

So my backup plan typically consists of a powerbank or two. In the past I’ve tended to pick these up from High Street shops for a few quid.

However, the problem I find with the smaller, lower voltage powerbanks is that with daily usage, I end up charging up the powerbank as much as I charge my mobile.

So then I end up carrying two of them around with me – an extra one as a backup!

And this is what I’ve been doing until I was offered to trial the Kavson Besiter Eclipse. 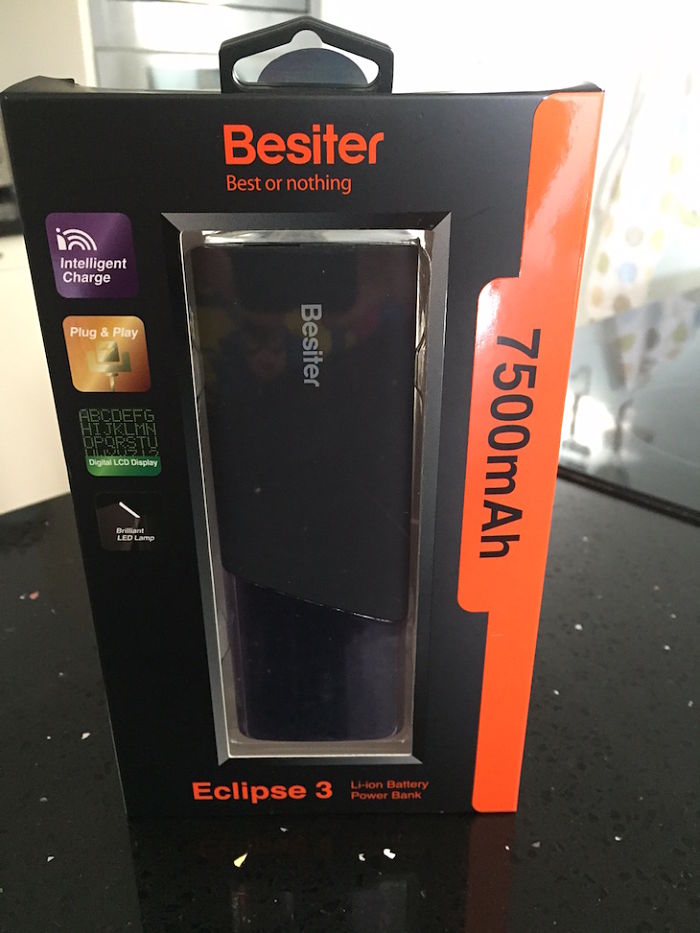 When I received the Besiter Eclipse (which comes in two colours – black and gun metal and white and silver), I thought it looked pretty nifty.

The design was stylish yet sophisticated with a dual colour combination, and it actually felt nice to hold.

Plus of course, it has a posh name…a brownie point right there.

According to the manufacturer (Kavson), the Besiter Eclipse offers ‘one of the most powerful batteries available’ and can charge an iPhone 6S up to five times and a Samsung Galaxy S7 up to three times over.

I only ever let my phone run completely out of battery once before recharging it with the Besiter Eclipse – and following that I charged it another 3 times (not from ‘dead’) without needing to recharge the powerbank itself. 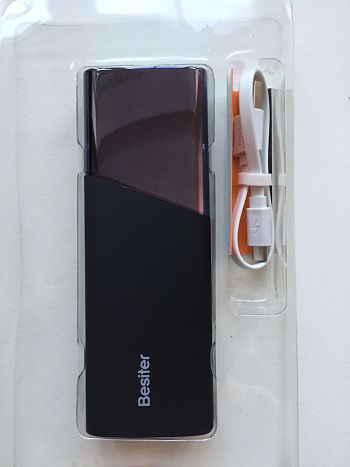 This is ideal if you’re on a short trip and you don’t want to worry about the hassle of carrying plugs and adapters with you.

It also has a maximum 2.1A output which means that devices such as tablets also charge incredibly fast.

So does it? Well of course I also tested this – I wouldn’t be doing my job otherwise would I? I’m pleased to say that this is absolutely true.

I plugged in VIP’s iPad mini, went to make a cuppa and when I came back it was already on 17% (from 0%). Pretty impressive.

Better still, I could even charge the Eclipse and my phone/iPad at the same time.

The other nice feature about it (which I didn’t think I’d actually have a need for) was a powerful LED light, concealed at one end.

I ended up taking the Besiter Eclipse to South Africa with me – and I certainly got use out of the torch when staying at Hilltop camp in Hluhluwe–Imfolozi Nature Reserve.

Pitch black in the middle of nowhere and trying to find our lodge would have meant it was the blind leading the blind had it not been for the torch illuminating our path. 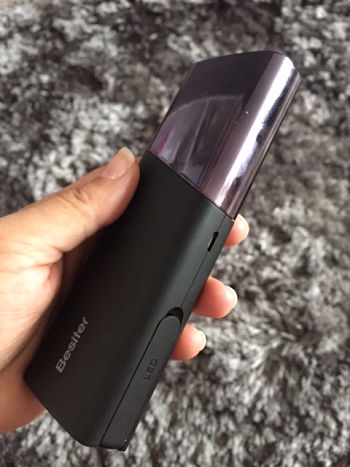 There are a couple of other nice touches about the Besiter Eclipse that are worthy of a mention.

First of all, the it has a gyroscope which senses when you pick it up and then displays how much charge is left inside. I like this. A lot.

Secondly, it doesn’t require any setup – you just plug a USB cable into the USB port of the Eclipse power bank and then your device starts charging – there’s no pressing any ‘On’ buttons etc. Again, less hassle.

And last but not least – and this is my absolute favourite feature of the Besiter Eclipse – instead of the digital display showing bars for how much charge is left, you get numbers.

And it’s human nature to have a bit of a fascination with numbers isn’t it? 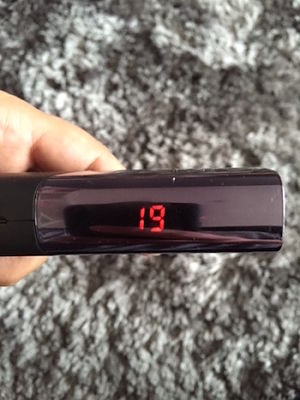 It’s a nice size, but for a small evening handbag, it could do with being smaller and thinner. But then again, couldn’t most things? Ahem.

But having experienced and tested the Besiter Eclipse as I did (quite religiously over the course of ten nights abroad), I would have guessed that the retail price was between £25-£30, especially with the extra features it carries.

Imagine my surprise (and delight) to find out it costs from just £9.99.

I’m thinking that this has got to be one little device that will be making its way into a few of my family’s stocking fillers this Christmas.

Brill review and a very handy gadget. Not gunna lie I love the price too! Perfect stocking filler

Thanks Georgia – the digital display is my favourite part!

This looks fab! My powerbanks never seem to stay charged so I’ve been on at Chris to find us new ones. Can’t believe what a good price it is! #snappedup

Powerbanks are a great thing to have – really useful as they fit in your bag easily. This one sounds great. Su #snappedup

Thanks Su – really pleased with mine and I use it every day still!

This looks great, I bought the teen a back up charger for his phone but it was quite big.Like you I get anxious if my phone power is running low. Really interested in this, will look it up.

Thanks Lorraine. I think this is a good compromise between the tiny portable chargers and the massive ones. Good idea for a teen pressie though eh?!

Adding this to my Christmas Gift list I think #snappedup

I’m thinking of getting one each for the kids for Xmas! They keep nicking mine!

Wow this is a great little gadget, and like you, I was expecting the price to be a crunch, but that’s an absolute bargain! This would be so useful for our family – thanks for the recommendation.

Thanks Cal – I use it all the time now – always in my handbag! ?