Until about three years ago, I loved flying. And, as a travel journalist (and a frequent flyer), that was a good thing.

But then I was involved in an unfortunate air incident – something that has affected me since and naturally, I developed a fear of flying.

And I'm not alone. Millions of people have flying phobias – real fears that disrupt travel plans and stop sufferers, and their families, enjoying the overseas holiday they would like.

So when Christopher Paul Jones, a therapist based in Harley Street who specialises in helping people let go of their fears, offered to debunk some of the myths associated with flying, I just had to publish them.

Hands up who thinks flying is unsafe.

Even those of us who do not have a phobia will probably raise our hands for this one. But when you’re told that the odds of you actually being involved in an accident when flying is one in eleven million, it might make you question why you are scared in the first place.

Myth 2: If a plane crashes it’s over.

In fact, you have a 95.7% chance of walking away from a plane crash.

This challenges the idea that so many of us have that suggests driving is so much safer because you can walk away from a car crash.

Myth 3: Plane crashes are common – I keep seeing it on the news.

You see them on the news because they are so rare that when they do happen, they make the front page. There are 100,000 flights per day, think about that in comparison to how many actual crashes you hear about.

Myth 4: It does happen to somebody.

Of course it does, things happen, but if you are going to use this junk logic then you’d need to worry about driving 220 times more than you would flying, and 5 times more about sleeping.

Myth 5: The airline companies aren’t affected if we crash.

Actually, the plane that you are flying in alone is worth around £100,000,000 and the compensation that an airline company would need to pay out would also cost millions.

Fact: Turbulence does not increase the odds of an aircraft accident.

For most of us, turbulence is simply annoying but for some it can bring on a real fear that the plane could be brought down. Actually, the worst you can expect from a bout of turbulence is spilling your in-flight refreshments.

Myth 7: Lightning can bring down a plane.

Fact: No modern plane has been brought down by lightening and modern planes are designed to withstand a lightning strike.

Myth 8: If an engine fails the plane will fall from the sky.

Fact: A plane is simply a big glider and planes can be flown and landed without an engine. And your pilot will have gone through rigorous training to land this big glider.

Myth 9: The wing of the plane might fall off.

Highly unlikely, actually. Wings are stress tested before a plane is even allowed to ever take flight.

Boeing conducted a ‘wing flex test’ that had the wings of a Boeing 787 flexed upwards by approximately 25 feet. This proved that the wings of a plane can handle even the most extreme forces.

Myth 10: Worrying keeps me in control and prepares me for the ‘what if’.

You cannot control everything and trying to do so creates stress. One in every 2.5 people has a heart attack because of stress and worry. You are actually more likely to die of a heart attack than from flying.

Once you look at a flying phobia in a rational way and realise that, actually, most of what we believe can be attributed to myth, it might be time to think about working on your phobia with a skilled therapist. Therapy can set you free from your fear of flying and change can happen quickly.

Stop being the one who misses out on overseas travel. Life is short, and there is a wonderful world out there waiting.

And for me personally? I've often considered therapy. In fact, one of the people involved in the same plane incident as me had therapy – and he says it has worked well overall for him.

Do you have any phobias? What are you fearful of?

A Pin For Your Self Help Board 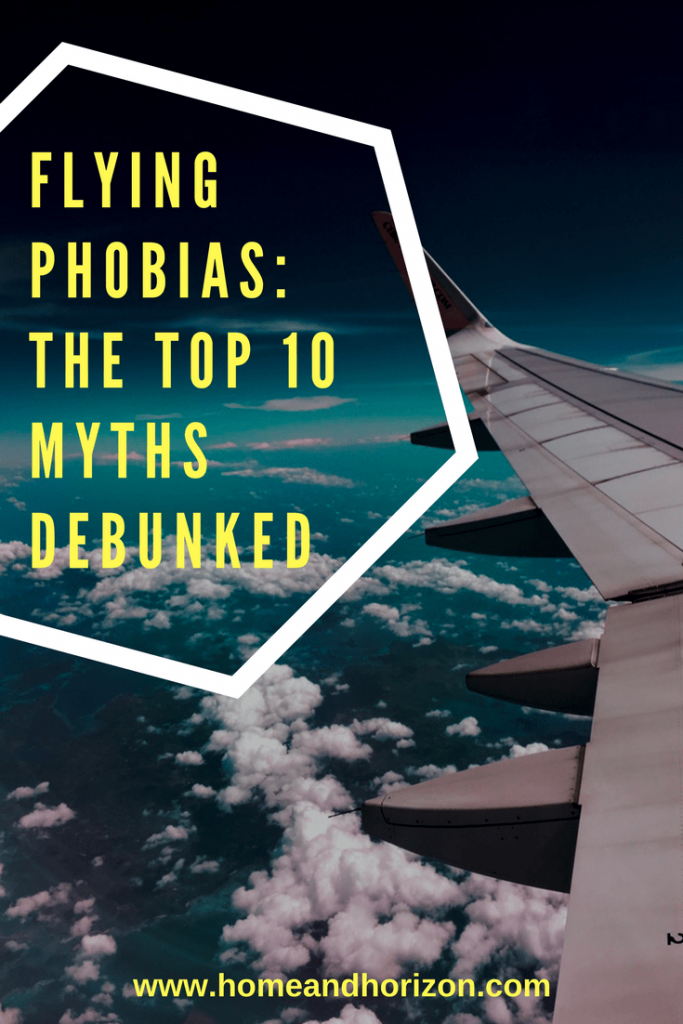 I love taking off and landing. The noise when the engine picks up right before take off is brilliant!

You’re much braver than me Emma – I used to embrace it and now i just try to ignore it’s happening!

I really don’t enjoy the take off and landing,although the actual flying part is ok. Reading this article made me realise how irrational my fears are.

That’s good to hear Hayley – hopefully you’ll feel better next time you have to fly!

I really dont like the take off and landing (the actual flying part is ok).I found this article very interesting and has made me realise how irrational my fears were.

I had a bad experience and haven’t flown in years. I’m missing out on so much of life and family events. Thanks for sharing.

Sounds like you could do with some extra help Lisa!

I think we have all believed some of these over time . I use to be a nervous wreck! Your not the only one xx

Wow – myth 2 was really surprising. I need to book us a holiday soon so we can fly I think!

Couldn’t agree more on this post. Actually, I somehow laugh to those myths while reading as I used to believe that as well when I am younger. Hahaha! Now that I am also travelling often, I have forgot about this myths already.

I think most of us have thought they might be true at some stage so you’re not the only one.

I wouldn’t say I was scared of flying, but if I allow myself to actually think about it then it does bother me.

I think that’s half the battle isn’t it …not thinking about it!

That’s great Kara – long may that continue for you…!

I used to love flying but since becoming a parent I worry a lot about it. This was really useful to read as we are flying soon and I have been feeling a tad anxious about it xx

Good to hear! It’ll be nice to get away from this miserable weather!….enjoy!

Luckily I don’t have flight phobia, but then again, the last flight I took was 10 years ago! My husband often flies for work, and really doesn’t like it. He is OK once above the clouds, but take off and landing really fills him with dread. Great informative post x

Thankfully I love flying I just don’t get much chance to do it!

The good news is airlines are reduced their airfares to compete with one another all the time – and apparently, long-haul is thenew short-haul!

Love this list. I have heard a few of these myths before.

This is a great list and puts it all into perspective. There are definitely other hazards out there that happen more and you have more chance of happening

Yes I’ve heard people are more likely to be involved in a car accident than a plane incident.. I was just one of the unlucky few – or lucky you could say as I’m still here!

A great and very rational List. I’ll show it to my mum and see if it helps her. She is terrified of flying x

She might need more than a few words to get over her fear though….wishing her lots of luck!