I went on a multi-generational trip to Walt Disney World in Florida; following on from Part 1 of our epic family adventure, here's Part 2 of what we got up to…

On days 1-3 of our Disney adventure we took a stroll down International Drive, visited Magic Kingdom and spent the day at Blizzard Beach water park.

The weather forecast predicted that day 4 was going to be a scorcher of a day, so we changed our plans to make sure we visited the other water park – Typhoon Lagoon – so that we could keep cool. Queuing for rides in sweltering heat wasn't our idea of fun on Day 4, but fun at the water park certainly was…

Today was supposed to be a ‘rest day’, but we decided to change our schedule as the weather predicted a scorcher of a day.

When it’s hot, you want to be near water so we decided to try the other water park at Disney World, Typhoon Lagoon.

We arrived at 8.30am and were the first ones there; they opened the first gates at 9.30am and then (quite frustratingly) we had to wait another half hour before they opened the second lot of gates near the beach area at 10am. What’s that about?

Honestly, you should have seen the stampede – it was ridiculous! People were running to get a good spot on the beach; put it this way, if you were in a wheelchair, under 10 years old or older than 50, you had no chance!

What they should have done is open all the gates at the same time instead of having you wait at the second lot of gates for another half hour – crazy.

Give us a Disney World wave!

One of our favourite things at Typhoon Lagoon was the huge wave in the pool. Before it appeared there was a huge loud bang – a pre-warning if you like – and people would scream as the huge wave hurtled towards us – it was such good fun!

When the wave hit, it hit with such force that it would tumble you around under the water. The kids were in their element and so was I!

Sometimes you'd get a foot in the face or a bang on the head as someone was washed over you, but it was all good fun and there were no serious injuries.

Other rides we went on included Humunga Kowabunga, an almost vertical slide with a drop in the dark. My backside got absolutely pummeled on that one! Not sure if it did much for the cellulite though!

We also went on another slide in the dark (from the set of three slides, the middle one was the dark one), and a family river raft, which considering we queued for what seemed like ages, the ride was over in about 10 seconds.

We left the water park at about 2.15pm that day. The temp was 95-degrees Fahrenheit and we decided to head to Disney Springs ( a quick 5 minute bus journey away) to have a brief look round before we got the Lynx bus 50, then the number 8 back to International Drive.

For some reason that day I was really tired. I think catching the sun had a lot to do with it, as well as exerting all that energy on running round and going on the water rides.

So, in the evening, while the kids went for a late night swim I got an early night – and didn’t wake again until the next morning….I must have needed it!

On Day 5 we visited Animal Kingdom, which is apparently the largest theme park in the world covering 580 acres.

This was perhaps one of my favourite Disney World parks despite being the fifth most popular park out of the Disney parks.

Once inside, we headed to the safari in Africa land. Our first fast pass wasn't until 11.15am and, having done our research, we knew it was popular attraction.

I'm so glad we did – we saw so many animals including lions, zebra, giraffe, gnu, elephants, water hogs, rhino… you name it, we saw it!

If you do one thing in Animal Kingdom, DO THE SAFARI! 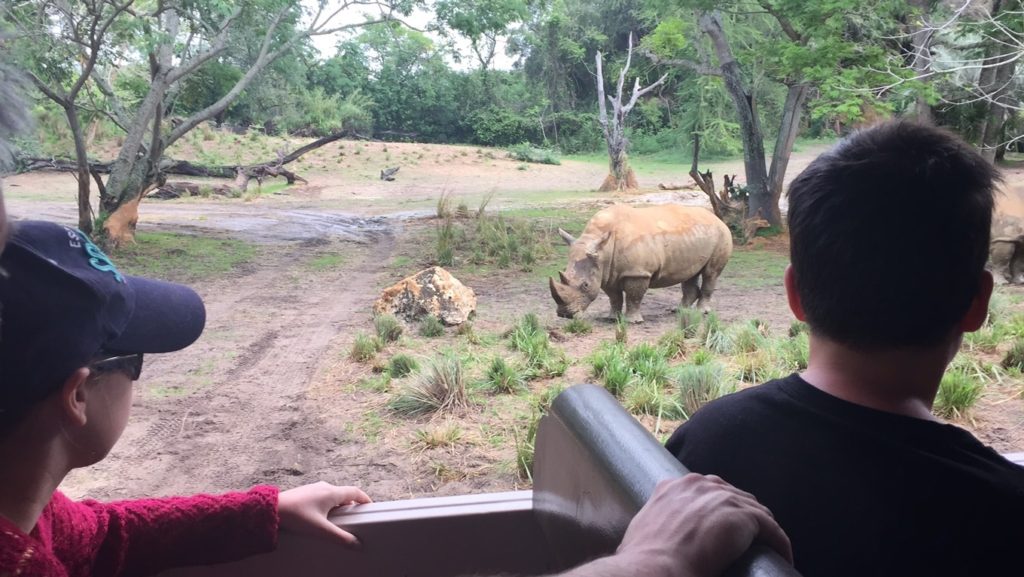 After the safari (and at the recommendation of our safari guide), we headed to Gorilla Falls to see – yes you've guessed it, gorillas!

Then it was time for our first fast pass at It's Tough To Be A Bug, which was a 4D attraction. The kids enjoyed it and it gave us the chance to rest and sit down for 10 minutes.

By the time the show was over it was time for lunch so we headed for ‘Asia' land to find some shaded picnic tables.

Once refreshed, we decided to take on the Kali Rapids, where we all sat in a large circular raft and went down the rapids. It was great fun and I got totally drenched: luckily the sun came out!

As we were walking along we spotted ‘Maharajah Jungle Trek' where we could see monkeys, tigers and reptiles. Again – well worth a visit.

Then we decided to treat ourselves with a $5 ice-cream (just under £5!) as the sun was cooking us and we needed time to cool down. 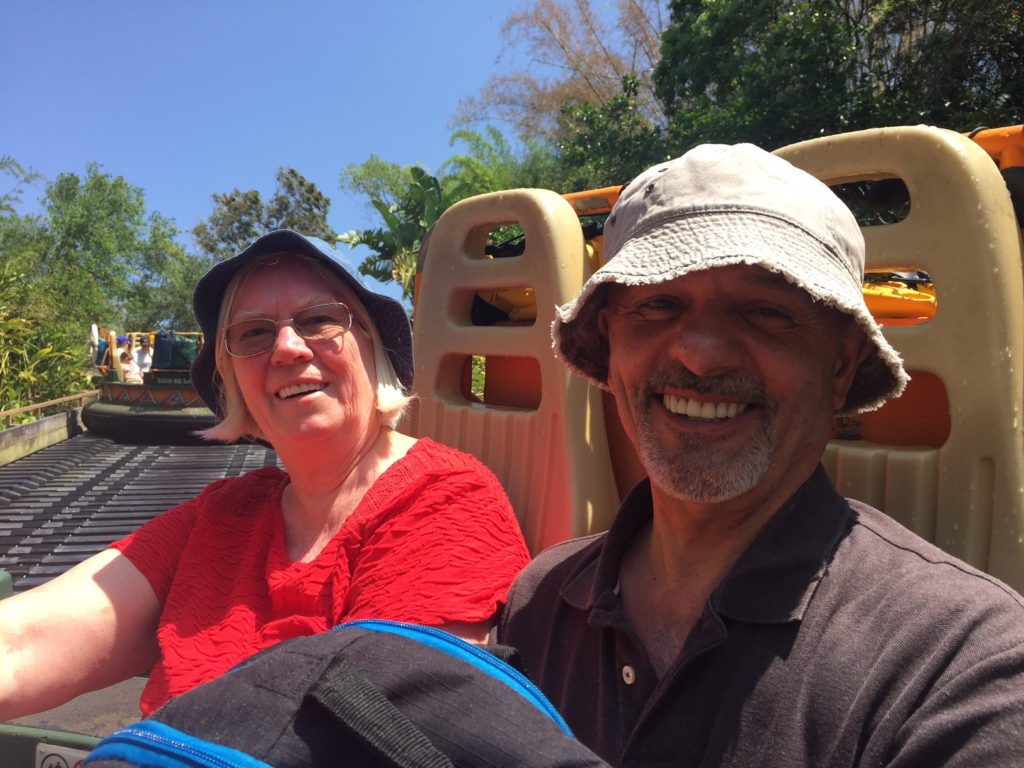 Granny Mac Ma and Ata on the Kali Rapids

Our second fast pass of the day was Dinosaur, a carriage ride that rocked you from side to side and, if I'm honest, it made me feel a bit sick.

The kids loved it though and used the grandparents' fast passes to go back on it again.

Finally, we used our last fast pass of the day on Expedition Everest. This was my favourite ride of the day – a super fast rollercoaster which (in parts) travelled backwards and through the dark. We even managed to convince the grandparents to join us!

When we got off the ride it was about 3.30pm so we decided it was time to head back to the hotel. Good job we did as it took us just under two and a half hours to get back!

After some food and refreshments, mum and I decided to head to a large Walmart store to pick up some bits for the following day – and to see if they had any goodies we could pick up.

On our first full day in Orlando (see Part 1 of the Disney World Diaries) I mentioned that we went for a walk along Interntand came across an Upside Down house.

This happened to be something called WonderWorks, an attraction with 100+ hands-on science exhibits as well as laser tag, a ropes course and a 4D motion ride. 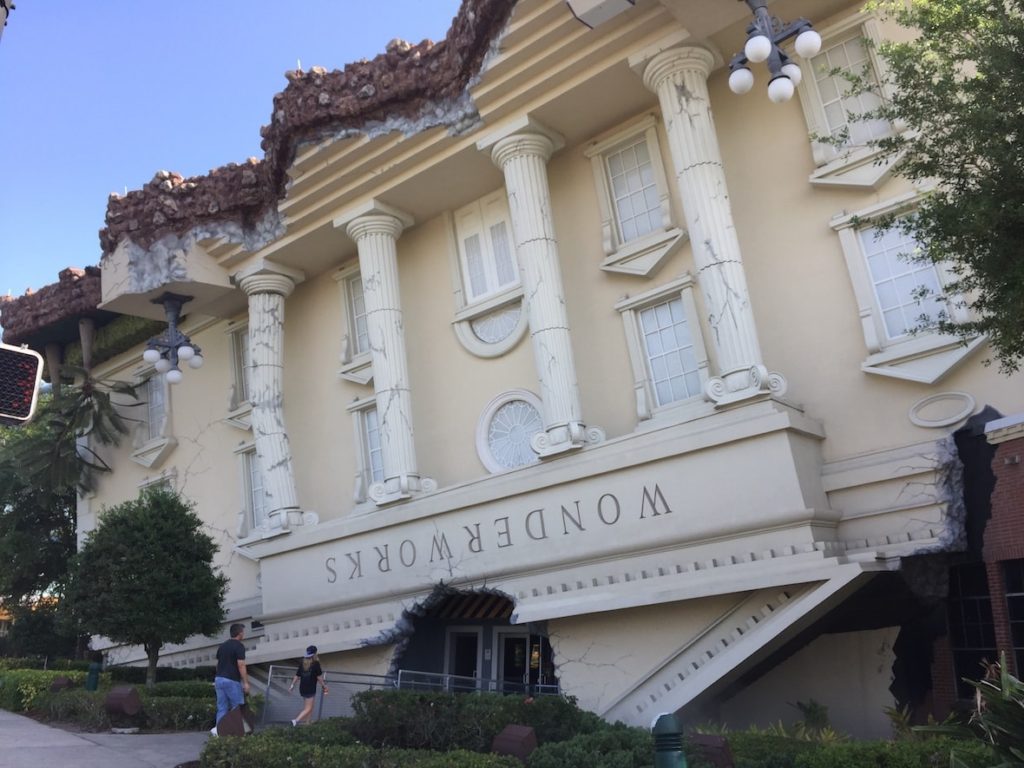 The WonderWorks upside down house!

Visitors also got a stamp on their hand which meant that you could leave the attraction (for lunch for example) and return as many times as you liked up until midnight the same day.

Each person also received one free token for the laser tag (you could purchase more if required).

The highlights for the kids were the high wires (an indoor climbing section), the rollercoaster simulator, laser tag and astronaut training challenge.

While the kids were enjoying WonderWorks, Granny Mac Ma and I ended up shopping at Walmart.

The day hadn’t started well if I’m honest. We had tried to get to a factory outlet, which is apparently cheaper than a designer outlet, but endured a three-hour wasted round-trip. This is because no public transport takes you to any outlets – you need to hire a car yourself or grab a taxi or Uber.

Since we didn’t have a car and an Uber would have been too expensive (it was quite a long way away), we ended up in Walmart and a shop called The Dollar Tree.

Despite the fact that it wasn’t where we initially set our sights on going, I got some good buys – sweets, chocolate and lip balms from The Dollar Tree and some clothes (mostly Wonder Woman tops!), crisps and some Reeses Chocolate Eggs for VIP – which haven’t yet made the UK supermarket shelves, but are due to according to VIP – in Walmart.

In fact, I made a video of our mini Florida haul and I’m joined by the beautiful Girlwrighter who showcases her lovely gems.

By the time we got back to the hotel it was gone 3pm so we had a cuppa and then a quick rest before heading to Miller’s Ale House – probably our favourite restaurant we’ve tried since being here. I had half a rack of ribs and fries and it was delish.

Then we thought we'd take a long walk to see some more sights and came across a huge big ferris wheel, which is taller (by a matter of metres) than the London Eye! It was illuminated in blue and looked lovely.

There was plenty going on around the ferris wheel area with an atmospheric buzz, fuelled no doubt by the plentiful cafes, bars and restaurants.

On the walk back we found a restaurant called Friendly’s, which served up great ice-cream; I chose a chocolate chip cookie dough with hot fudge sauce which I know I wouldn’t have tired of if I ate it every day!

Then it was back to the hotel to get our heads down ready for another long day tomorrow…. 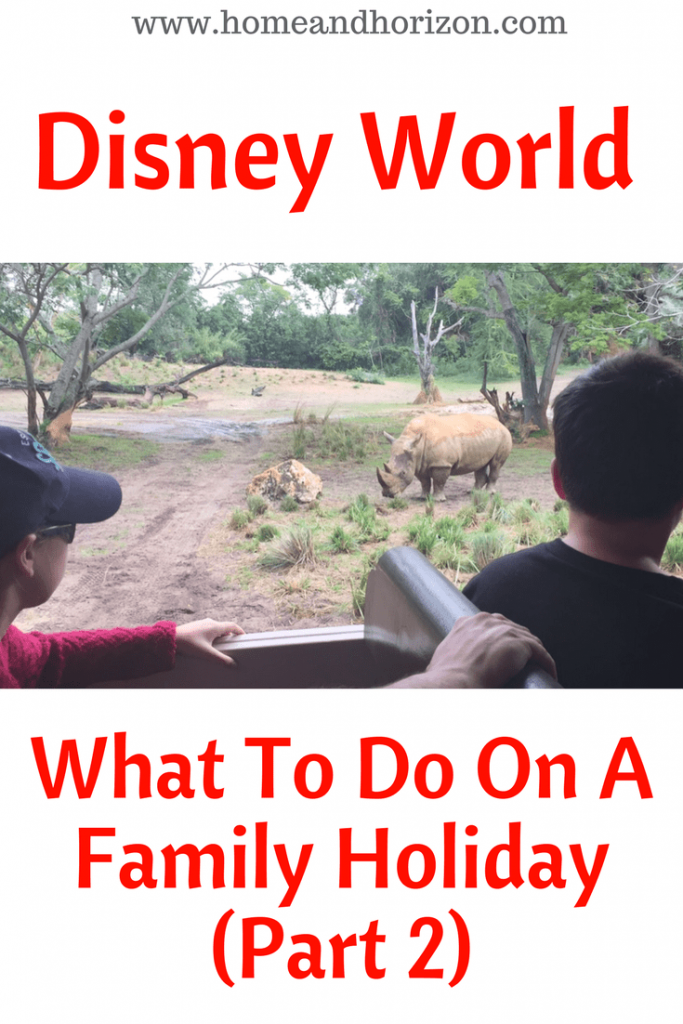 I’m so jealous..I really want to go and take my son too.
Tamsin recently posted…Brave Botanicals By Faith In Nature Review

I’m sure you will one day Tamsin (get saving!)

I really need to go to Florida soon. It always looks so amazing! That upside down building looks insane!

It’s great to look at isn’t it? I’m surprised there are not more accidents on the road with people craning their necks to get a good look at it!

This looks like a perfect day out! Safari sounds amazing.

Loving your Florida diaries, it brings back lots of happy memories! I think Animal Kingdom is one of my favourite parks. I love expedition Everest and the Lion King show is absolutely phenomenal!

Thanks Caroline – I loved Animal Kingdom! I could have gone back there to see more things!

Crazy that people rush for the beach, haha, I can just picture it now. The safari sounded amazing. I would most definetly have to do that.

The safari was definitely a highlight of the day! I got a video of the people rushing too….crazy! You get caught up in it as well!

I’m going to Orlando very soon. It will be my 6th time I think. Did you just miss the opening of pandora at Animal Kingdom? I can’t edit to see this land it looks amazing

I think we might have missed the opening, but even with two weeks there you just don’t get to see everything do you? That’s one of the reasons people return I guess!

Ever since I was a little kid I always dreamed of going to Florida, it has been a dream of mine. I like the sound of the Safari

If you’re a big kid at heart Ana then you’ll love it!

I love those poo emoji’s you bought – too cute!

They’re so funny aren’t they?!

I would LOVE to go to Disney World with my children! Typhoon Lagoon sounds amazing, I’m a sucker for water parks!

Thanks Sarah – the kids went back to the water park because they loved it so much. I think we need a water park holiday next!

I SO want to go back! I am lucky enough to have visited three times and am planning another holiday in four years 🙂 Kaz x