Cyprus: an all-in-one destination for all ages!

I’ve long felt a close affinity with Cyprus – even when a warm welcome wasn’t exactly received when I visited the tiny island back in 1993.

But that didn’t stop me from returning and I’ve since visited twice more, each visit vastly different from the others. And that’s one of the beauties of this destination: it really does offer something for everyone  – an ‘all-in-one’ destination if you like!

Going back to the beginning, my first visit to the ‘Island of Love’ was with my then boyfriend who I’d been dating for a while.

I’m not sure why we chose Cyprus as a holiday destination back in 1993; perhaps it was the favourable exchange rate or maybe, just maybe it was the romantic in me picking a destination that is famous for Aphrodite’s Rock – the goddess of love, beauty and fertility….who knows?

What I do know is that (a) we encountered a very memorable arrival at the airport and (2) Aphrodite’s powers clearly didn’t do much for our relationship as we separated a few years later.

The thing that I recall most from my first visit to Cyprus was being led away at the airport as they suspected I might be a spy of some sort. Well, that’s the conclusion I came to anyway.

You see, I’m half Turkish and with a dozen Turkish stamps in my passport over the last eight or so years, back in 1993 they questioned why I would want to visit Cyprus. I was led away to be interviewed in one room and my boyfriend was led into a separate room.

As you can imagine, I was absolutely bricking myself. And as I sat in the room waiting to be cross-examined all sorts of visions popped into my head, including one of myself in a cell wondering how I got there!

I managed to calm myself down enough to answer their questions of why I was there, who my father was, how long I was staying there, what my plans were, what my second cousins were called and who my best friend was at primary school.

Okay, so maybe not the last two, but once they were satisfied that I wasn’t reporting back on anything I saw, touched, smelt, heard or tasted, to the Turkish government, I was free to go.

It ended up being a nice holiday from what I recall. We did try getting ourselves into the north of Cyprus to see what it was like, but the soldiers told us to do one when we arrived at the checkpoint town of Famagusta. And that was that. 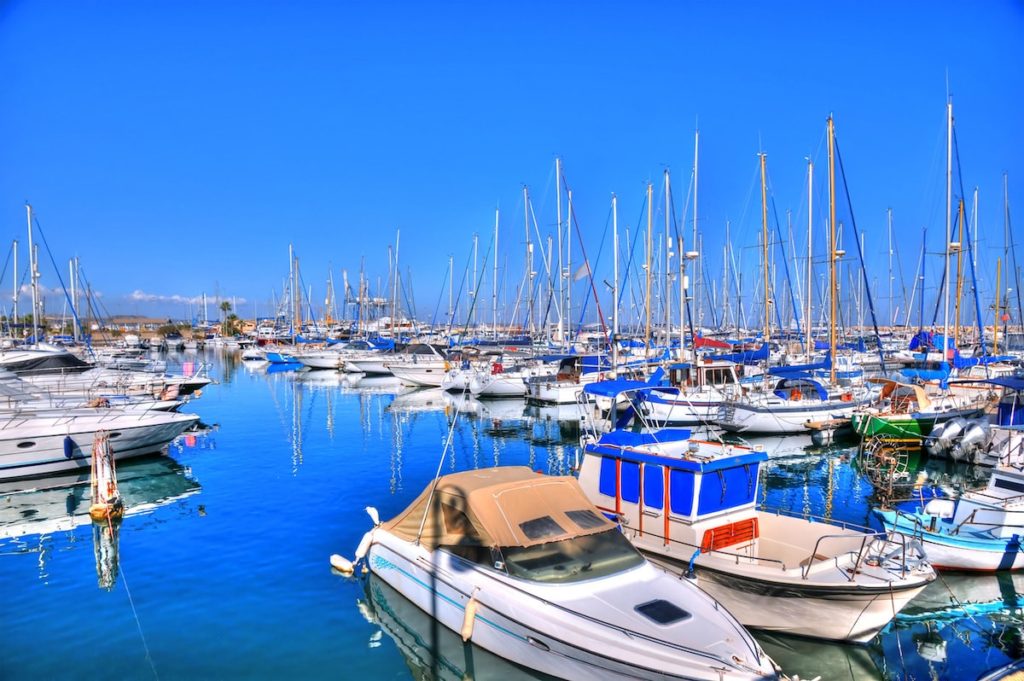 Visit 2: A girly knees up

Some ten years later and, as it turns out, still single, my bestie (Pam) and I decided we needed a well-deserved holiday in the sun.

Cyprus seemed to be calling me; it was relatively cheap, cars drove on the left (a huge plus point) and it was such a small island, we couldn’t possibly get lost. Plus most of the men seemed easy on the eye. Well, I was single remember.

Pam and I were only there for a week, but we seemed to have squeezed in two weeks’ worth of activities into just seven days. We ended up staying in two places – Limassol and Agia Napa – the latter of which was an ideal party hotspot for us to let our hair down.

My strongest memory on that holiday was meeting a lothario who bred stallions. He tried it on with both of us (obvs), but because he loved himself in more ways than one, we didn’t succumb to his advances. I think he respected us for that and we ended up making firm friends.

So much so that we met his friends, his family and hung out with him most evenings playing cards. One day he took us to his farm to meet the stallions and watch the tiny kittens running round the farmyard. At the time, I remember wondering how many kittens had managed to do themselves a mischief by getting under the hoof of one of the mighty stallions.

And boy, did we let our hair down on that holiday. I don’t think I’ve ever felt as liberated as I did back then. We had such a blast and, living by the mantra ‘what happens in Cyprus, stays in Cyprus’, further cemented mine and Pam’s friendship. Happy times. 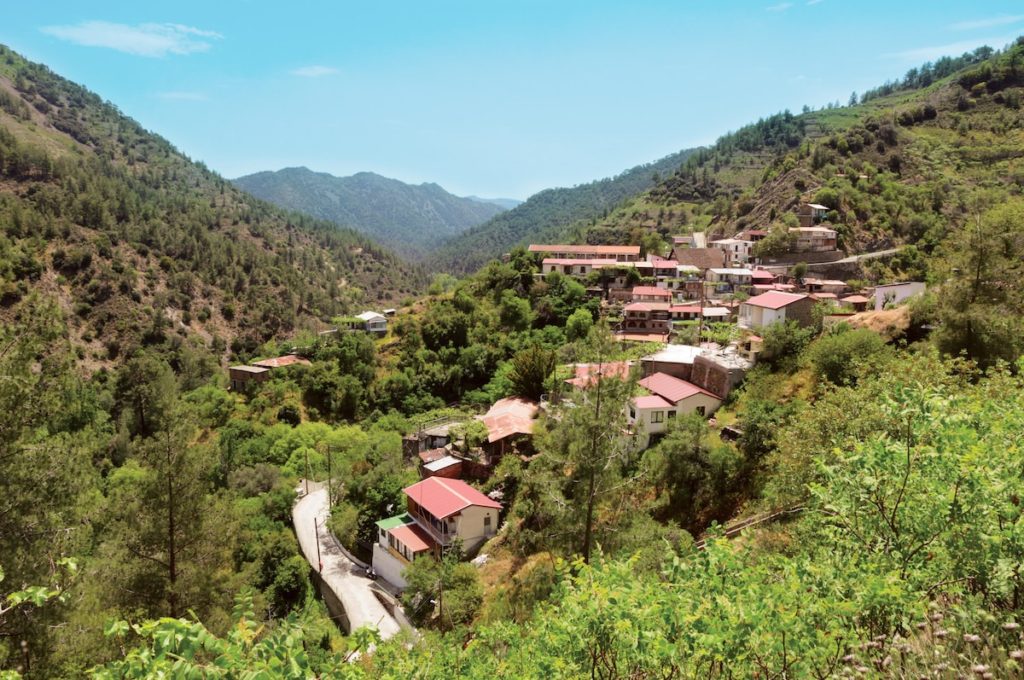 Villages are dotted throughout the Troodos mountains

Fast-forward to 2011 and my husband and I were looking for a family-friendly destination; our kids were quite a handful – they needed constant entertaining and plenty of activities to keep them busy.

I remembered interviewing the UK director of the Cyprus Tourism Organisation (part of my day job), and his words struck a chord with me: “In the morning you can be skiing in the Troodos mountains and enjoying an alpine setting and within a matter of hours you can be sunbathing on the beach.”

And he was right of course. At the top of the Troodos Mountains is a ski centre and visitors can also partake in the sport on Mount Olympus (1,951m) – usually between January and March.

But Cyprus as a whole offers fantastic year-round weather, along with stunning landscapes, friendly locals and delicious cuisine, to name but a few.

It’s certainly a land of variety and a land of contrasts – and this was the deciding factor for returning to Cyprus with a five-year old and three-year old in tow.

This time though, I made sure I did my research; we wanted to make the most of all the activities we could (we’re quite an adventurous family if you haven’t already guessed).

So we hired a car to get ourselves around. This was a huge advantage – and hiring a car is highly recommended, especially as pretty much all the road signs are in English. And it just means that you can take yourself off on a whim exploring. 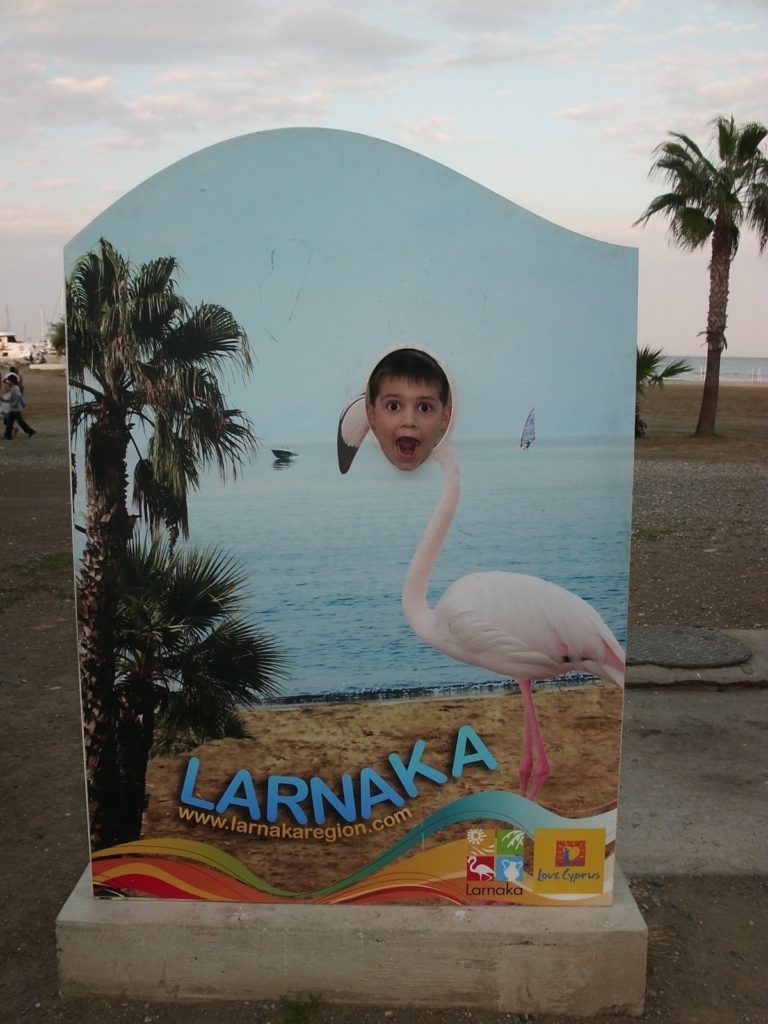 Parks are plentiful for the kids to enjoy

And that’s what we’d frequently do. At the time of our holiday, it was Easter and one day we found ourselves driving up the mountains to visit some of the pretty little villages.

As we came to one there were celebrations going on, with entertainers, music and dancing. It was impromptu moments like this that really took the holiday from being good to being great.

A few days were also spent on the beach (naturally) and one day we drove to the Camel Park in Mazotos, which the kids loved as they got to ride a camel. The attraction also has other facilities such as a swimming pool (bring your cossie!), a kids’ play area and other animals to see.

Another favourite was the WaterWorld Themed Waterpark in Agia Napa. We ended up staying most of the day of course, which worked in our favour as it tired the kids out.

And I finally got to check out north Cyprus on an escorted tour for the day. Our itinerary took us to the pretty town of Kyrenia and its marina, as well as another small village to visit a church, have lunch and then back to Kyrenia to visit its castle. 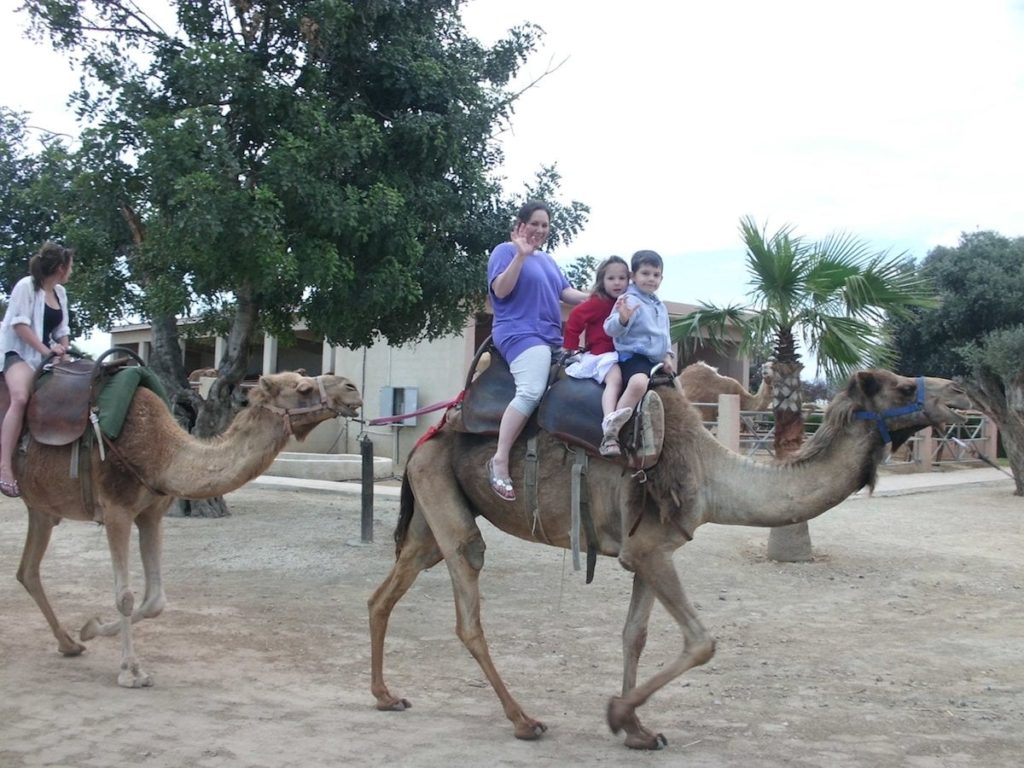 At the Camel Park

Back in the South and one day we passed a place called Salt Lake near the airport, which was packed with flocks of pink flamingos (typical around spring). It was such a beautiful sight to see – and the kids were mesmerized by them.

We stayed at the Palm Beach Hotel in Larnaca, which offered an ideal family-friendly complex complete with a kids’ club, swimming pools and lemon trees (perfect for our gin & tonics in the evening!), but Cyprus has a plethora of accommodation options to suit all needs – from B&Bs and apartments, to villas and luxury five-star establishments. 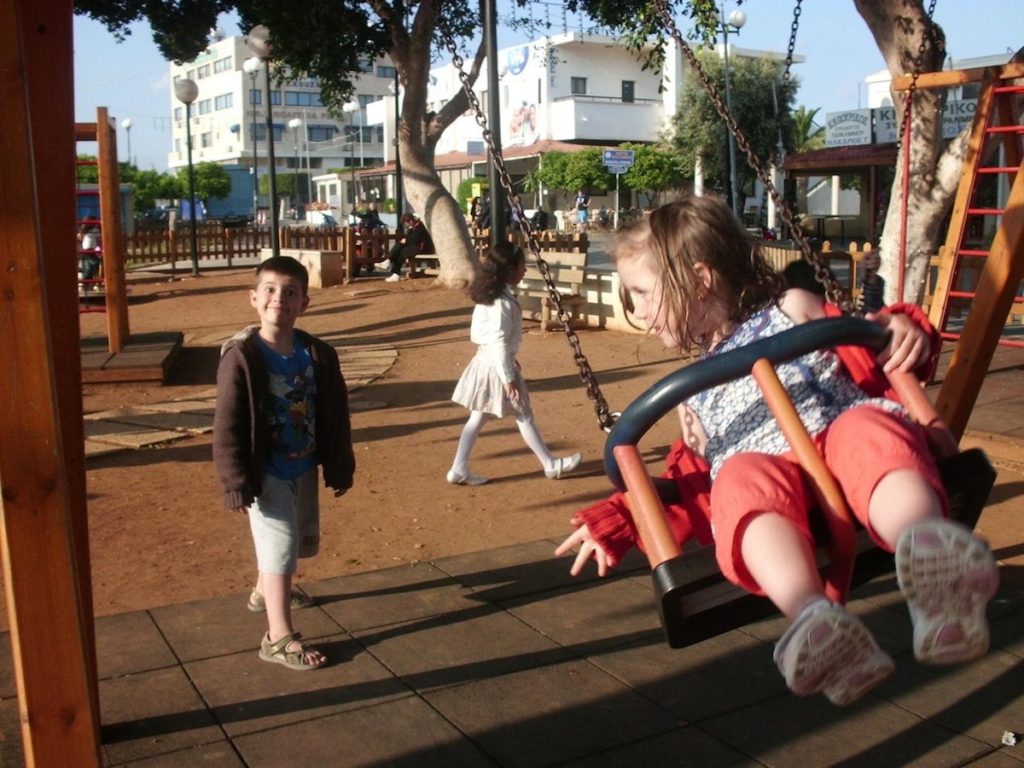 Parks are plentiful for the kids to enjoy

There’s no doubt that if you’re looking for a short break with a variety of things to do, Cyprus’ rich history and culture makes it a great destination. Paphos is also the 2017 European Capital of Culture and there has been a huge programme of events throughout this year to celebrate.

If you’re seeking a relaxing break (maybe the kids are a bit older?), then Cyprus’ beaches are plentiful and are definitely worth exploring.

And for adventure-seekers and activity enthusiasts, there’s plenty of opportunity to keep busy – from nature trails, jeep safaris and diving, to climbing, cycling and boat trips – and that’s just for starters.

And don’t just take my word for it; the Cyprus Tourism Organisation has confirmed that 2017 is on track to be its most successful year on record in terms of global tourist arrivals. I guess the only question you need to ask yourself is what type of traveller are you?

Looks like good news spreads fast then – Cyprus really is an island to suit all tastes – and all ages.

*This is a collaborative post with James Villa Holidays who asked me to write an honest opinion of my adventures in Cyprus – I hope you enjoyed it! 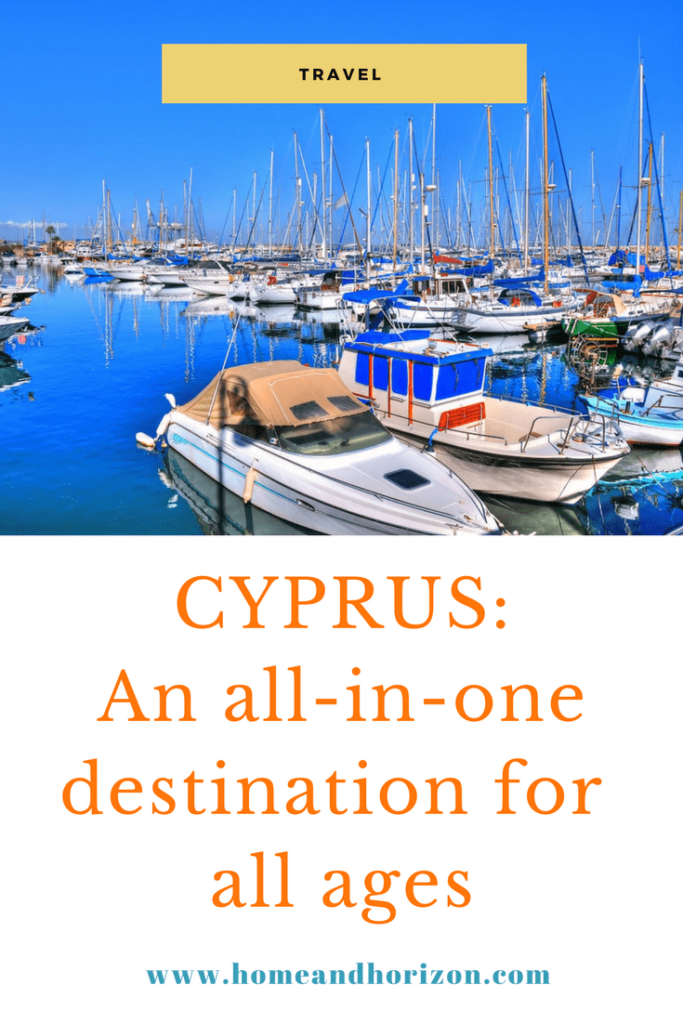 I think you’d enjoy it if you did Jeanette – and then once you go, you will want to do it again and again….

Thank your for your great article for our country! 🙂

I didn’t know you are part Turkish! Glad the first experience of Cyprus didn’t put you off, it looks like a beautiful destination with something for the whole family.

Thanks Laura – I’d go back a fourth time soon if it wasn’t for the fact we like exploring new destinations! It’s definitely a great destination for kids of all ages.

I really want to visit Cyprus one day, my friend has been a few times and loved it

Cyprus sounds lovely, I’ve never really thought about visiting but I might have to re-think that now.

I’ve never been to Cyprus, but I never realised how much there was to do! Now I really want to visit!
Elodie recently posted…How to Spend 48 Hours in Marseille

It’s amazing what you can do on a small island isn’t it?

Thanks Elodie – I’m sure you’d like it if you manage to get there!

I’ve never been to Cyprus but am always on the look out for family friendly destinations and it certainly looks like one!

Thanks Laura – it’s one of the best family-friendly destinations I’ve visited for sure.

I adore Cyprus, we had friends who lived out there and we very nearly moved there ten years ago. It’s such a beautiful island with everything you need, looking forward to taking my son when he’s a bit older!

Ooh a fan like me! I’m sure your son would love it!

Like you we adore Cyprus and have been back many times.I love the trip to the Troodos mountains, visiting the ruins at Paphos and enjoying the beach at Fig Tree bay in Protaras. I would definitely return again.

That’s great Nayna – I think once you’ve been to Cyprus – you get the bug to return time and time again!

Thanks Sarah – I’m sure once you visit you’ll be glad you did!

I loved Cyprus for its amazing weather and food! I love holidays where I can mix relaxation with some cultural sightseeing

I’ve never been to Cyprus, but it certainly sounds like a beautiful place. I’d love to find a place with lots of activities for my boisterous boys, so this sounds really good.

I’m You and your boys would love it I’m sure! Lots to see and do 🙂