As much as I’m thrilled with my latest bargain home buy purchase, it’s actually tinged with a bit of sadness.

You see, this large glass jar was purchased from BHS (British Home Stores), which has now gone into administration and will shortly be closing down – within the next few weeks I’m told.

As such, it’s sales galore as everything has been reduced, which is great of course, but I’ll be very sorry to see this much-loved store go.

I felt the same way about Woolworths when it disappeared from the High Street in 2008.

I was frequently found in the sweet aisle when I was a kid (and as an adult if I’m honest), filling up a bag with pic ‘n’ mix sweets.

In fact, I distinctly remember reading in the paper that the store manager of the Petts Wood branch (where we lived at the time) sold the very last bag of sweets on eBay and it sold for £14,500! (Read the story) 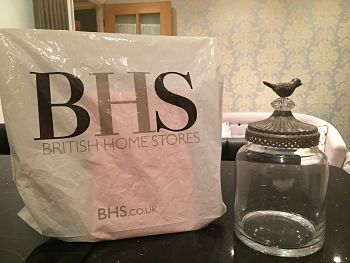 Now why didn’t I think of that?! Mmmmh… perhaps I’ll claim to have bought the very last lampshade from BHS and see if that brings me in some notes.

Anyway, the good news is that he ended up raising money for charity, so that was a nice ending to that story.

So back to BHS; the glass jar was originally £12 and was reduced to £9.60 – not a huge discount but it’s something that I probably would have bought at full price anyway.

I’ve been looking for a large glass jar for my new ensuite, so that I can decant some bath bombs/soaps into it.

And best of all, this one had a grey lid to match my grey bathroom tiles. 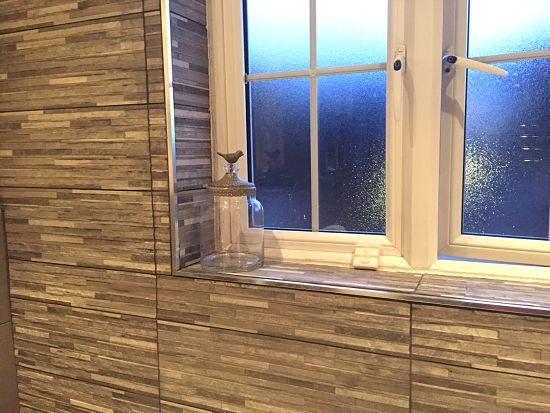 Many of the discounts were 50% off when I went in this week, with a lot of the latest bedding reduced by 20%.

Although most of the shelves were bare when I went in, I have a feeling that goods will be reduced right up until the shop closes.

I did ask what date that would be, but none of the staff knew. Something that did make me smile while I was there was a man at the till who was asking why the shop was closing (he evidently doesn’t watch or read the news).

Quick as a flash, the girl behind the counter retorted “Because we had a crap boss.”

Now, wouldn’t it be nice if we could always speak so honestly and openly about our places of work – and our bosses?!

Ah BHs 🙁 I was so sad to see the closing down signs on Saturday when I went passed. I have a light in my bedroom from there it was one of the hidden interior gems of the high street so sad to see it go! And a lovely addition to your home X

Ah thank you. It will be sad to say goodbye – I wish they were going online instead of disappearing forever….