The £2 A Day Feed My Family Frugal Challenge

Voucherbox got in touch to ask if I’d like to take on their #2poundchallenge, which basically challenged me to feed my family for a frugal £2 a day per head.

The voucher publisher teamed up with UK-based charity Zamcog to raise awareness of the fact that it costs £2 to feed and educate a child in Zambia every day.

And, in an effort to change the way we think about food, Zamcog challenged the blogging community to cut down on their food spending and waste for one day – and write about their experience.

For every blog post documenting the challenge, Voucherbox would donate money to the charity.

So I had to ask myself one question: could I be super frugal for the day AND convince the family to take part in the name of a good cause? Absolutely!

My first thought about the challenge was ‘This is going to be a cinch!’ I'm a pretty thrifty person anyway and as my kids have become older, they're a little less fussy about what they eat.

However, not only was I signing myself up for the thrift challenge, it suddenly dawned on me that I also had to bear in mind that I'm on the Slimming World plan and, for me, one little cheat would mean a ride on the slippery slope to piling on the pounds again.

So I had to give this some serious thought. This would mean a frugal challenge that EVERYONE in our family could stick to – and a sensible plan that wouldn’t steer me off the Slimming World plan.

I also wanted to be creative, but sadly my creativity as a cook extends to buying a microwave meal and sticking something on top of it (cheese) or dressing it up with a salad. Yes, really.

So I consulted VIP, the master chef of the household – and someone who is great at cooking meals and being versatile.

As we were doing this challenge at the weekend, we had the luxury of time on our side, which mean that the kids didn’t have to be sent to school with a packed lunch. Instead, we could take our time to shop around to get the best prices for our frugal day – and make some wholesome meals too.

After a few days pondering what we could have, which involved doing all the calculations with how much things cost and how much to buy to feed the four of us (that’s 12 plates of meals in total for just £8!), here's what we decided on:

Everyone in our family likes omelettes, so omelettes it is. Actually, my youngest doesn’t like eggs, but she seems to accept them as an omelette (maybe she hasn’t yet worked out that omlettes are made of eggs…?!) 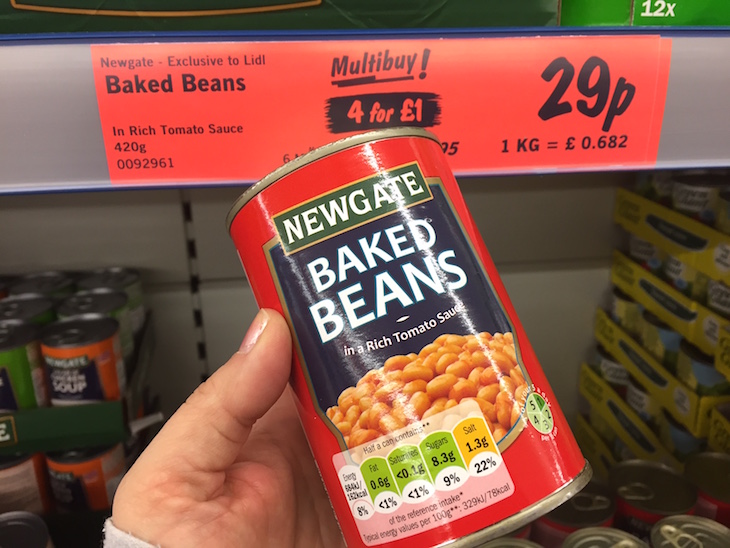 Fortunately the kids had got used to having baked potatoes as a canteen lunch choice at school, so it was an easy choice – this, mixed with baked beans.

And from Lidl we bought Newgate baked beans 29p 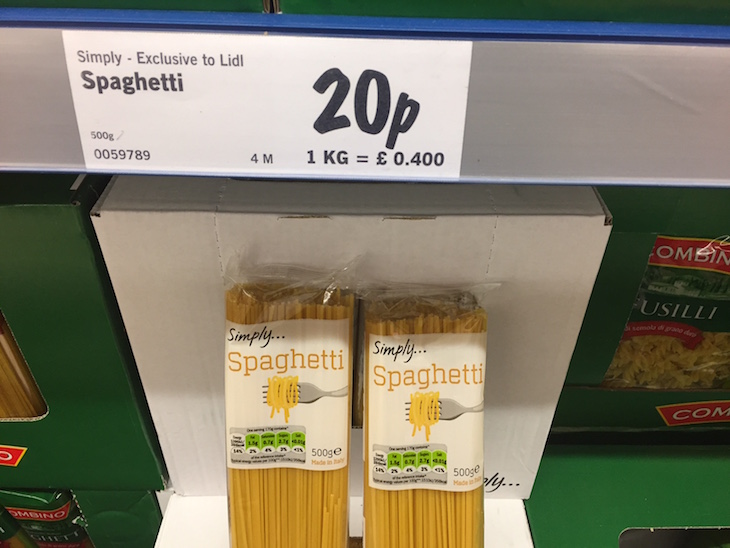 Dinner needed to be warm as the temperature (at the time of taking the challenge) was freezing! Everyone in the household liked spaghetti bolognese and it worked with my Slimming World plan a treat.

We also used the onions we purchased for breakfast and found a clove a garlic in the cupboard to add a bit of flavour.

The Grand total of all our meals came to….(cue drum role)…

AND….check this out (she writes with a huge beaming smile) we even had change – 15p!

So how was it?

Once I’d explained to the kids what we were doing and why, they were up for the challenge – I think it helped when I told them it would give them bragging rights at school!

Throughout the day I kept praising the kids to tell them how well they were doing – and when they were peckish in between meals I improvised with the ingredients purchased. For example, I cut the carrots into small sticks for them to nibble on.

In fact, this would be one of my top tips if you’re doing something similar, this along with drinking lots of fluids!

I have to admit, it was a tough challenge. A couple of times I caught myself absent-mindedly reaching for a yoghurt or boiled sweets and I had to stop myself. 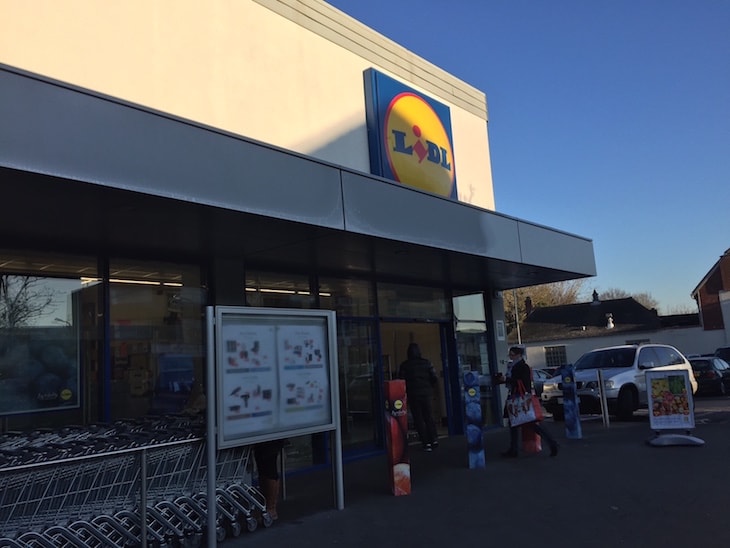 But all in all, it was mission accomplished and I felt quite smug about getting through the day without any major hiccups.

In fact, if I’m honest I’d even go as far to say that it’s been a bit of a learning curve for all of us, highlighting how much food we really do waste – as well as questioning whether we really need that bag of crisps in between meals.

And if the new us means a more frugal family, that can’t be a bad thing.

* This was a collaborative post, but in support of this initiative I have chosen to support Zamcog by donating my fee.

I found this an interesting read. We are on a very limited budget and I find it a challenge not to fill up on cheap carbs but to make sure we get enough protein and greens. We make a point of always looking in the discounted section at the supermarket – they mark stuff down in the evening if it is reaching its “best before” date. Today I got a bag of 8 uncooked beetroot for 50p! I’m planning to make a lovely soup with them so that’s one lunch sorted.

That’s great Fiona – sounds like you’re really thrifty when it comes to making the most of the supermarket discounts.

I know I’m late to the party here, but this was a really interesting read. Well done with this, nutritious and tasty sounding.

Thanks Judith – it’s a post that is relevant at any time really.

Thank you for your post! We will be donating £50 to Zamcog which will feed, educate and clothe an at-risk child in Zambia for 1 month.

You did so well – I’m not sure we could manage as I need gluten free and that’s mega expensive! Plus my growing boys seem to eat non-stop from the minute they get in from school, and their school dinners alone are £2 per day! So well done team Wright!

Ah thanks – I’m not going to lie, it was tough!

That’s awesome meal planning, I love using fresh produce and the OH can’t believe how much I have saved over the last months meal planning and shopping in Aldi
Lisa Lambert (mumdadplus4) recently posted…Don’t Rock The Boat by University Games Review and Competition

Good job! I have to admit that my wife is the best food shopper I know of. She plans meals and saves a fortune. Me? I’m rubbish. A terrible impulse buyer!

That’s really amazing, well done for raising awareness. I always thought that eating healthy while on a budget is impossible glad to be proven wrong. x

We recently did this too and thankfully we survived it, ha! My kids moaned a bit about the lack of pudding and treats, but it was really important to realise how much money we waste on food each week!

Well done to all of you, I bet the kids were missing their sweet treats that day.

Thanks Lynne – we made sure we didn’t choose Saturdau night treat night!

Ha ha! They certainly were!

That’s a brilliant challenge, and inspiring too! Well done for managing to do it with change to spare 🙂

Such a tough challenge but well done for doing it and hey dinner even sounded appetizing. Its great you and other bloggers are raising awareness!

Thanks Ana – dinner was lovely in fact!

I love this. It just goes to prove that actually you can eat healthy on a budget. People use so many excuses for not eating healthily and say healthy food is expensive. Ha…..they should be reading this post. Well done you !!

Thanks very much Renna! Glad to have inspired 🙂

You’ve done really well I took part in the challenge too it definitely gets you thinking about what eat.

That’s great Joanna – how did it go for you? Have you got a blog post I can read?

Well done! That’s really inspired me. I am so angry with myself as I had to throw out an unopened bag of pak choi this morning. I had completely forgotten about it at the back of the veg drawer and it is expensive and also one of the few greens Gary will eat. Definitely going to do better in future. x

Ah thanks Tania – great to know I’ve inspired you… I’m going to be trying harder too!