What’s it like….being a First Officer of the world’s largest cruise ship?

Francisco Piñero is a First Officer of the world’s largest cruise ship, Royal Caribbean’s Harmony of the Seas. He lives with his girlfriend in Argentina (his birthplace) and, after becoming bored of playing professional basketball in his early 20s, he decided to join the Maritime Academy, where he studied for three years.

After spending the fourth year at sea (getting the sea time required for the course), Francisco joined Royal Caribbean as an Apprentice Officer on Allure Of The Seas and, after qualifying in 2012, was called to join Explorer Of The Seas sailing off from Bayonne, New Jersey to the Caribbean and Bermuda. Here we find out more about what his day-to-day job requires and what he loves most about being at sea…

First things first, how did you get to become a First Officer of the biggest cruise ship in the world?
Two years ago the company was asking who was interested in joining this fantastic project. I sent my name in and then it was up to the Captain to choose who he believes makes up the best possible team for the ship. Luckily, I was part of the team of officers who had the privilege of taking the ship out from Saint-Nazaire for the first time.

Can you describe what a typical day is like?
It starts with a coffee, followed by another coffee and it ends up with…more coffee!! But seriously, after the morning coffee I go to the Bridge to open my emails, see what's new around the ship. Harmony is like a floating city, with many departments involved and one big goal in common, so we all need to keep up to date on this. After that I open my work planner to see what we will be doing that day and, after doing my secondary duty (supervising firefighting appliances, lifesaving appliances, safety training or navigation) it's time to do my primary duty – sit in the conning chair and drive! That's the most exciting and fun part of my job! After doing 6 hours of watch keeping (in port or at sea) it's time to get off, eat some dinner and maybe go to see a night show!

What are your responsibilities as First Officer?
Our primary duty is to be what we call ‘Officer of the Watch’, which means that we are representatives of the Captain at the Bridge (as he can’t be there 24/7). After keeping watch (which includes keeping the passengers, crew, the environment and the ship safe at all times), our responsibilities vary from arranging inspections of firefighting equipment to correcting the nautical charts for a certain voyage or training the crew in crowd management. It’s very broad what we are prepared to do on board. 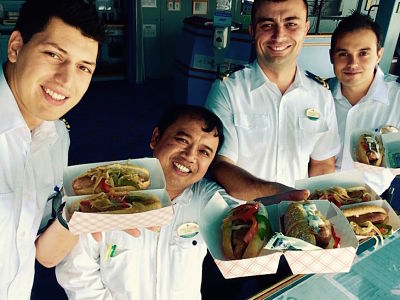 How many things do you have to think about when in control of the ship?
A lot of things! Every time the Captain asks “Are we ready to sail?”, I go through several checklists in my head, make the necessary phone and radio calls, as well as visual observations and tests, to eventually answer “Yes, Captain!”. It’s stressful at the beginning I'm not going to lie, but as you progress and become more experienced, situations that seemed to be stressful are not anymore. They actually become exciting, like sailing in a heavy storm!

What’s the best thing about your job?
That I get to handle the biggest, most advanced and incredibly beautiful cruise ship in the world! And having six months’ vacation a year isn’t bad either!

And what about any downsides?
Growing up with a father who worked in sailing we missed a lot of family moments. Nowadays technology brings us together in a way that it never did, but it’s hard not being able to be there when somebody needs you.

What do you get up to when you are not working?
I watch a lot of TV series in my cabin, go to the gym and watch the amazing Broadway shows that we have on board!

What’s your favourite area of the ship?
Definitely the Bridge (of course!) as we have the best view from there! 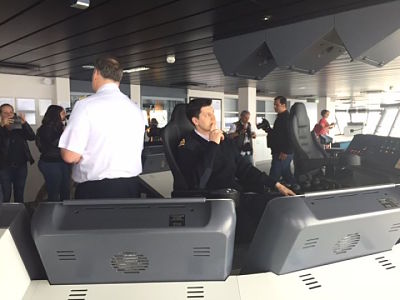 Have you been on the Ultimate Abyss?! (the largest slide at sea)
Yes – and I loved it! It's amazing to be standing that high in that glass platform looking down! And then when you go, it really accelerates! But you land softly in the Boardwalk Neighbourhood – and then go to Johnny Rockets for a cheese burger!

What’s your favourite fact about Harmony of the Seas?
That it combines the best of the Oasis class ships together with the technology of the Quantum class. It's the perfect marriage!

Where do you like to go for your own holidays?
I like to travel and I try to do it as much as I can. One good thing about this career choice – and particularly this company – is that when we sign off, we can stay for a while and see a country before we get our tickets to travel home, so that's great!

What are your hobbies away from work?
I'm crazy about fishing! I've been fishing since I'm a kid and I still do it whenever I can. Recently I discovered kayak fishing and it's super exciting, but quite peaceful – I highly recommend it.

How many hours do you typically work in a day?
Between 10 and 11 hours depending of the day. Sometimes we work 12 hours if something special comes up, but the law is strong on this and we always make sure that no matter how much we do, we always get a good resting period before coming to work. 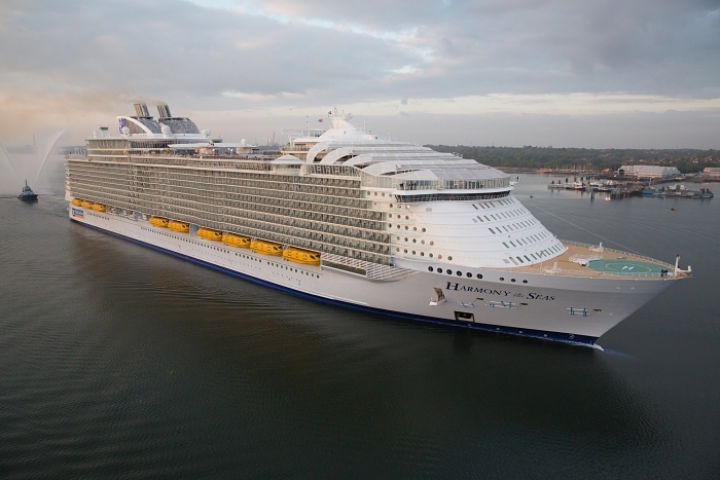 What is one of your favourite sea views?
There are many. If I had to pick one it would be sailing around the Greek Islands as the views are amazing.

What’s your favourite destination?
I like Malaga in Spain – for great food, shopping, beaches and friendly people!

Which destination would you like to go to?
I've never been to Alaska or the French Polynesia! I'd like to visit some day though.

How do you socialise with other crew members?
I have a lot of good friends around the ship. It’s huge with more than 2,100 crew members, so it's a great place to socialize. We go out to relax at the beach, we do tours, we love to try crazy exotic food and have a party from time to time.

What are your career aspirations?
I want to become Captain. It’s actually the highest rank that I can reach in my career and it represents a lot. It’s much more than a title though; the figure of the ‘Captain’ has a legendary meaning and it would be an honor and a privilege to serve as one.

“If you've never been on a cruise ship it's time for you to come! Life is better at sea!”

Sounds similar to being a food blogger with the amount of coffee he drinks! Interesting that he still likes to enjoy one of their night shows even after so long on board.

I think he does! The night shows are pretty good…we went to a comedy night which was really good!

What an awesome and unique job! I imagine driving the boat is the best bit as he says 🙂

Thanks Laura – yes, imagine being able to say you’ve navigated the largest ship in the world – pretty incredible for someone so young!

Love cruise ships you have done a great post, sharing about the officers and the job they do.

This is really interesting. Must be a fantastic job to work on such a big ship

What a fantastic interview”! It was so interesting to learn more about the crew on a cruise ship, And WHAT a ship! I would love to spend some time on that boat travelling around. Perfection to me!

There’d be lots of places to hide wouldn’t there? It’s so vast!

Great interview, very interesting. Sounds like an amazing job to do, with all the places you can go and eat.

What an amazing job! Although ships and boats freak me out lol

oh no! Rail travel for you then I guess 🙂

I really enjoyed reading this post! I’ve never actually been on a cruise ship before. This gave me a real insight into life on a cruise ship, it sounds like such an interesting job – hard work though!

Sounds like a pretty amazing job to have! I have always wanted to go on a cruise, my sister has been on many

I think many people (me included) have always wanted to try a cruise!

What an interesting interview. Francisco’s job as first officer sounds amazing, I would love to have a job that travels all over the world like this.

It must be such an eye-opener to travel RTW!

Great interview,cruise ships are so massively huge….I like the idea of driving a ship,it sounds like fun.

You can easily get lost on Harmony – apparently an even bigger ship is getting launched in 2018!

What a fascinating interview and career choice. We hope he reaches Captain soon – he sounds like a great character!

Ah – he was very sweet (and ambitious) which is great!

Such an interesting interview with Franciso and its so interesting that he quit full time basketball to become first officer. It is great that he is able to travel as much as possible too x

Such an interesting interview! What an amazing job to have

Oh wow how cool! I love seeing the “behind the scenes” especially in a cruise ship! We love cruising, and hopefully, I get to cruise that beautiful ship!

Yes, I’m with you…I’m hoping to be able to do that soon too!

What a fab interview. I have been on cruises when I was younger but never as an adult x

Glad you liked it Melanie!

Thanks Rhian – yes, it must be unsettling for them!

This was truly interesting. The job does require more than I realized. I was especially interested in kayak fishing as my son is getting into that.

Oh wow this was so interestingI I love to hear about other peoples lives and career paths. The greek isles is a favourite of mine too!

It was interesting to be on the bridge – the views were amazing!

Francisco, I was just on the Allure last month! It is indeed beautiful and exciting. I will be going to Alaska next May, on the Explorer of the Seas. I hope you will be able to join all of us on the Low Carb Cruise!

Thank you for being such a great crew member with RCL.

Thank you!! I miss Allure! A lot of great memories! Have a wonderful trip on board Explorer!!