I joined a three-and-a-half-hour Twilight Soho Walking Food Tour in London with Eating Europe to see if it was any good.

I'd taken a couple of food tours in cities before – including a Chocolate, Wine and Dessert Tour in New York – and really enjoyed it, so now it was time to sample one in my own city.!

I met the host of the tour (lovely Hannah), along with eight others outside the Grand Palace Theatre in Soho.

The tour was fairly fast-paced and time seemed to whiz by.

Highlights included experiencing a real English gin & tonic, with a gin-infused beef pie (pictured above); sampling different types of Jamón; nibbling on gourmet tacos in a Mexican tavern; getting a flavour of Chinatown with dumplings and tea; choosing your own pintxos (Basque-style tapas); and (my favourite)…experiencing Soho’s Italian influx in the form of decadently rich tiramisu and spicy hot chocolate.

The great thing about the tour (aside by sampling a selection of gastronomy influences) was the knowledge shared en route.

We learnt things like where the rock stars of the 60s and 70s first recorded and performed, why the area is called Soho in the first place and the location of a secret bunker!

There were just a couple of changes I would possibly make – the option for non-drinkers to have an alternative beverage and, having a sweet tooth, I would have liked the option of a second sampling of dessert at a different establishment – a personal preference of course.

The walking tour costs £75 per person. It's a bit on the pricey side, but the good news is you won’t be left hungry, with generous dish sizes at most places.

Our guide was extremely knowledgeable, as well as entertaining, and made the different areas in Soho’s history really come alive. 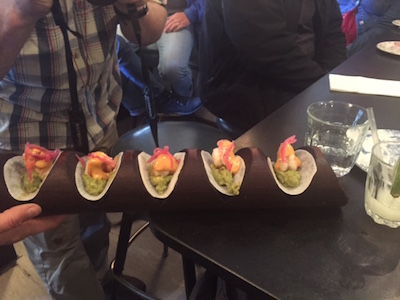 The company caters to vegetarians, vegans and gluten-free diets, and runs daily except public holidays and Sundays from 16:30.

All in all, the Soho Walking Food Tour was a great experience and I'm really glad I went. It was interesting to take a food tour in London, which is effectively on my doorstep; I learnt so much about our great capital, and this in itself helped justify the cost, alongside the great tasty food of course!

Disclaimer: I was invited to try out the Soho Walking Food Tour in return for an honest opinion.