I don’t know about you but I always feel like my hands are full. Sometimes metaphorically, juggling being a full time working mum for example, but other times literally full, with kids’ clothes, keys and, natch, my mobile phone.

As I've previously mentioned on my little corner of the internet, where you’ll find my mobile, you’ll find me; it comes everywhere with me, with the exception of the shower.

And as it’s used to being handled all the time, my precious device is subject to bumps and bashes on a daily basis.

Keeping my phone out of harm’s way, wrapping it up in cotton wool, so to speak, is not an option. So we all invest in phone cases, don’t we?

These are often stylish additions, reflecting our personalities, encrusted with fake diamonds or lined with fur; a vajazzle for our phones, if you like.

The problem with most phone cases is that they often aren’t very good at just being cases.

I know to my cost, one fateful harassed Wednesday evening, rushing, late as usual, to the kids’ swimming pool lesson, juggling with both sets of swimming kit, car keys, house keys, handbag and my mobile.

You can pretty much guess what happened can’t you? Yep…in agonisingly slow motion, my phone proceeded to slide down my body as I tried to cushion its inevitable impact with thigh, shin and finally, trainer.

The phone dinged on the ground – you know, that dainty ding that makes it seem really vulnerable. I scooped it up really quickly as if picking it up in a nano second would affect how much the phone was damaged. Why do we do that?!

I was surprised to see that no damage had been sustained, so I continued on my charge into the pool area, making the lesson with about 10 seconds to spare.

Once seated at the side of the pool, I took a closer look at my phone and it was then that I saw to my horror the crack in the corner of the screen. Admittedly it was a hairline crack, but it was a crack nonetheless.

My case (which in case you were wondering has neither faux diamonds nor fur lining) did not wrap sufficiently around the corners of the phone to protect it. The word ‘gutted' pretty much sums up how I felt.

Ever since that incident I’ve persevered with my case, although deep down I’ve wanted to upgrade to something a bit better.

Plus my iPhone 6 deserved a little TLC. Enter the Peli Voyager*. 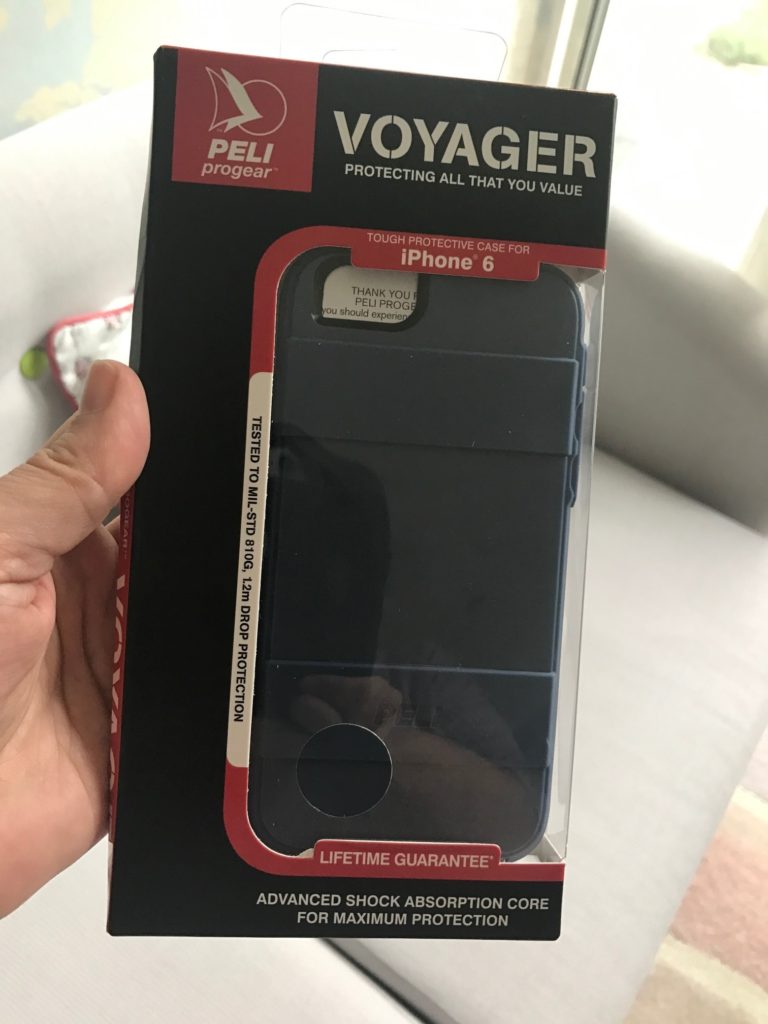 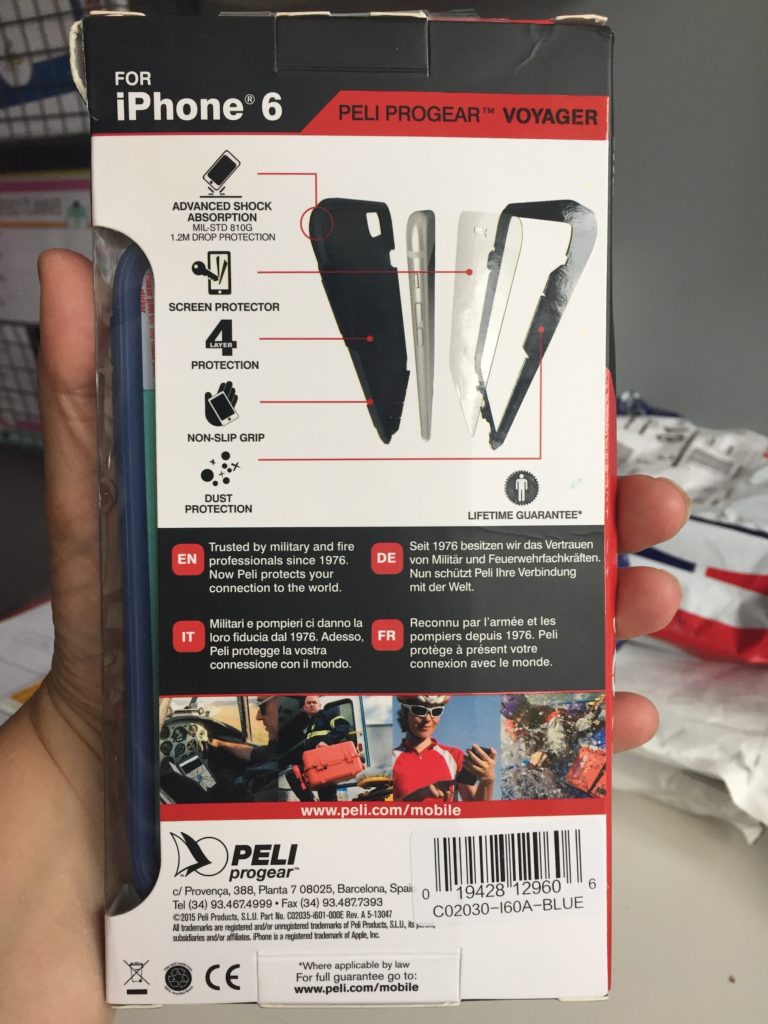 The dark blue colour is unoffensive and the case looks quite masculine and robust.

I gave it a very quick stress test (to see if I could bend it) while it was still in its packaging and it wasn't shifting. So far, so good.

The good news that had I broken it, Peli offers a “You break it, we replace it…forever™” Lifetime Guarantee (where applicable by law).

Without being teccy, I'm guessing that means that I can drop it on the floor from 1.2m and it would still be okay.

I don't particularly want to test this (and I didn’t), but I have a feeling that the time will come for a reoccurrence of the swimming pool incident – and then I’ll find out for real.

If (or should I say, when) that does happen, if I do notice any further damage to my phone, then I’ll let you know.

Drop Tests: Peli exceeds the 810G Military Standard – which is dropping 1 sample x26 times from 1.2 meters – by doing this test PLUS taking 10 more samples at a time and dropping them up to 1.8 meters 6 more times

Button pressing: tested 2,000 times. (I’m wondering if the person testing this had cramp in their fingers afterwards) 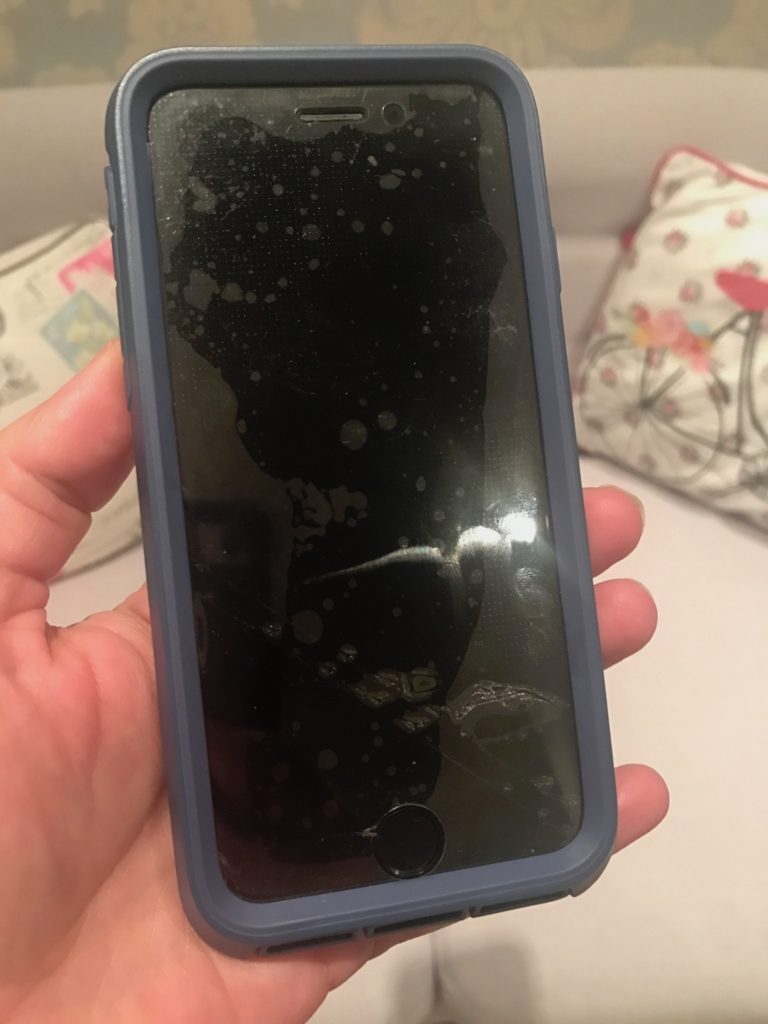 If I were picking a phone case off the supermarket shelf, then I might have dismissed the Peli Voyager as being a wee bit masculine for me.

I wouldn’t have opted for the vajazzel phone though either, but possibly something in between.

However, when we’re talking looks or protection, keeping my phone safe wins every time. And it’s not that the case isn’t aesthetically pleasing (it’s fine!), it’s just built for what it’s supposed to do. And for £29.99 you'd expect something pretty decent too.

The only other thing I’d mention is that the on/off button at the side of the case is a bit stiff – you really have to press hard to get it to react – well, you do on my phone anyway.

And it’s the same deal with the on/off volume. Perhaps this gets easier though the longer you’ve had the case.

And just a note to say that when you first fix the case on the phone you might notice that it has a few bubbles on the screen, which can be resolved by smoothing them out – as you would do with wallpaper I guess!

The case is lightweight which is great as I don't need any more weight holding me down, and the instructions that came with the case are easy to follow.

All in all, it’s clearly a strong case that you can trust to keep your phone safe – even if the kids get hold of it too!

*I received the Peli Voyager from Peli Products in return for an honest review.

[…] I got some protection for my MacBook sorted recently and I just had to do the same for my iPhone 6 – in the form of a Peli Case. […]

I really need to get myself a phone case. I keep saying i will but just keep forgetting

This looks great if protection is what is needed. We have a similar product for the ipad and it makes the buttons harder to press on that too

Thanks Jenni – I guess I can live with harder buttons to press if it doesn’t mean cracking my pride and joy again!

My husband is always dropping his phone and cracking the screen – this looks perfect for him!

My husband is the same – he wants one too now!

As I sit here typing this on an iPhone 6 with a smashed screen, I feel like I need to invest in one of these!!!

I think you’d like it if you did Becca!

A decent phone case is a real essential for me, I’d be so lost without my phone! Good to hear this is so thoroughly tested 🙂
Jess recently posted…Recent Reads

I like a nice and sturdy phone case as I’m always paranoid about breaking my phone. I will take a look to see if they make any phone cases for Samsungs too

I could do with a new case for my iPhone 6 and this one looks perfect. Thanks for sharing 🙂

Im such a clumsy person and i need a phone case that’s bomb proof. I constantly drop my phone with my butter fingers lol. Look for me aren’t high on the agenda it’s all about the protection that the case offers. Love the idea that they will replace it if you break it, thats super customer service 🙂