Well a few unexpected things happened in June, but on the whole it has been a pretty positive month.

It was also the month where I met a load of famous people – something that wasn’t planned! Perhaps I’m attracting good karma right now. In fact, come to think of it, I believe I just might be as I won £25 on the lottery this month too!

Plus the great news is….IGTV has launched! I think it’s gonna be epic. It’s another thing to think about (and add to the to-do list), but I reckon it will take off big time. It’s just strange holding the phone that way to do a video.

Did anyone see the new channel 5 programme, Shop Smart, Save Money with Gabby Rosline and Fiona Philips?

The programme makers contacted me and a few other bloggers with a view to including money-saving tips in the programme.

Sadly, we didn’t make the final cut (say what?!) but we did get featured on the programme’s Facebook page – here was one of my tops tips!

And if you're wondering which app I'm talking about in the video – it's this one.  Plus I'm giving away £5 for free to get you started.

I met the lovely Vicki from Lifestyle Maven. Unfortunately, we only had about 40 minutes together because the day I met her, some guy jumped onto the rail tracks at London Bridge and all Southeastern Trains came to a standstill.

I had booked a day off especially and spent 1.5 hours standing on the train. By the time I got there I was hot, flustered and utterly pissed off. Poor Vicki must have wondered what she had let herself in for when I rocked on up over an hour late sweating and cursing!

Turns out she was very forgiving! Hopefully we’ll get to hook up another time and have a proper catch up!

In the charts (HIBS)

There has been another HIBs jump – from 94 to 80. I’m not sure quite how that happened. I always mean to look into why things happened and get some answers as to what I’ve been doing right – and I really should.

I hear all the time about how actions should be measurable so that we can repeat them if we’re succeeding. I think I just go head first into things without thinking how I can measure them.

Talking of forward planning, I’m seeking a database to download and start using – I just want to use it for contacts, people I’ve collaborated with and be able to make notes etc…. Anyone got any recommendations? I don’t get on with Access, so preferably something else. Even better if it’s free (or great value for money!)

I’ll enjoy it while it lasts though – I’ve heard DA can go up and down, but as long as I meet my objective of staying above 36 by the end of the year, I’ll be a very happy blogger.

I went to Exclusively Homewares show last month, which was fantastic – I’ll be making a video very soon about the hot new interior trends for 2019!

So here’s a funny story for you….while I was there I kept seeing this woman who I thought I recognised. As she passed me for the fourth time that day, I caught her eye and she smiled at me.

This was enough to convince myself that I knew her through work or something similar. So I stopped her.

And as I blabbered on, Aggie McKenzie’s smile got bigger and bigger. It was only when I looked down at her badge that I realised that she was a TV personality!

She must have thought I was a right nutter. I apologised and muttered something about people mistakingly thinking they know her and that she must get that all the time.

She was actually very lovely – and I asked her for a cheeky selfie. Well, I had already stopped her – I might as well prove that I had met the lovely lady!

When I got home and told VIP, he just shook his head at me. I think that said it all. 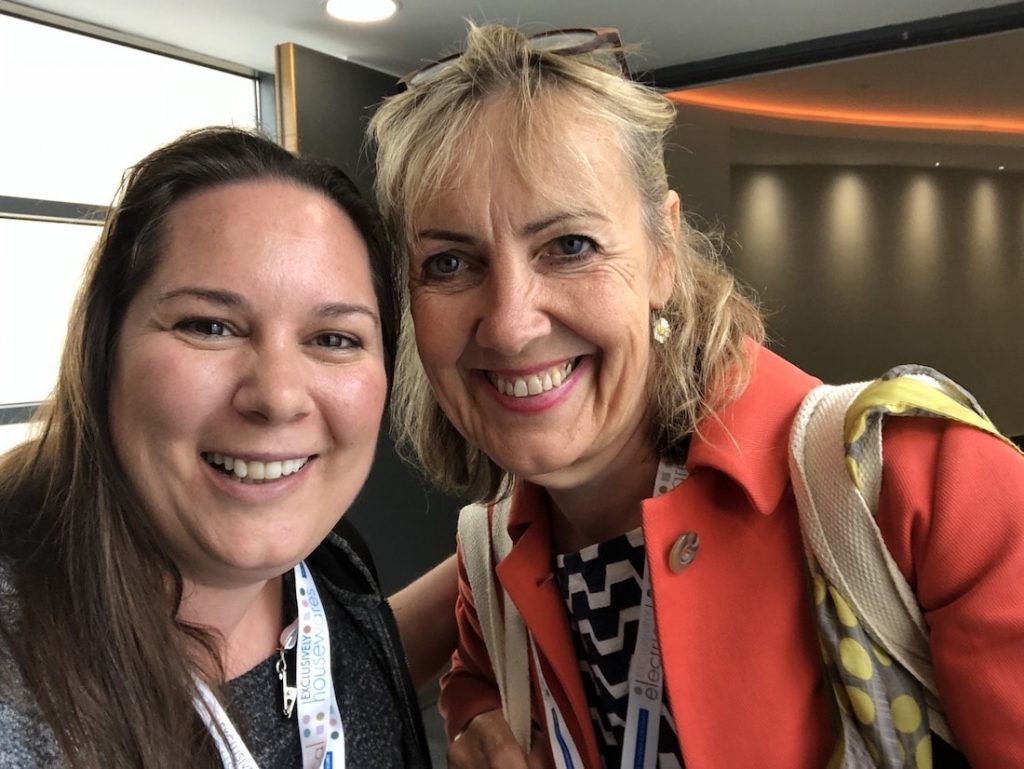 Well I’ve got some great news on the affiliate side of things. Affiliate links are something I’ve tried to build over the last few months, but to no avail.

That is until 30th June when I spotted that I had earned the grand sum of £3.05 following two transactions (for £61). Thank you to whoever made those Whittard Of Chelsea transactions. Mum, was it you?

It’s not much of course, but with anything new it’s small steps to start with. And who knows what these figures will look like a year down the road

Most of the time I’m using Awin to generate sales. One of the good ones I’ve got on at the moment is with VoucherCodes. If you download their free app (to help save you money), I get some brownie points.

They have set my target to hit 100 mobile downloads for the app this month, so if you do have space on your moby for the free money-saving app you’d get me on my way and VoucherCodes will let me stay on as one of their affiliates. And if not, it’s their loss 😉

For the first time since joining BritMums as one of their Round-Up Editors, I have failed to deliver on my monthly Shopping Hauls post. I feel terrible.

I know that BritMums are really understanding when it comes to not meeting deadlines due to other things in life – jobs, kids etc, but I have a strong work ethic so I’d like to think that it’s a minor delay on my part rather than I missed the boat altogether this month.

Apart from better organisation, this month I’ve decided that I need to keep going with the monthly competitions, not least because they attract a fair number of people to the blog, but also because they help bump up the numbers on my mailing list.

After doing a bit of a clean up on my list a month or so ago, I dropped down to 1,549 newsletter subscribers, but after my June blog competition, I’ve now moved up to 1,896.

Nearly 2,000 subscribers without an opt-in magnet isn’t bad, but I really must up my game on this.

And I’ve also realised that as soon as I hit that 2,000 mark I’m going to need to start paying for my Mailchimp account.

As I understand it, a lot of bloggers opt for ConvertKit, but it still seems a lot to fork out for each month. Being thrifty by nature means that I’m going to do a bit more research on alternative newsletter mailing providers.

So my goal from last month was to upload two vlogs in June – and I managed it! In fact, I smashed it with three!

The first is this Shopping Haul from Flying Tiger.

The second was a stay in the Cora Pearl suite at the Grosvenor in London. You’ve got to see this room – I stayed in the hotel’s most luxurious suite as a special treat – it was awesome!

And finally the third video was a trip to Kent’s Hever Castle for its Home Front event. The whole family enjoyed being transported back to the 40s and wartime Britain!

I also got a report from YouTube on my stats, watch time etc. I don’t recall seeing many of these in – wonder why it’s not every month? 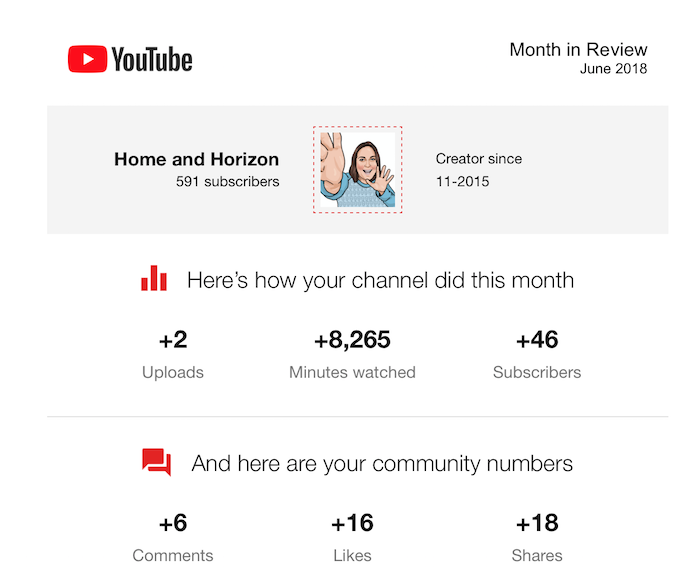 Blogging Month: June At A Glance

What was great? Smashing my goal of making two videos! (and meeting Vicki and Aggie of course!)
What wasn’t? I let BritMums down. But I made myself feel better by offering to submit another one for July – phew!
Goals for July: Take it easy. I’ve actually been really overworked this month and it has properly stressed me out.

p.s. What do you think of my featured image for this blog post (with the cool quote?)…it’s one of my faves.

A Pin for Your Blogging Board 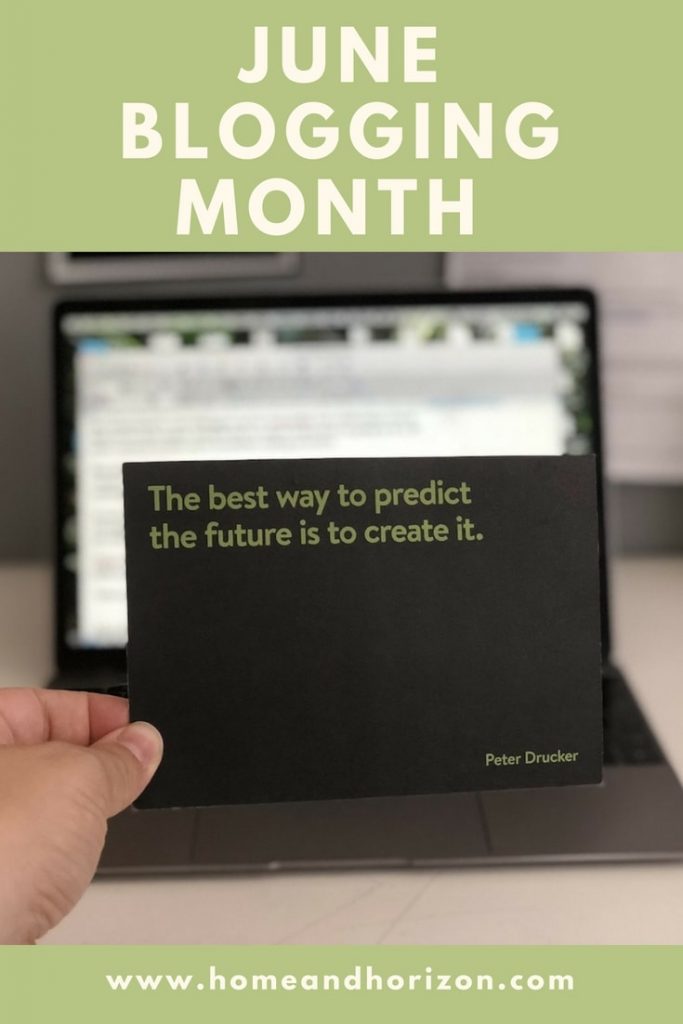 I love the quote, and I love how well you’re doing in everything at the moment. The odds are definitely in your favour1 Also, look at your HIBS rating now! You’re at #32, congratulations!!

Ah thanks Cal – yes, how bizarre…..I’d love to know how that happened!

What a positive month! Great to see how much you got done, and it’s clear all the past work you’ve put into things is paying off too 🙂

Ah thanks Emily – means a lot coming from you! 🙂

Looks like you had an awesome June! Well done on uploading 2 vlogs as well.

congrats on the affiliate links — sounds like overall it was a great month full of surprises and busy busy busy!

Yes, busy as always but I wouldn’t have it any other way. I get bored too quickly!

It sounds like you’ve had a busy month! I’m still working on affiliate income too but I had my first sale this month and it felt so good!

Ah brilliant – it’s great isn’t it? I remember I earned 10p from my first affiliate sale. Make me feel a million dollars though!

Sounds like it’s been a busy month. It’s a shame you didn’t make the final cut but great that they invited you. Well done on the HIBS jump that’s great news 🙂

Thanks Melanie – it was certainly an experience 🙂

Your June seems really busy but with a lot of fun things happening, I have decided to start youtube again but not sure yet what I want to talk about but will see.

Yay! Good on you for giving it another go – let me know and I’ll make sure I tune in!

It’s amazing how quickly those round ups creep up on you isn’t it? I struggled with it from time to time! Sounds like a really positive bumper packed month! 🙂 x

Ah thanks for putting my mind at rest and making me feel better Emma – they come round really quickly! 🙂

Sounds like you have had a super amazing June! So glad to hear that you have finally sorted your affliated link and have started making some money from it. Good luck to you for next month.

Thanks so much. I’ve a lot to learn with the affiliate side of things but I think it’s worth exploring.

You have had a busy June, with lots of things happening. I remember when I got my first affiliate sale, I was so happy. Now I reached a point where it’s normal to get quite a few every day.

Ooh that’s fab Joanna – I think I need to pick your brains!

Yes – you and me both. I have yet to make a video!

Sounds like a busy month! I bet celebs like Aggie get that all the time – you know that you know them but can’t place where from!

Just a bit embarrassing but I think you’re right – she’s probably used to it, poor Aggie!

It seems like you had a great month. I am aware not everything went like you wanted, but you still managed to have a good time and smash your vlogging target, well done!

That’s the first time I think, but better late than never as they say. Thanks Lilinha.

Sorry you didn’t make the final cut on TV but you’re doing really well. Hope July is even better than June.

Amazing progress! One of the fun things about blogging is when you meet people and get to know fellow bloggers. I think it’s one of the rewards because you gain friends and learn from them as well. Looks like you had a pretty awesome month!

Definitely agree with you on this one. It’s one of the best things about blogging if I’m honest. I love meeting new people and learning from them too.

What an amazing June you had and how cool to get on their Facebook page, though a shame you were cut from the actual TV show!
Sarah Bailey recently posted…Tips to Help your SEO

Yeah – it would have been funny to see my mug on the telly! But hey ho, it was all an experience.