Home InteriorsHome Hacks How To Recover After A Burglary
Home HacksInteriors

How To Recover After A Burglary

A friend of mine was burgled recently. I spoke to her two days after it had happened and she still sounded shaken up by the whole ordeal.

In her own words she told me that what was once her sanctuary and safe haven had become a place where somebody – some horrible person – had violated her space.

She felt unsafe in her own home and (naturally) she also felt a lot of hatred towards the person who had done this to her. This would be one memory that she could never shift.

What she told me next is quite common amongst burglary victims: the things that were taken were not worth much, but the sentimental values on those items were priceless.

What hurt my friend the most was that a couple of jewellery items that had been given to her by her grandmother had been taken. These items had stories and happy memories behind them. And for someone to snatch those away from her in a heartbeat was the most cutting of all.

There’s no positive side to being burgled of course, but the horrible ordeal that my friend went through meant that she made a lot of changes to her home. Changes that would ultimately mean that (A) Her property would be a deterrent to most burglars and, (B) She could start to look at her home as a safe place again.

So with my friend in mind, if you find yourself the victim of any type of burglary, here’s some things that you can do to help you recover after a burglary..

It’s pretty common for burglars to break a window, force a door off its frame, or cause some other kind of damage during the course of their crime. To ensure your home is secure as possible, and that you’re not constantly reminded of the horrible experience, repair this damage as soon as possible.

You’ll not only reduce the chances of another crime happening, but will also start to restore a certain feeling of normality. This is the very first step that most people take to recover after a burglary.

Denial, anger, shock and sadness are just a few of the emotions which are very common in burglary victims. If you want to speed up the healing process and quickly recover after a burglary, it’s important to come to terms with these feelings, and accept that you’ve got a while to go until things are totally back to normal.

As the head of your household, you’ll want to put on a brave face, but don’t bottle up those emotions with the world’s most common lie: “I’m fine.” Whatever you need to do, make sure you confront those feelings head-on, rather than telling yourself that everything’s okay.

Whether it’s talking to your close friends, holding family meetings or getting professional help, acknowledging the torrent of emotions you’re going through is essential to a healthy and speedy return to normality.

Get a home security system

According to statistics, it’s common for burglars to return to a house they’ve already burgled, looking for the valuables they think you’ve replaced.

However, you can deter this kind of repeat attack by installing a quality home security system. I actually received one of these for Christmas (review post coming soon), and I would recommend getting a system that records straight to a hard drive so that you can hand over footage to the police.

How good would it be to know that the burglars got their comeuppance when they have been identified by your system? They needn't cost the earth either.

And as cowardly and vicious as burglars are, most of them aren’t stupid, and they won’t risk a jail term if they see that the homeowner has installed better security measures. Check out these alarm reviews of Vivint Sky to get started.

Following a burglary, you might want to avoid all references to crime whatsoever. Still, if you want to minimise the chances of another break-in, and give yourself better peace of mind, then it pays to know what kind of crimes are happening in the community and where.

Websites like CrimeReports allow you to search for specific locations, and then look at maps marking reported crimes, the date when they were reported, and even the time of day when it happened. You can also sign up to alerts which will tell you when a certain crime has been reported in a certain proximity to your home. Being vigilant is a positive approach of helping quickly recover after a burglary.

Three-point plan to recover after a burglary

Six-point checklist if you’ve been burgled 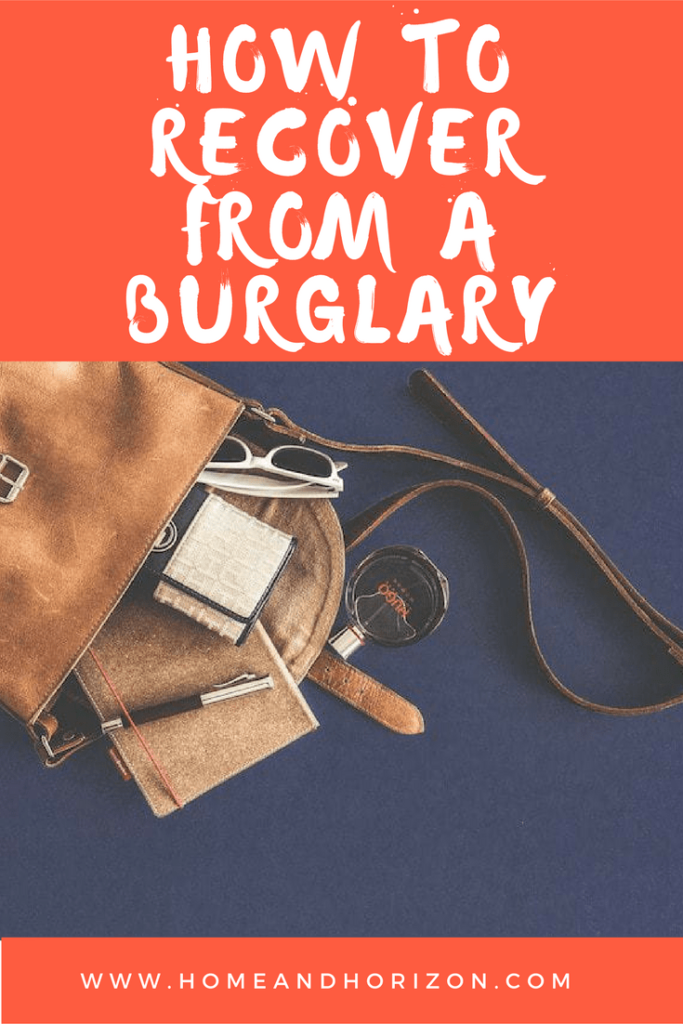 100% would recommend getting a home security system. It’ll give you a lot of peace of mind when you’re away, or sleeping at night. Totally worth the money!

Oh dear so sorry for your friend, what a terrible ordeal. Thanks for the tips as I wouldn’t know where to even begin
Anosa recently posted…{Fashion Monday} Black on Black

How awful!! So scary. I had my car burgled once and that was bad enough. These are good tips and advice x

I would hate to have my house broken into but the one thing I always worry about is the dog everything else can be replaced but she can’t. Like my girls say she’s not a pet she’s family

We have had someone try to get into our flat before and it is an uneasy feeling that someone is attempting to break in, thankfully my mister caught the bloke in the act and he ran away, but even now, some 8 years on I am always wary x

Great post and good advice! I know something about it- 3 of my bikes where stolen in last 4 years. I was terrified, because I felt like someone invaded into my life and took something from it. It can make you feel very unsafe.

Sorry to hear that Kat – it must have been awful. I’m glad you found the post useful though.

Great advice here Lauretta. I can’t imagine how awful it must be to be burgled. The intrusion and the loss of sentimental items must be heartbreaking. We always do things like putting lights on a timer, and having people call round regularly when we are away, which I’m sure helps. My best wishes to your friend. I hope she recovers from her ordeal soon.

Thanks Cal! Putting lights on timers is a great idea – as is having people looking after your home while away.

Burglary is one of my worst fears. It is an invasion of your own personal space and although what they take is just “stuff”, if makes you feel unsafe

this post is really useful. I can’t imagine how horrible it has to be to get a burglary but as you say, moving on and trying to fix the damage is the best thing to do 🙂 x

My sister has been through this, and the way she described it was very upsetting. Must be very hard to overcome. Some really useful information in your post, thank you. Certainly worth a read.

Thanks Jen – if it helps just one person I’m happy ?

This is great information, certainly things to think about when protecting your home. I can’t imagine how it feels to be burgled, and hope I never have to.

Thanks Jo – you and me both.

We had a burglary a few years ago at our old house, they had got in through the patio windows and yet thankfully been disturbed by our dog. I was so upset by it though, couldn’t be in the house on my own and my son was terrified of them coming back. This is a really great post for those feeling the same way.

Thank you and I’m sorry to hear that. I hope you feel safe in your new placex