We’re smack bang in the middle of summer – and I love it! The longer days, the barbecues, people in happy moods and, of course, the (usually) nice weather.

Following a series of mini heat waves over the last few weeks (well, in Kent anyway), I thought it would be useful to do a post on staying safe in the sun.

Why? Well, when you go abroad on holiday you remember to take supplies that protect you and your family from the sun don’t you? So why not in the UK?

You might argue that our weather doesn’t warrant the effort of staying safe in the sun, but here’s a reality check for you:

The British Skin Foundation reports that skin cancer is the most common form of cancer in the UK, and rates continue to rise. At least 100,000 new cases are now diagnosed each year, and the disease kills over 2,500 people each year in the UK – that's seven people every single day!

And here are some headlines that we’ve seen in the papers this year:

And it seems like our little island’s temperature continues to rise: May this year saw the hottest spring Bank Holiday for 160 years according to The Mirror, while just this month, The Daily Mail reported that temperatures in Britain were higher than Hawaii, Morocco and Monaco over the early part of a week.

You wouldn't think that we're taking about the UK would you? Which is even more reason to be vigilant when you and your family are out and about.

So, whether you’re off for a day at the beach, pottering in the garden or just strolling the High Street on a shopping spree, be aware that you could be damaging yourself by not taking precautions.

Here are my top checks for staying safe in the sun:

If you’re over the age of 35 then you may recall the Slip, Slop, Slap motto; Slip on a shirt, Slop on the sunscreen, Slap on a hat.

It was an internationally recognised sun protection campaign prominent in New Zealand and Australia during the 1980s and was launched to encourage people to reduce sun exposure and protect themselves against the risk of skin cancer.

I remember it well and I still live by it today. Hats, extra clothing and sunscreen are my ‘safety net’ items that I pop into my bag for the family if I know I’m going to be out in the sun all day.

If you find that you’re always rushing and often forget stuff when you’ve left the house (who doesn’t with kids?), consider putting together a ‘backup bag’.

You can keep it in the car and keep it topped up. Mine consists of: an emergency drink (Capri Suns/Fruit shoots), a pair of sunglasses, caps, wet wipes (a godsend!), insect repellent, sunscreen (with at least an SPF of 30 or higher), aftersun and a cardigan. 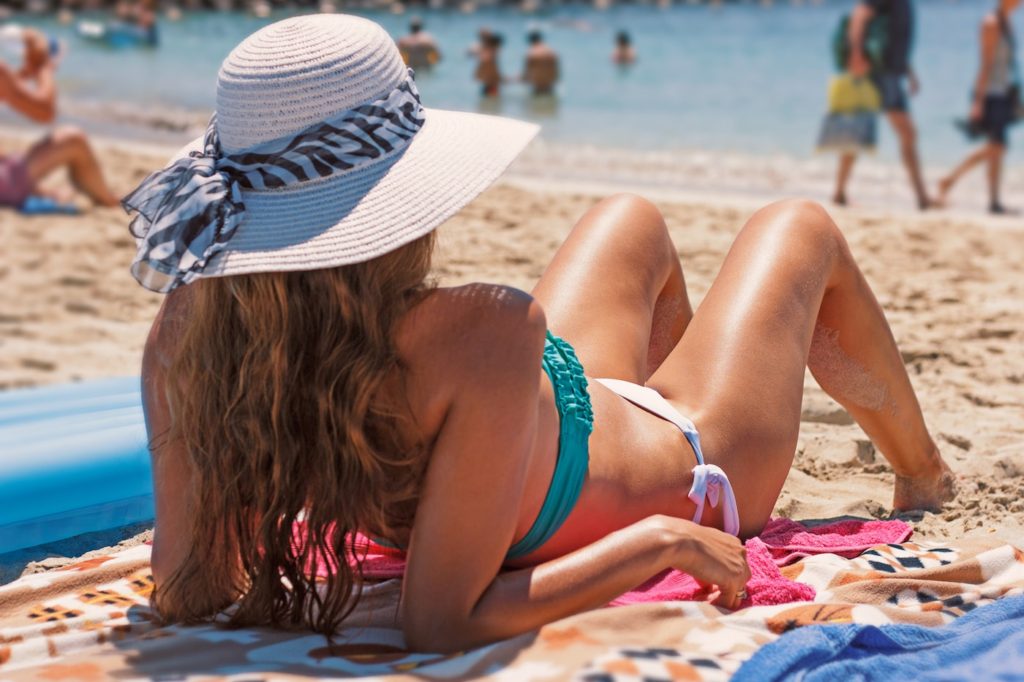 According to internet reports, UVB rays are the strongest between the hours of 10am and 3pm, so if you’re somewhere you’ll know you’ll be in direct sunlight (e.g a festival or the beach), try to seek shade where possible.

Lucky for me, I get too hot and bothered sunbathing; I’m much happier reading a book under a parasol all day – and I still seem to pick up a tan even when I spend most of the day avoiding the sun!

Talking of shades, make sure you always have some to hand. I have 3 pairs of sunglasses, which might seem a little extravagant, but it does mean I’m never unprepared.

I keep a pair in the car for when I’m driving; a set by the front door for when I’m walking to the shops or on the school run; and sunglasses in my handbag for when I’m out and about.

For the best eye protection you’ll need to look for sunglasses that protect you from 99 to 100% of both UVA and UVB light. This includes those labelled as “UV 400,” which blocks all light rays with wavelengths up to 400 nanometers.

Lucky for me I tan very easily which is surprising considering my mum's ginger, but then again I’ve clearly inherited my dad's Turkish genes.

However, it doesn't matter what colour you are – you can still get sunburnt. Yes, really!

And don’t think that faking the tan means that you’re protected when you start basking in the sun; it just doesn’t work like that.

Sadly, according to one recent survey, over a quarter of Brits will choose to avoid sun cream altogether whilst on a holiday overseas, with a further 25% admitting they avoid protection for at least for the first few days.

Why? Well, reasons included people don’t want it to slow down the tanning process, they don’t want to run out as it’s so expensive or they simply find it too much hassle to use.

Let’s look at these in more detail…

1. Slowing down the tanning process…The best way to get a tan AND make the most of the sun safely is to do the following: Exfoliate, moisturise, fake tan it, apply suitable protection sunscreen and then bask at your leisure.

Don’t overdo the sunbathing! If you’re in the sun for longs periods between 11am and 2pm (when the sun is at its hottest) you’re opening yourself up to more risk, so perhaps sunbathe for half an hour and then rest in the shade for half hour: alternate between the sun and shade and keep hydrated!

2. Sunscreen is expensive: Well, it’s worth spending a bit extra to get the right suncream protection for you and your family, but it doesn’t have to be crazy expensive. I spotted this family pack (below) in Boots for just £10 which will see you and your family through the whole summer. 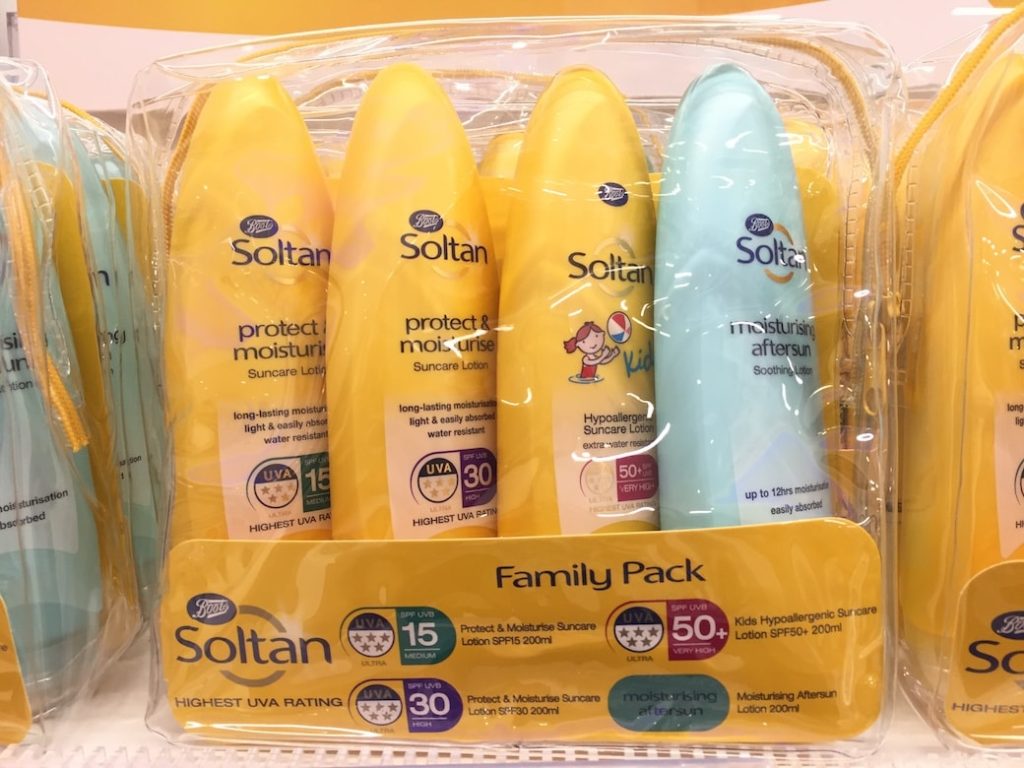 3. It’s too much hassle: is it really worth risking your health because you couldn’t be bothered to spend a few minutes looking after yourself? Not just that, but if you’ve ever had sunburn you’ll know how much it can ruin a holiday – it’s not worth the aggro!

There are so many great products on the shelves these days; products that take into account our time-poor lifestyles.

For example, rather than using lotion to apply sunscreen, you can now pick up spray. This means that you just spray and go – and you don’t need to get your hands greasy!

You can also buy products that protect you for hours without needing to reapply, as well as those that are safe to use in the water – AND that you’ll not need to reapply once you’re out of the water.

So you see, there’s no reason to cut corners when it comes to you and your family’s health, especially when we’ve never had such a wide range of products to choose from.

All you’ll have to worry about is where you’ll be heading off to this summer!

*I teamed up with Holiday Gems to help raise awareness of sun safety this summer. Get more ideas on how to keep sun safe this summer!

I am always making sure the children are protected by I have a tendency to forget myself. I think most mums need to be reminded to protect themselves too.
Rachel George, Ordinary Hopes recently posted…“What’s ‘normal’ anyway?”

Oh yes – don’t forget about yourself! But I haveto admit…I’ve done the same before!

I’m a big advocate for sun safety! I once had a blister the size of a tangerine on my shoulder as I burned so bad. These days I take all the precautions to prevent sun damage.

Oh I remember the slip, slop, slap campaign and the times the sun is at its strongest so still live by those. I’m naturally super pale so I have to really take care in the sun (and usually just fake it!)
Helen recently posted…Hello Skin Biore Baking Soda Cleansing Scrub*

They have some good tanning products on the market luckily!

I get too hot and bothered and tanning too, I much prefer to be in the water but I like to use SPF to protect me against the suns rays. Its important to take measures to protect your skin from too much exposure to the sun x

Its really important to be safe in the sun, we use Aldi sun cream, really good quality and price

It is so important to keep safe in the sun.I’ve never really tanned before but this year I have – however I made sure I was adequately protected also!

Good to hear you are tanning safely Rebecca!

I am off to Canary islands soon so I will definitely keep all this advise in mind. With the risk of skin cancers, you have to protect your skin in the sun.

Have a great holiday – glad you found the advice useful!

I burn so easily that it’s easier to stay in the shade! Great tips, although I think you’ve jinxed the weather by writing this! 🙂

Oh no ?‍♂️ hasn’t someone developed a self sunscreen application for the back yet?!! Lol

We’re a family of fair-skinned, fair haired, burn easily people, so we’re quite careful about sunscreen and hats (although not as careful as we should be sometimes, especially Dad!). People can be so blase about sun care, but the after effects can be literally deadly in years to come. I hope more people take your sun care advice!

Thanks Cal – sadly sometimes people need to see the effects the sun has or can do to them before they think twice about letting it happen again!

I just don’t think we understand the importance of suncare in the UK, possibly because we assume we should only wear an SPF when it is sunny x

Exactly Rachel – I always opt for foundations which have SPF in them if I can as the sun has an enormous impact on ageing doesn’t it?

It’s so easy to incorporate sunscreen into our routines. Once the habit is developed it’s so much simpler than one imagined. I tend to tan easily as well, but since I’ve been living in the UK I seem to have developed a sun allergy! That gave me a big wake up call about the importance of taking care of ones skin. x