It seems that the closer we get towards the end of the year, the busier I become, with various collaborations, trips abroad and new schedules I'm trying to stick to!

But I can’t complain – it’s all good fun and I’ve had the opportunity to work on some great projects, which has been very rewarding.

In preparation for this blog post, I had actually started writing a lengthy piece about the disappointing exchanges that I had encountered with a company that wanted to collaborate with me.

I wanted to illustrate what could happen to other bloggers and to warn them of companies going back on their word when all the hard work had been done.

It was the second time that this had happened to me and I was adamant that it wouldn’t happen again. As it turns out, the company saw the error of their ways (after I told them how unprofessional they were) and therefore it would be unfair to name and shame them.

What I can do, however, is show you a few questions that I drafted to send to brands to determine the exact content deliverables on a collaboration to avoid similar scenarios happening again.

One thing that I have discovered is that some brands want you to actively promote both internal and external links on blog posts (as well as their own) for SEO purposes, while others are not keen on any other links being used, so it's important to find out where you stand.

On to more positive news, I’ve joined forces with Mano Mano where I’ve agreed to become a regular contributor on its blog by taking part in DIY and craft projects.

The company, which offers a whole range of DIY and gardening products, is relatively new in the UK, but they seem like a fun, upbeat company – and I’m happy to be part of that.

Check out my first project with them – a Moroccan-style Concrete Tile Plant Pot – let me know what you think!

DotComGiftShop got in touch to say they wanted to feature me in their ‘Notable Travel Blogs’ and I was thrilled! Have a read of their shortlist and what they say about me #blushing

As blogging and vlogging become increasingly popular, I knew it wouldn’t be long before related phrases came to the High Street. Primark has jumped on the bandwagon this month with this travel cup – think it needs to go on my Christmas wish-list!

Another discovery that I should mention is a free logo maker called DesignEvo. If you’re starting up a new company or blog, then it’s worth a look – not least of all because it’s free!

Who didn’t I meet this month? Wow…having attended two large blogging events this month, I think I’ve met more bloggers in a few weeks than I have in the whole two years I’ve been blogging!

First, I attended #BritMums17 in London to learn about all aspects of blogging. It was a busy (but fun-packed) day and I picked up some great tips. You can read about who I met and who I made friends with!

Next I went to #BlogCampOnBoard on MSC Preziosa and met more fantastic bloggers including (to name just a few) – Laura from Musings of a Tired Mummy; Alejandra from Alejandra’s Life; Steph from Renovation Bay-Bee; and Rebecca from All About U.

It was a great day, only tarnished by the fact that I got a migraine on the way home (caffeine withdrawal I suspect) and my car nearly broke down.

I ended up stopping at Cobham to be sick, climbed into the back of the car for a sleep and woke again at 7pm. I then managed to get myself home before being sick again on my drive. Nice.

I showered then went straight to bed before waking at 6.30am the following morning. I worked out I had about 10 hours sleep – unheard of for me!

I’ve tweaked my vlogging channel recently. Sometimes you have to take a good hard look at what’s working and what’s not, and although I’ve really enjoyed doing The Weekly Scoop (where I showcased 10 New Things in Travel and Interiors), my videos were just not getting found.

My last video got about nine views – and at least half of those were probably my family! But videos such as my ship visit on MSC Preziosa and a recent visit to Primark for a candle haul got a lot more views, so I think I’ll cut my loses and focus more on videos like these.

It’s interesting because I remember the YouTube guy at BritMums17 saying sometimes you just have to take a step back and look at what’s working and what’s not, so for once I’m taking advice head on.

Other videos I made this month included a review of the brand new Novotel London Canary Wharf and the NEXT Bloggers Networking Event with Instagram tips.

My favourite email this month…

…Was confirmation that I had been accepted onto the WTM Digital Influencers’ Speed Networking event at WTM London 2017.

I tried (unsuccessfully) last year to get a place, so I’m really chuffed that I finally get a good stab at meeting loads of travel brands in one go. I’ll be reporting back on what happened next month of course.

Well, I started this round-up on a bit of a dampener, but I’m ending it on a high.

It’s HIP HIP HOORAY all the way – or should that be HIB HIB Hooray?! On Saturday 7th October I was working the blog when I happened to spot my HIBS badge on the side of my page and discovered that I had entered the Top 100 HIBS blogs.

Not only that, but I jumped up by 43 spaces to take the 64th position. I always said I’d have a nice meal out when I entered the top 100 – and here’s a picture of me doing just that! So thanks to all my readers – the loyal ones as well as the ‘dip in, dip out’ – you really have helped make my month. 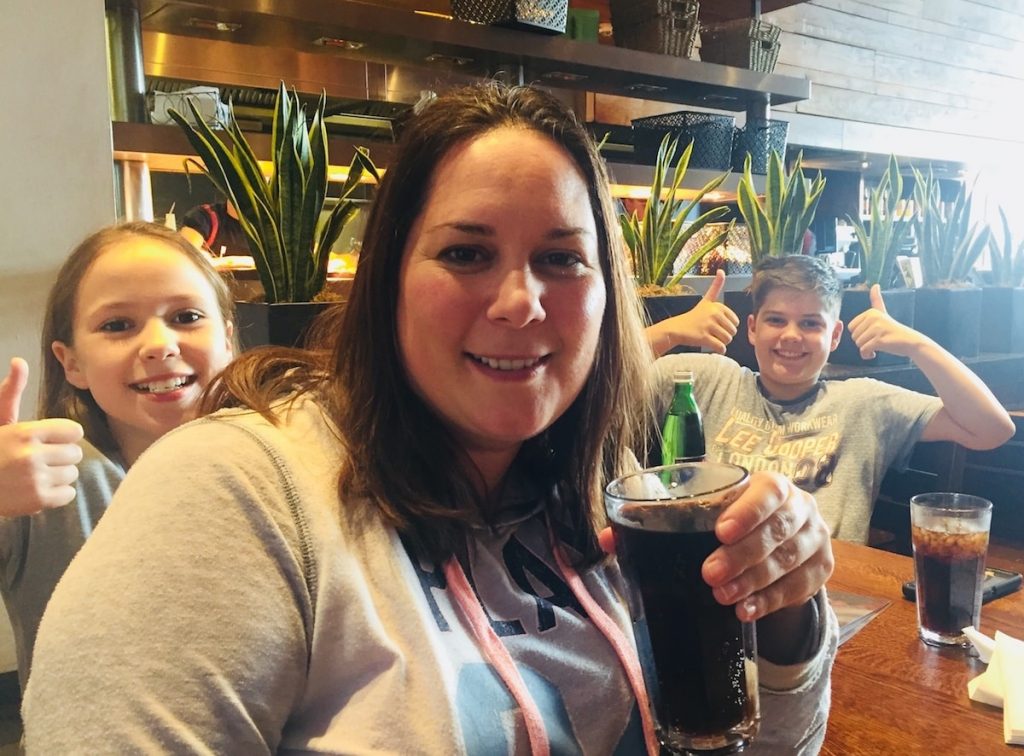 The meal I promised myself

Plus I also discovered that my domain authority has increased. I’d been at 29 for so long but finally passed the magic 30 to sit at 32.  Double celebrations.

What was great? Entering the top 100 HIBS Blogs – sooooo chuffed!

What wasn’t? Getting a god-awful migraine and feeling like I was gonna die on the way back from #BlogCampOnBoard.

Goals for November: More concentration on engagement and wrapping up an Xmas list for Interior fans!

It was great to meet you at #Blogcamponboard (and thanks for the lift afterwards!). Migraines are a nightmare, especially when travelling.

I’m definitely going to check out Mano Mano as I’ve started getting back into crafts this year.

Thanks Nikki – yes do check out Mano Mano – they’ve got some great projects going on…! And do keep in touch!

Thank you so much for the list of things to check and some great advice. Well done for you getting into the top 100 HIBS! What a wonderful achievement. Congratulations.

Thanks very much Emma. It certainly put a smile on my face.

You have a good set of questions to use. It helps to be clear from the start with companies so that no confusion can arise. Well done on being in the HIBS top 100 x

Definitely! I might use those questions to write a blog post…if I can help out other bloggers, even better!

Thanks very much (blushing now)

Love this post! Great to have a focus and see what went well each month. Nice to meet you, and hopefully we can meet again and chat more! Thank for linking to my blog x

Thanks Steph – was super meeting you too. I’ll keep a look out for you at events I attend. Are you doing the YT BritMums this month?

Ah no, I ended up having emergency back surgery the week after BlogCamp. So recovering from that at the mo, it sounds great though. YouTube is something I would love to expand, and do more with. But it’s very scary!!

So sorry to hear that 🙁 I’ll take notes for you if you like?! i’ll probably do a post on it anyway!

Oh gosh… that migraine on the boat was deadly! Me an you sharing lol. Was so lovely to meet you!! Xx

Yes I noticed you were up there with me in the charts – high five girl! Super to meet you too 🙂 x

Most brands I have worked with have been amazing but I have been bitten in the past. There have been some great events this month hasn’t there!

Thanks Kara – yes, some wonderful events this month – and even more to come in November. Think we’ll need some downtime in December though!

You have to be so careful working with brands and can only learn from mistakes so that’s a really useful checklist. So sorry to hear about your migraine on the way home it was great to meet you sorry we didn’t get to chat properly it was so hectic!

Lovely to meet you too Talya – and hope to bump into you at some future event!

This is a great post to read Lauretta, well done on a fab October! Its interesting for me to read about what I should be asking brands too, as a blogger that has no clue on that sort of thing (as you know) its useful to start understanding. Wishing you an amazing November my lovely, you deserve it xx

Too kind Kerry – thank you for being a wonderful friend who always has my back!

Thanks so much. It felt like it would be a million miles away but I was pleasantly surprised 🙂

Gutted I missed the Mac thing. We had a house full of Lurgy
Leona recently posted…Fearless Family Travel #10

It’s a really good idea getting clear information from brands before collaborating. I’ve not had any horror stories yet, but will bare these in mind when discussing content with brands – thank you 🙂

Definitely Helen – thanks. I have had my learning lesson(s) now! 🙁

I can’t believe WTM is next week! I’m so nervous now. But girl you killed it in October. Woo – go Lc!

You’ll be fine Anna – just make sure you have loadsa business cards and don’t forget to pick up the new WTM catalogue in the media centre! x