Every month I showcase 10 New Things – some of my favourite products, ideas and experiences that I’ve come across. It could be anything from a great weekend getaway to a household item, or even a new lifestyle concept.

I only feature items or experiences that I really like the idea of, or that I have used myself. You’ll get to learn more about my tastes – and hopefully I’ll inspire you to try new things!

Disclaimer: Some of the products will have an affiliate link to enable you to find out more information about them. If you purchase them through the link provide, I may receive a small percentage of the sale – a way of saying thank you for my recommendation – and there’s no additional cost to you.

Over this summer, I discovered rock art pens – special pens that you can buy to help decorate stones – hence the name ‘rock art’ or ‘stone art’. It’s become a big trend recently and there has even been some Facebook Groups set up locally where you can decorate a stone, take a picture and hide it in your local area. Others then hunt for the stone you’ve hidden based on clues you set – a fab idea!

I bought these pens from Amazon – and here’s a few stones that my daughter Nadja designed (mine's the dragonfly one on the left!) 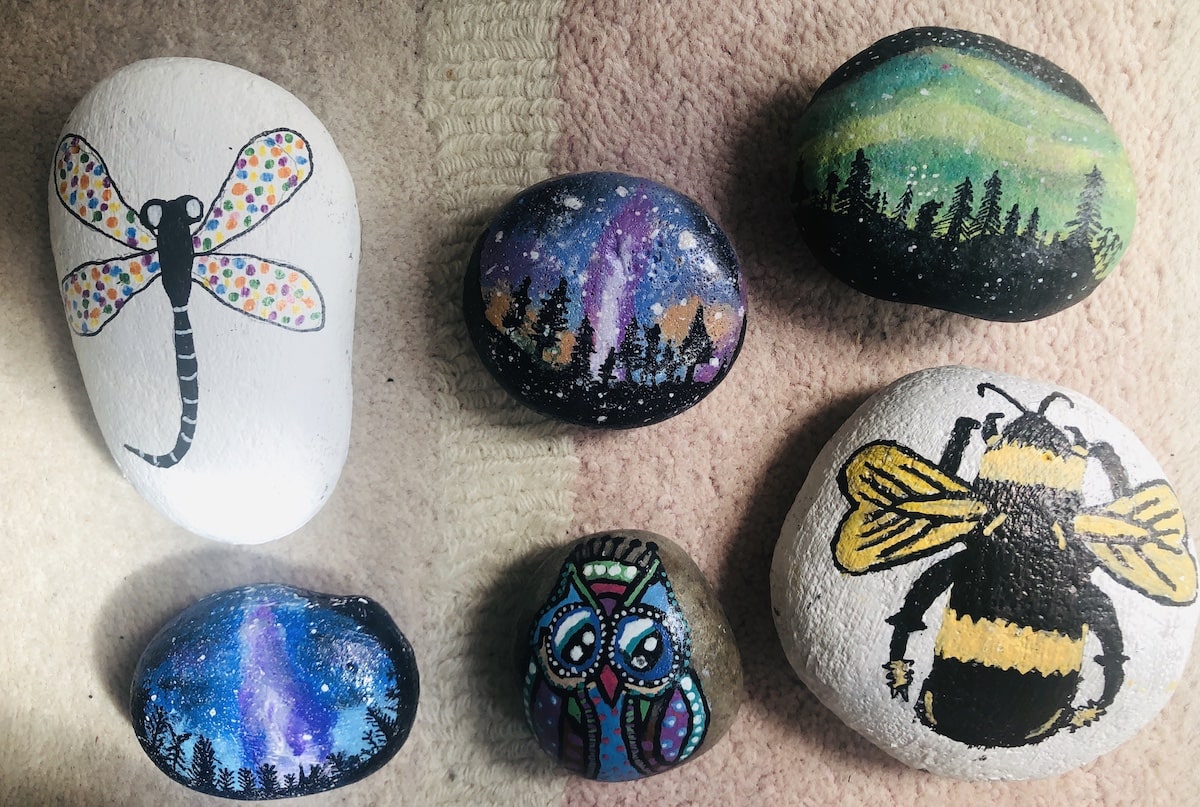 Now that my eldest is about to embark on his GCSEs, he has to start making some important decisions about his future – what he’s interested in, what he’d like to pursue in terms of studying and try some new hobbies.

I asked him the other day what he thinks he’d like to do when he’s older and the words ‘teacher’ and ‘police officer’ were mentioned. VIP (who’s a teacher) quickly tried to turn poor Luis off the profession, while I found myself thinking what a great police officer Luis would make.

When I mentioned it to a friend, she told me about the Volunteer Police Cadets, run by the Metropolitan Police. They offer two groups – a junior police cadets and a senior police cadets. So I’ve made enquiries to get Luis signed up to attend a few sessions to see what he thinks – and give him a taste of the job!

There are plenty of other types of cadet groups out there – air cadets, army cadets, sea cadets etc.. anything that will help them get away from the screens can only be a good thing!

Dare I say it, but autumn is on its way – I’m much more of a summer girl if I’m honest (especially as I have no hair at the moment and I really feel the cold!), but there’s no denying that cooler climes are on the horizon.

So I’ve been checking out Cox & Cox’s new autumn range – and these faux rose sprays caught my eye.

The thing is, not many people know this – and I do need to educate some of my nearest and dearest friends – but I’m allergic to real flowers. I LOVE real flowers – their smell, the way they look etc.. but I have a condition called Hyperosmia which means that strong smells – like those associated with flowers – give me really bad headaches and in some cases migraines.

As a lifestyle blogger, many a time I’ve been offered the opportunity to trial a flower service or product and I sadly have to decline it. But the idea of faux flowers that look real – now that’s something else. So this little bunch will probably make it onto my Christmas wish-list!

I love liquorice – especially red liquorice and a few weeks ago I came across the most divine one I’ve ever tasted.

It’s called Batch 37 and it really hit the spot for me after I bought it in Sainsbury’s. When I went back to pick up more, it looked like it had been discontinued. I then looked in Tesco, Lidl and Waitrose, but couldn’t find it either. It was only when I went off on a one-off trip to ASDA last week that I found it!

It costs £1.50 a bag and I was really happy to rediscover it. I was telling VIP about it and the next thing I knew, 8 bags arrived in the post for me – he’d gone and found it on Amazon and thought I’d like a secret stash to enjoy. Romance isn’t dead! 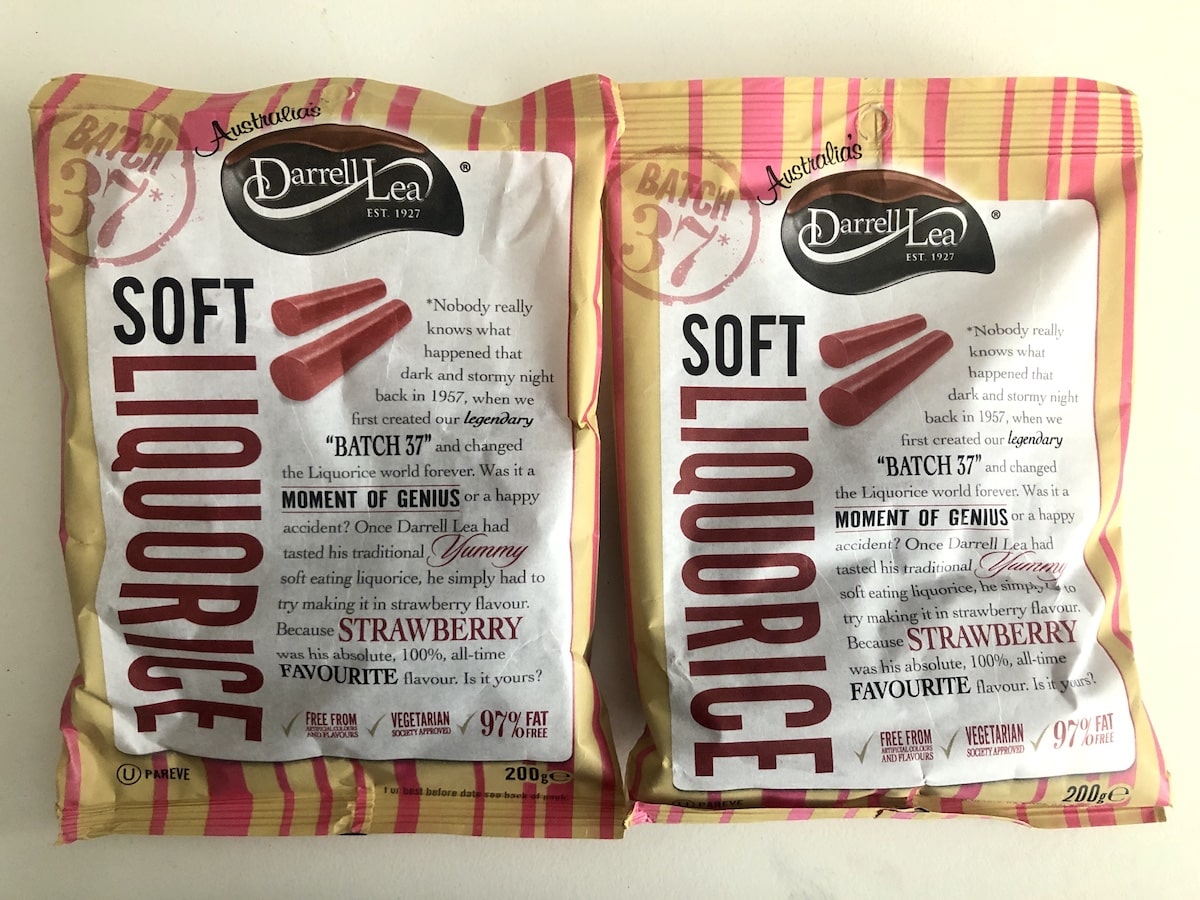 I always think that I’m a highly sensitive person – I steer clear of the news as it’s mostly downright depressing, get teary over sad films and feel myself welling up when someone does a good deed or a nice gesture.

So when an article on being a ‘Highly Sensitive Person’ popped into my inbox, I went off to have a read. Turns out that around 15-20% of the population can be categorised as ‘HIPs’ and that they are finely in tune with the smallest of details.

This is definitely me – I pick up on social signals and mood changes very easily – and when an argument arises in our household – I tend to run and hide to avoid confrontation. So that’s why I sometimes find it testing having a defiant teenager who thinks he knows so much more than I do – I knew there had to be a reason!

Apparently, there are advantages to being a HIP – including “better at spotting and sidestepping errors; scoring high marks in conscientiousness, making them great partners, friends, roommates, and coworkers; great at understanding people and their emotions; Creative thinkers and strong intuition…” See – there’s a silver lining after all!

I love coffee table books and I recently came across Creative Paris, which now takes pride of place on the table in my lounge.

When the TV ads come on, I dip in and read about real life homes and apartments in Paris, featuring amazing photography.

The people behind the book, My Little Paris, have come up trumps in showcasing their amazing homes – and there’s more than 30 to get inspired by; from a relaxed apartment on the edge of the Canal Saint Martin, to an old carousel factory in Montmartre houses.

If you’re interested in treating yourself – or a fellow interiors fan – the hardback is available on Amazon for £25.

I recently published a blog post on upcycling wooden spoons into garden markers.

It was a popular post and something that can be done with the kids – again to get them off the screens and inspire some of their creativity.

I was having a think about this, but you could use old wooden spoons for a variety of purposes – used as a decorative items in a jar/vase; as wall art (you could make numbers of a clock); to make puppets; as paint stirrers; turn into a bird feeder (or perch!) ….and these are just a few I thought of. 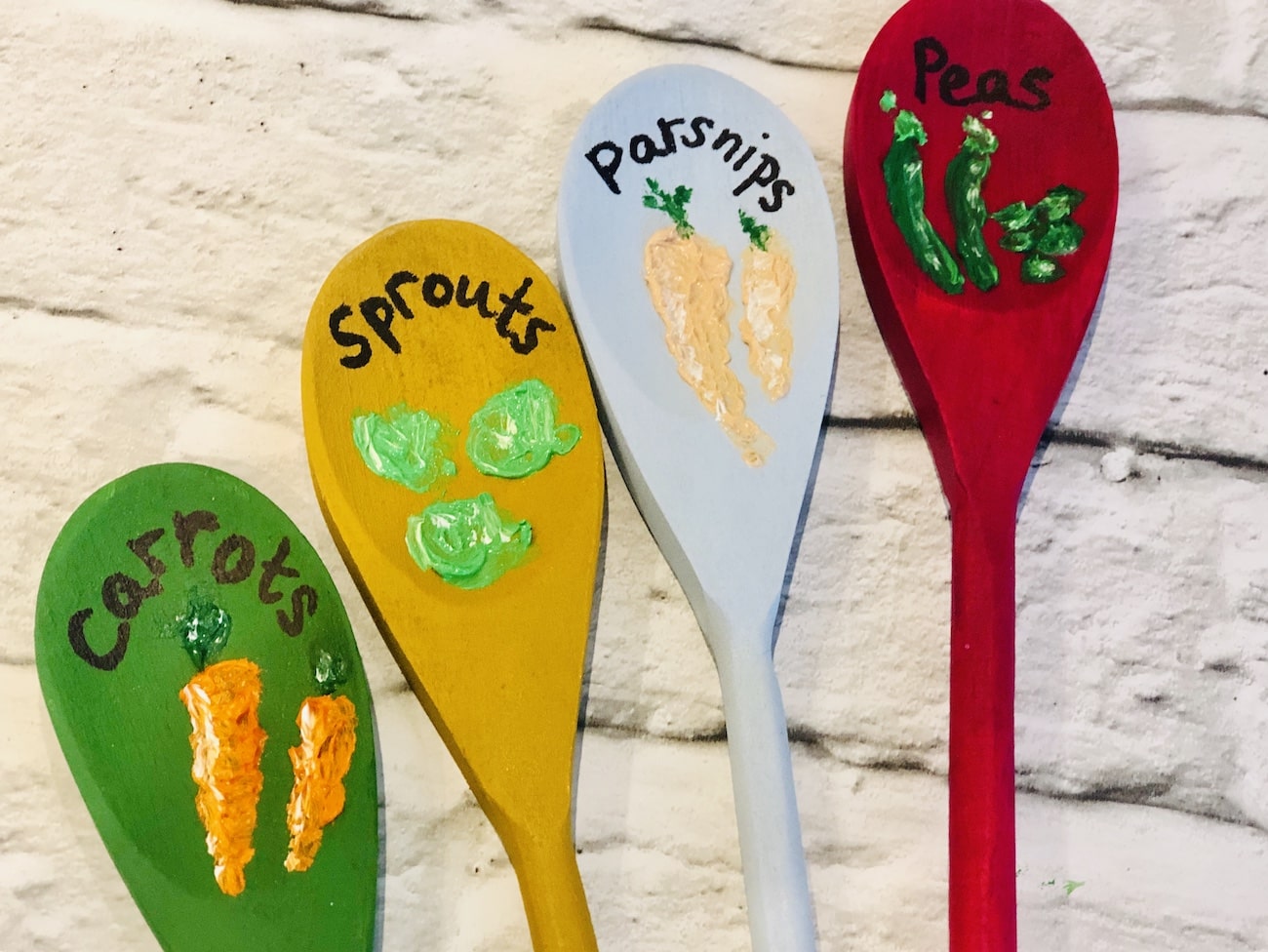 I recently heard that the The Week Junior magazine has launched a weekly podcast for families – what a fab idea!

I used to buy my kids The Week Junior to read about what’s going on in the world – despite their mother shying away from the news, I’m only too aware that they need to know what’s happening worldwide and keep abreast of important issues.

It was getting expensive buying it every week, but what a fab idea the podcast is – I’m certainly going to have a listen and aim to get the kids to listen in with me. The podcast is aimed at 8-14 year olds and features anything from life on the moon to the Amazon Rainforest fires.

The month-long campaign Organic September, aims to raise awareness of Organic products, and the brands, producers and farmers who bring them to us in the UK.

I happen to think it’s a great idea – and since being diagnosed with breast cancer just a few months ago, I’ve made it my mission to go as organic as I possibly can.

Yes, it’s more expensive with things like organic olive oil – and even the daily food items like banana, but at least it offers peace of mind.

Organic products contain no artificial additives or preservatives, fewer pesticides (derived from natural ingredients), conform to high standards of animal welfare, contain no genetically modified ingredients and have been produced in a way that is sustainable. It’s a no-brainer right?

I popped into Sainsbury’s the other day, who were switching all their seasonal goods over. I always love it when supermarkets do this as it inevitably means that they get rid of some of their old or discontinued wares.

So I was thrilled when I came across this Rural Retreat wipe clean tablecloth – I had been looking at updating mine for a while and picked this up for just £8 – it was originally £16.

Seek and ye shall find as they say! Until October – have a great September! 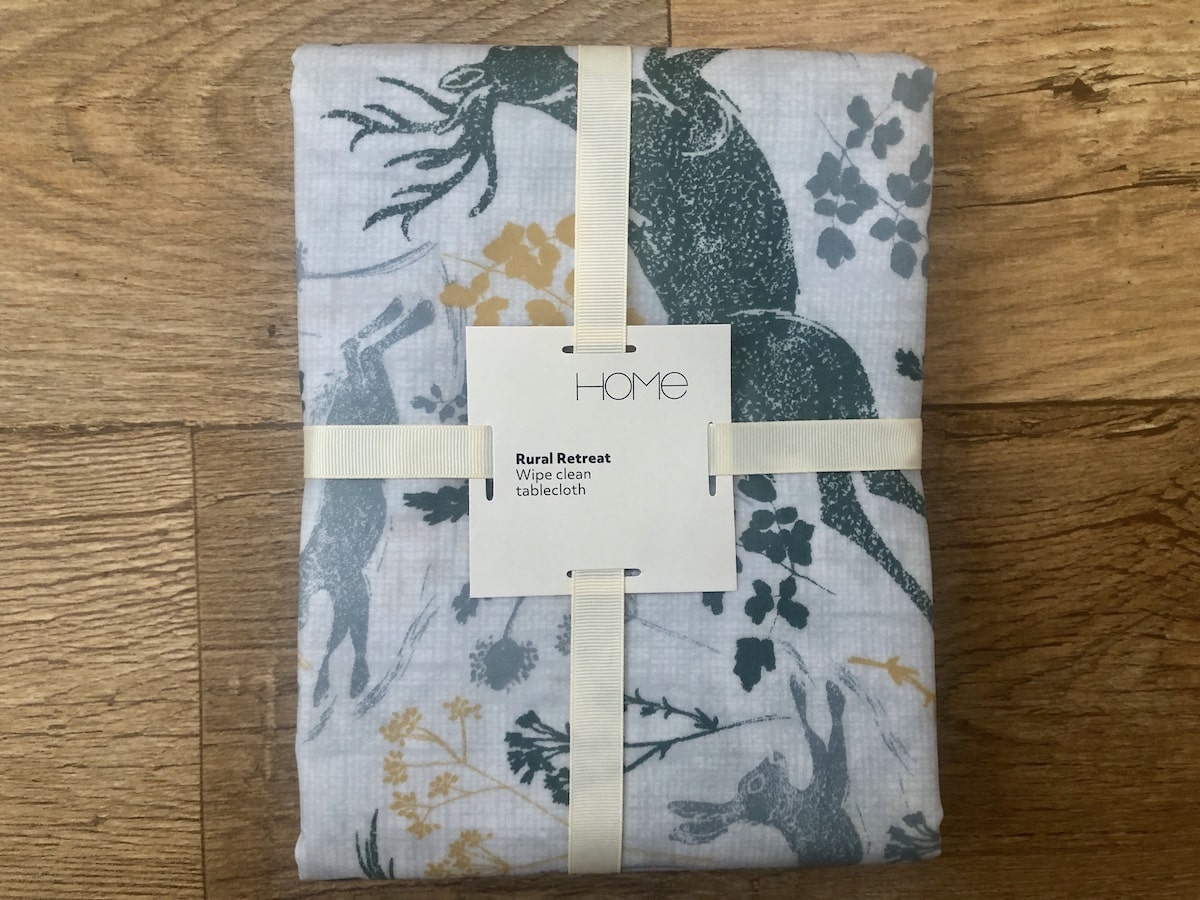