It appears that I've reverted to an over excited teenager, about to go on a first date.

This can only mean one thing: I've been invited to do something on my bucket list without having to dig out the credit card or I've won a large sum of money on the lottery. This time it's the former.

I've never been on a cruise ship and in just a few days I'll be boarding the world's largest cruise ship ever built, Royal Caribbean's Harmony of The Seas, along with countless other journalists, people who work in the travel industry and maybe even a few famous faces. 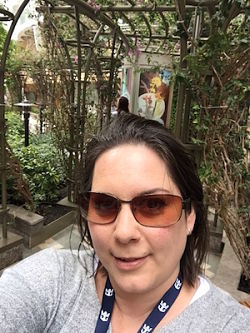 In ‘Central Park' on Harmony

The invite is for a two-night ‘VIP sailing' ahead of the ship's public launch and there has been a lot of hype in the press about the launch of Harmony; my favourite headline being the BBC’s ‘I like big boats and I cannot lie'. Brilliant.

It’s times like this when I remind myself how lucky I am to do the job that I do. Despite the constant time pressures, the long hours, the late nights and the fact that I'm rarely thanked for my efforts, the perks far outweigh the cons…

I have four things on my mind at this stage: (1) Will there be crowds at the port to wave us off?) (2) Will I get sea sick? (3) Will I spot any famous faces on board? and (4) What happens if I get lost and I can't find my stateroom? 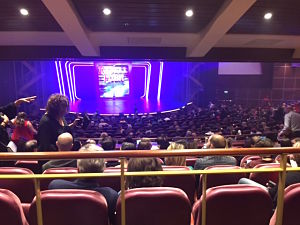 The ship will have a series of what they call ‘Immersion sessions' and I signed up for three of them – a bridge experience (I've got to check out what the Captain's view is like!), a Suite experience, which highlights the best of the best suites, and a Galley experience where we get taken on a behind-the-scenes tour of the kitchens to find out how over 6,000 passengers are fed on a daily basis (think of the amount of storage needed!)

So the big day has arrived. Making sure I've packed US adaptor plugs (otherwise I won't be charging my iPhone and MacBook) and checking I've got my passport (for the 50th time!), Mr Wright and I set off for the two-hour drive to Southampton praying that we won't come up against severe traffic delays. 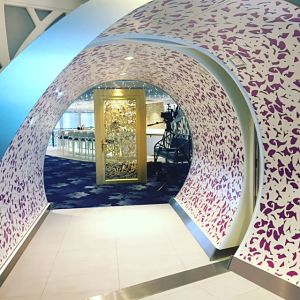 We arrive in Southampton in plenty of time and I catch my first glimpse of Harmony. Despite the grey skies as her backdrop, she’s looking pretty majestic. I couldn’t wait to get on board.

Along the red carpet we went, admiring the pretty flowers and wall-hung signs to further fuel our excitement. Security is a bit like airport security with a conveyer belt and trays into which you put your bags, jackets, belts, laptops etc… except this time there are no restrictions on liquids you can take on board.

As we passed security we were directed to walk down a corridor (the type you walk along at an airport – when you have cleared boarding and are making your way towards the plane). And before you knew it, there she was – well there was the side of the ship. I lifted my head to see up as I was about to embark and I couldn’t tilt my head far enough back to see how tall she really was.

There were lots of personnel surrounding the ship; people in white shirts looking smart and occasionally smiling. But I think I had the biggest grin. As we stepped aboard, our details were checked again and we were told that our passes would be waiting outside our stateroom. We then got on a mini escalator (yes, inside the ship!) and headed to our stateroom. 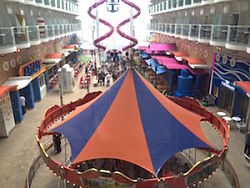 It was pretty easy to find and waiting outside was a nice man by the name of Joey. Joey would be our go-to man if you like – he showed us around our stateroom and told us if we needed anything, to let him know.

We were located on deck 14, which was towards the back of the ship (the aft). Our room had a balcony with chairs and a table – but I had a feeling it wouldn’t get much use in the two days we were on board – I wanted to explore this ship – and fast! 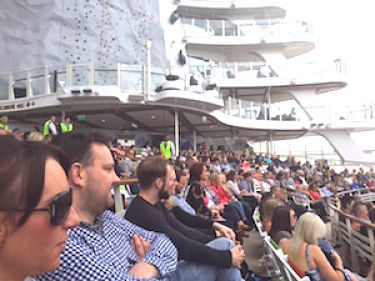 Once we dropped off our bags and collected our passes (which were our stateroom ‘keys’ as well as our expense card) we left the room to explore. We had about 3 hours until ‘Muster’ (will explain in a mo) and I wanted to take as many pictures and videos as I could.

I suddenly started to feel quite anxious – and I knew exactly what it was. I was slowly realising the enormity of the ship I was standing on and I was getting worried that in just 2 days I wouldn’t be able to see all the places I wanted to. I wanted to explore every nook and cranny there was, and my anxiety was the realisation that I probably wasn’t going to be able to achieve this. But I was going to give it a bloody good go!

So Mr Wright and I spent the next few hours exploring – we checked out the Bionic Bar (a robotic bar tender) and explored as many of the ‘Neighbourhoods’ as possible. There are seven ‘Neighbourhoods’ (large dedicated spaces), with my favourite being ‘Central Park’. This literally is a park in the middle of the ship – and possibly the most serene setting with beautiful plants, flowers, a living wall and upscale dining venues such as Jamie’s Italian. 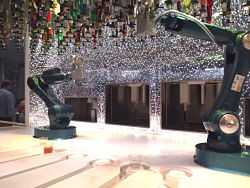 It was then time for ‘Muster’, a mandatory safety session that all guests must attend. The captain also welcomed us (over the tannoy) and 20 minutes later we off exploring again – this time we set our sights on the 10-storey high Ultimate Abyss, which is the largest slide at sea.

Other places we discovered over the next couple of days included the karaoke bar, the comedy club, carousel, the casino, trio of water slides, an art gallery, rock-climbing walls, children’s softplay centre, fitness suite, an ice-rink and the theatre. 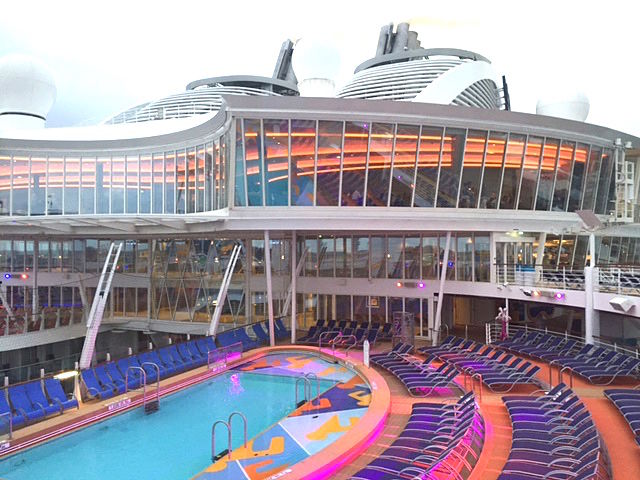 One of the (many) highlights of the cruise was watching the musical Grease – it was also the first time that the cast had performed to a large audience, so it was a big deal for them too and they received a standing ovation for a brilliantly entertaining show. 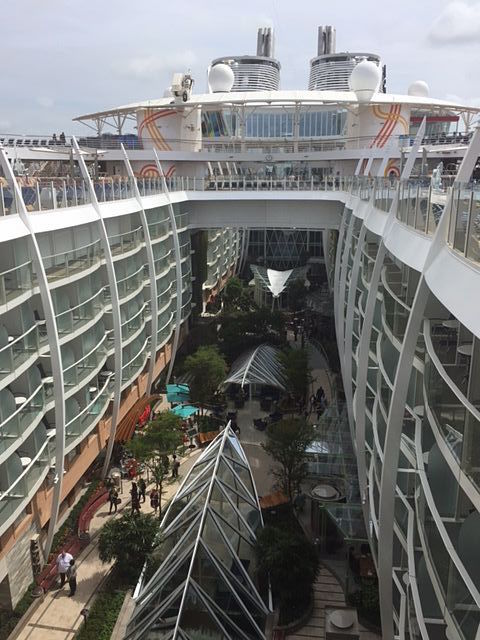 To answer my initial four questions…

(1) Although there wasn’t a huge fanfare to see us off, I definitely felt privileged to be on board. And as I waved farewell to the small crowd of spectators and journalists taking pictures at the port, I felt a sense of pride to be on board – and if I’m honest a little bit guilty that I was experiencing the debut sailing and they weren’t.

(2) I didn’t get sea sick. The ship was that big that only a couple of times did I feel we were actually moving.

(3) There were a few famous faces on board (I asked the PR), but they were mostly people from TV soaps or dramas that I didn’t watch so was unaware of who they were.

(4) I did get lost quite a few times on board, but there always seemed to be plenty of staff around to help point me in the right direction. 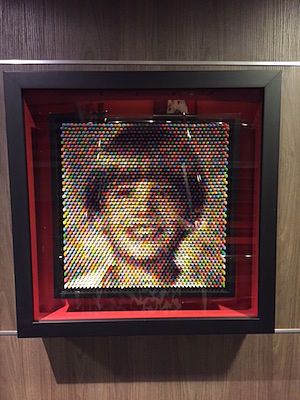 …little crayons put together created this work of art

I simply cannot put into words my first impressions of Harmony, other than to reiterate how big it actually is. And even after two days on board I was still getting lost and still discovering new things to see and do.

Harmony is definitely a family ship and my final impression is that I want to return. I have to return – by hook or by crook. I know the kids would have an absolute ball and despite all that they can do and see on the ship, what’s better than unpacking once, having a whale of a time and waking up to explore a different destination every day?

Wow! What a wonderful experience and privilege you have! Want to try it too, with my family, of course, to make it more memorable and exciting.