I’m generally an optimistic person so I wouldn’t usually start off a post with negative comments (except perhaps when I’m having a Mini Rant!), but for the purpose of this particular observation, I feel it’s necessary.

And if there's one thing that’s unpredictable it’s the British weather. So, taking a leaf out of the Scout's Motto, this month I’m going to be prepared.

Now if it's sunny, then that's great – we'll be out in the garden pottering around and catching some rays.

But if it rains then I'm sorted too; I’ve come up with Five Great Indoor Games for families with tweens.

Actually, since we play the games quite regularly they’re all in my head (and I’ve got more than five – one not so favourite being the ‘IT' Game!), but for the purposes of this post, I’m showcasing my five favourite go-to family games.

Have you ever seen the TV panel show Call My Bluff? If so, this game is pretty similar to that. Say you’re a family of four (although the game can be played with as few as two players), then one person is designated the card reader. There are five categories in the game to choose from – Initials, Film, Person, Place and Law.

So looking at Initials, as an example – the card reader might read: What do the initials T.O.L.S stand for? The players then make up a fictitious association or club – e.g. Time of Our Lives Society – and write this on a piece of paper. When all players have thought of an answer they hand their scraps of paper to the card reader.

The card reader will then read out (in random order) all of the responses PLUS the correct answer, trying not to give anything away (I always get the card reader to hide behind the game box so players can’t see if they are reading the correct (card) answer or the scraps of paper!)

You have to have a bit of a poker face to play Balderdash; many a time I’ve been caught out by someone reading out my answer and I’ve laughed at my own answer – mostly because I’ve either written (a) something totally childish or (b) I’ve been a bit rude.

Sometimes though I’ll try and fool the other players into thinking one of the answers was the one that I wrote by looking shifty or smirking. Balderdash has been my favourite game since I discovered it about ten years ago – I haven’t yet found anything that comes close to making me laugh or amused me.

This is a family game that we made up donkeys years ago. The object of the game is very simple: Don’t laugh! Actually, a game has since launched called Don’t Laugh – I’m gutted I didn’t think of it first as I already had the idea – and was implementing it!

So how does it work? Well we all sit on the floor and the person who is trying to make the others laugh leaves the room to ‘prepare’.

They can get props to help them – or dress up – but when they walk into the room the other players are forbidden to laugh. Smiling is allowed – and even smirking to a degree- but if one teeny weenie sound passes the lips of anyone, they’re out!

So what sorts of things do we get up to? Well, the kids contort their bodies and come into the room putting on an accent. Usually things associated with farting, pooing and weeing will have them in hysterics

VIP will usually come into the room pretending he’s a silverback gorilla which the kids love, and I usually opt for pretending I’m some sort of animal or putting my face next to the kids and pretend I’m sniffing them, which usually has them dissolve into a fit of giggles (especially if you gently blow on their ears while doing it!)

What’s great about this game is that you don’t need any set up – you just sit down and start playing. 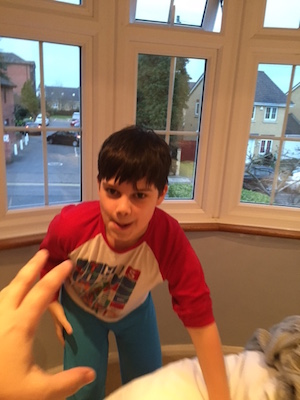 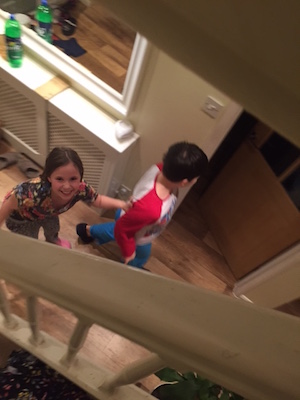 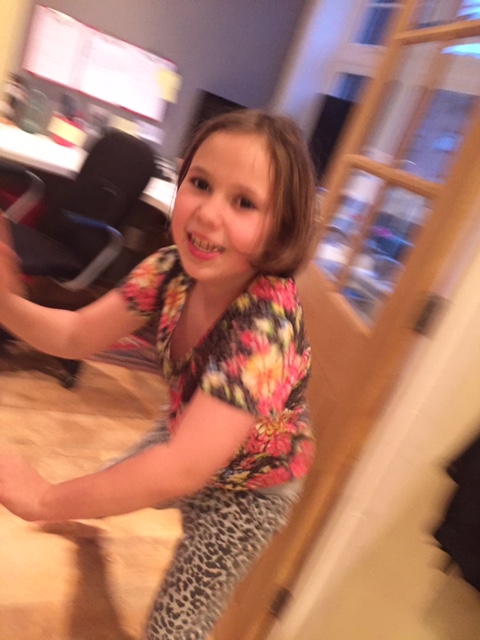 You’re probably wondering why I’ve listed Hide and Seek as a favourite indoor game to play, but seriously…when did you last play it? It’s great fun – and the kids still enjoy it despite being a bit older. And even though I struggle to find some great places to hide (my usual go-tos are in the shower, behind a door/curtain and in the wardrobe), I once disguised myself as a bin bag, which worked a treat – no one found me for ages!

The rules are…whoever gets found first is the next person to count. When we play the person who's counting allows at least 20 seconds (usually 30) to give the other players the best chance of finding a great hiding place.

The best hide and seek I ever did on my kids? I left the house to go to a Slimming World meeting while they were still counting. VIP tells me they eventually saw the funny side, but were not impressed when they had searched high and low for me for 20 minutes.

Anyone remember Mallet’s Mallet? It was an 80s kids show with Timmy Mallet and was fast paced and great fun! The great thing about this game is that you can transfer it to wherever you are – sitting in a traffic jam, at the airport – basically wherever you have to wait as it helps pass the time.

If you’re at home though, all the family sits in a circle and one person kicks off the game by shouting out a word. The gane moves clockwise and the person next to them has to think of a word associated with what the person has just said.

Actually, we did go down this last time and for some reason the kids almost always end up saying ‘poo’ or ‘wee’ because they think it’s hilarious. But is it makes them laugh, that’s great.

There are some rules of course. You can’t hesitate or take too long in answering (hence why it’s such a fast-paced game); and you can challenge a word if you think it’s not associated with the previous one (the person must then explain the connection).

We usually play until the last person wins but it’s great at getting the kids’ creative juices flowing, plus it’s also educational as the kids end up learning new words they haven’t heard before – a win-win! 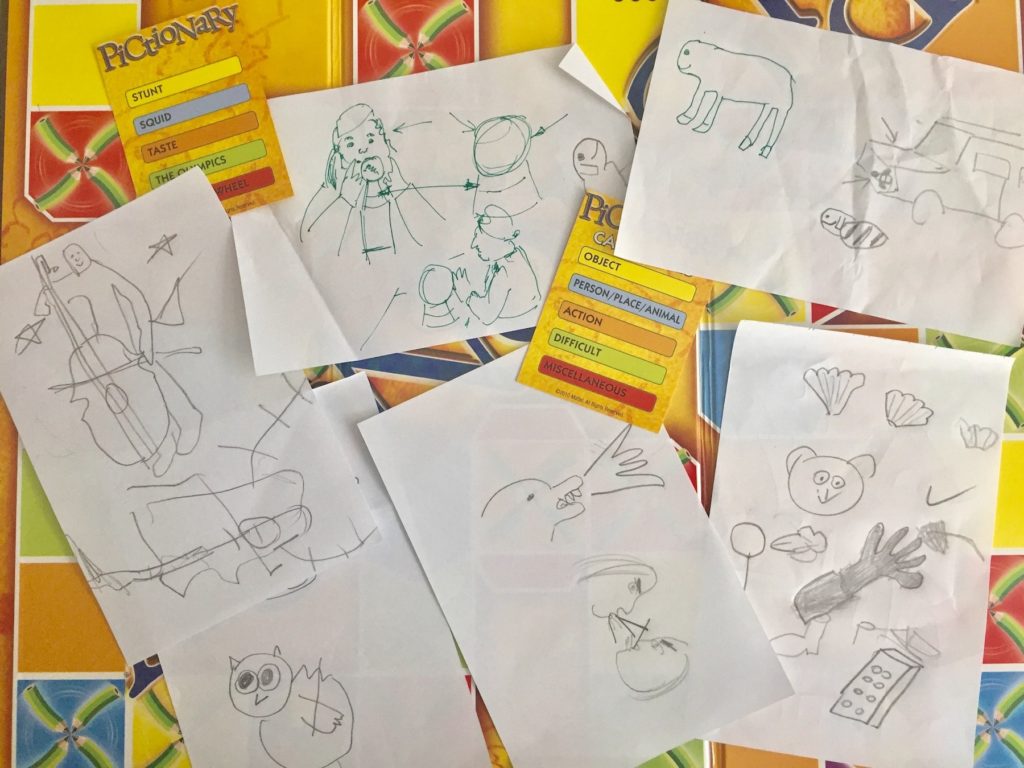 Drawing was never my forte and the kids absolutely love it when I agree to play Pictionary. Why? Because I’m pretty naff at drawing and they howl with laughter when they see my attempts. Mind you, I do the same with my own mum.

You don’t actually need a board game to do this – just 2 pens/pencils and lots of paper. Two people (one from each team) decide what they are going to draw a picture of (without letting the other players hear their decision).

Then on the count of three, the drawing commences – the first person to shout out the correct answer is the winning team.

There are rules – things like gesturing is not allowed or writing words on the picture, but the more obscure you make the object to draw, the funnier the results!

What indoor family games do you enjoy playing – and which of the above is your favourite?

*This post is in collaboration with Provident as part of its ‘Don’t Break The Bank Holiday’ campaign to advise families across the UK on what to do on a budget. Check out more ideas on what to do this Bank Holiday! 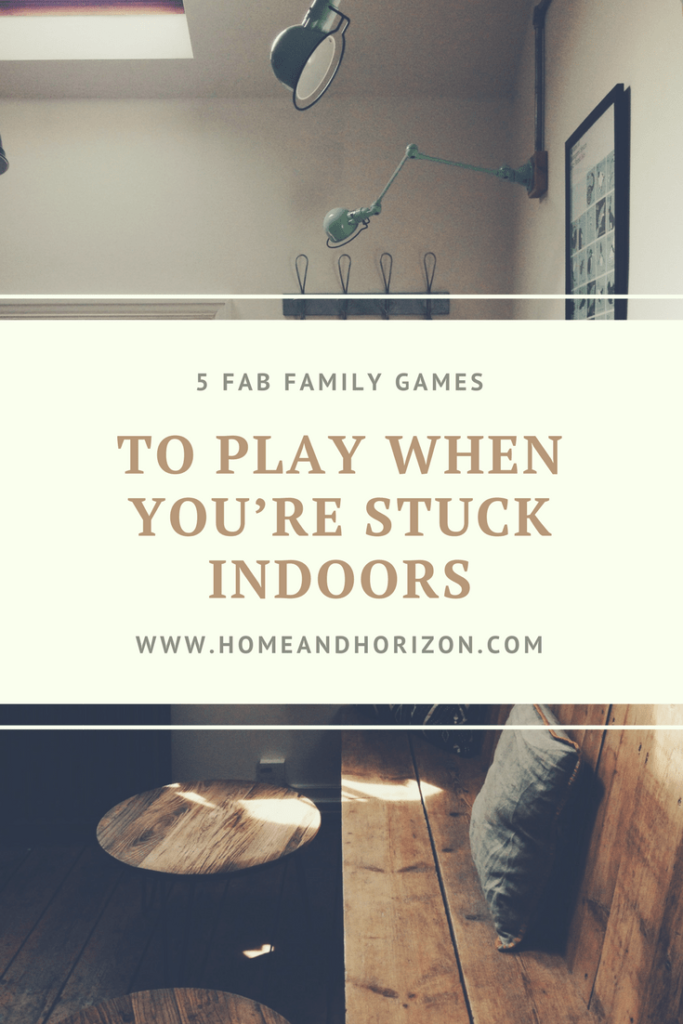 I love hide and seek. I played it while I was babysitting in the kids new house! So many new hiding places!

It’s great fun isn’t it?! We try and play at least once a month – it’s hard coming up with new hiding places though!

The weather has been awful hasn’t it, and games are such a fun way to keep everyone happy! You’ve really taken me back with Mallet’s Mallet!
Zena’s Suitcase recently posted…Visiting London Tower Bridge Exhibition With Kids #insidetowerbridge

Thanks Zena – fun times back then eh?!

WE love playing hide and seek – the kids usually end up in the back of my wardrobe or hidden in the shoe cupboard! lol

It’s still great – no matter what age you are!

ME too – me and my brother would try to recreate it when friends came over!

Fantastic suggestions! The laughing game is my favourite.

Thanks Evelina – it’s definitely one to make you happy!

Why do kids find wee and poo so funny and how do they manage to find a way to get it into EVERY conversation??? Weather has been awful this week, fingers crossed for the next bank holiday…

Yes – fingers crossed….although I like playing the games the garden does need tending to!

We used to have pictionary game. My teen loves board games, don’t speak is her current favourite x

I’m going to look out for Don’t Speak – thanks for the tip! And it would be nice to get a bit of peace and quiet in the house!

I love the laughing game, this is one we used to play all the time and it was so much fun. I loved playing it x

Well, if you’re in the neighbourhood, come join in with us! Thanks Ana 🙂

We used to love Pictionary in our house, and cards are underrated too. I learned to count playnig cards

We always take a pack of cards on holiday with us – they are definitely underrated!

I remember Mallet’s Mallet! I am totally going to resurrect that in our house next time it rains!

I am not very optimistic about the British weather but trying to be slightly hopeful it will be better. At least you’re sorted either way with these awesome games

This is a great list. I have 4 children and I think over the years hide and seek has to be our most played game ever. My kids still love playing it at Grandma and Grandad’s house now 🙂

It’s a classic isn’t it? We normally find one another in less than a couple of minutes though – I think we’ve exhausted all the great hiding spots!

As a Scottish person I always appreciate good ideas for what to do on a rainy day! The game Jibber Jabber is also HILARIOUS, if a bit dribbly! ?

Yes we’ve got that game too. In fact, I think we’ve probably got most games that exist – we enjoy a good laugh!

I love these ideas! I haven’t played Pictionary is such a long time, but love it. I can’t wait until our children are old enough to play these games too 🙂

You do have a bit more choice on games to play as they get older – that’s a positive! 😉